Although 1970’s AIRPORT is generally credited as the first “disaster movie”, it was 1972’s THE POSEIDON ADVENTURE that made the biggest splash for the genre. Producer Irwin Allen loaded up his cast with five- count ’em!- Academy Award winners, including the previous year’s winner Gene Hackman (THE FRENCH CONNECTION ). The special effects laden extravaganza wound up nominated for 9 Oscars, winning 2, and was the second highest grossing film of the year, behind only THE GODFATHER!

And unlike many of the “disasters” that followed in its wake, THE POSEIDON ADVENTURE holds up surprisingly well. The story serves as an instruction manual for all disaster movies to come. First, introduce your premise: The S.S. Poseidon is sailing on its final voyage, and Captain Leslie Nielsen is ordered by the new ownership to go full steam ahead, despite the ship no longer being in ship-shape. (You won’t be able to take Leslie too seriously if, like me, you’ve watched AIRPLANE! way too many times!) 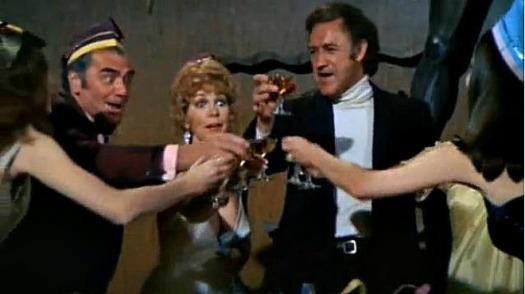 Next, introduce your all-star cast: We’ve got Hackman as a rebellious priest having his dark night of the soul, Ernest Borgnine as a belligerent NYC cop and Stella Stevens as his ex-prostitute wife, Red Buttons as a lonely, health-food nut bachelor, Jack Albertson and Shelley Winters as an elderly Jewish couple sailing for Israel, Carol Lynley as a young, aspiring singer, and Roddy McDowell as a steward. Add youngsters Pamela Sue Martin and Eric Shea on their way to meet their parents in Greece for good measure.

Then, add your disaster: a sub sea earthquake that triggers a freak tsunami, hitting the Poseidon with devastating force on New Year’s Eve, right after the singing of “Auld Lang Syne”! The ship capsizes, and now in order to survive our stars must make their way to the bottom (which is now the top) of the ship and reach the engine room to be rescued or, like all the rest of the supporting players and extras, they’re doomed to die in the frigid waters of the Atlantic Ocean!!

Oh, and let’s add some conflict for dramatic effect: Hackman and Borgnine are constantly at odds, bellowing at each other like bull elephants. Winters is old and overweight; the others think she’ll drag them down. Lynley’s suffering from trauma because her brother was killed, MacDowell’s got a wounded leg, Shea’s an obnoxious little know-it-all. There’s enough suspense, thrills, and terror put before our ten heroes for three disaster flicks, and it all works thanks to the steady hand of  director Ronald Neame (who later helmed one of the worst in the disaster cycle, 1979’s METEOR ).

Let’s talk a moment about Shelley Winters’ performance as Mrs. Rosen. During the late 60’s and early 70’s, double Oscar winner Shelley (THE DIARY OF ANNE FRANK, A PATCH OF BLUE) began giving way-over-the-top performances in whatever she did, and was becoming more and more a parody of herself. Granted, she had recently suffered a nervous breakdown, and was taking roles beneath her considerable talents. Yet here Shelley toned down her act, giving a subtly emotional portrayal, and her bravery and self-sacrifice in saving Hackman’s life, especially after enduring all the cracks about her weight through the film, deservedly earned Winters an Oscar nomination (though she lost to Eileen Heckart for BUTTERFLIES ARE FREE). THE POSEIDON ADVENTURE may be just a big-budget popcorn movie, but it does have a heart and soul; its name is Shelley Winters. 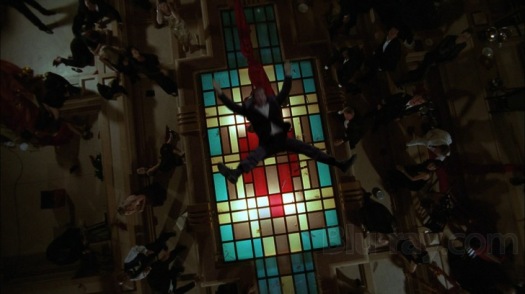 Let’s also have a tidal wave of applause for the stunt crew, set designers, and special effects wizards who made THE POSEIDON ADVENTURE a visual delight… no CGI necessary! Veteran SPFX men L.B. Abbott and A.D. Flowers were given a Special Achievement Oscar for their fantastic technical work, and the film also won for what I consider one of the most annoying songs of the 70’s, the perennial soft-rock snoozer “The Morning After” (well, as Joe E. Brown said in SOME LIKE IT HOT, nobody’s perfect!). Despite that lame title tune, THE POSEIDON ADVENTURE is just as enjoyable today as it was upon first release,  an exciting, fun piece of Hollywood filmmaking that’s endured the storm-ravaged test of time!