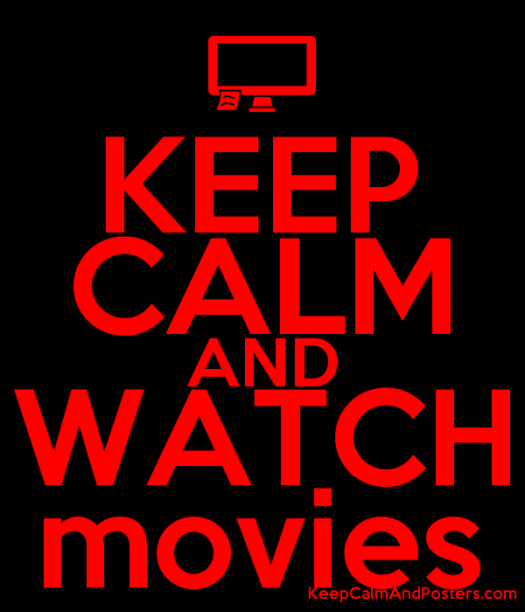 All last week, I was laid up with sciatic nerve pain, which begins in the back and shoots down my left leg. Anyone who has suffered from this knows how  excruciating it can be! Thanks to inversion therapy, where I hang upside down three times a day on a table like one of Bela Lugosi’s pets in THE DEVIL BAT , I’m feeling much better, though not yet 100%.

Fortunately, I had a ton of movies to watch. My DVR was getting pretty full anyway, so I figured since I could barely move, I’d try to make a dent in the plethora of films I’ve recorded.., going all the way back to last April! However, since I decided to go back to work today, I realize I won’t have time to give them all the full review treatment… and so it’s time for the first Cleaning Out the DVR post of 2018! 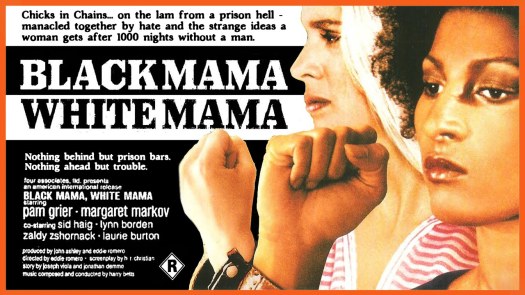 We begin with BLACK MAMA, WHITE MAMA (American-International, 1972), a Philippine-made “Women in Prison” entry by director Eddie Romero, the Roger Corman of the Philippines. Blaxploitation Queen Pam Grier stars as a feisty American hooker who escapes from your typical brutal jungle prison chained to rich white revolutionary Margaret Markov. If you’re expecting something along the lines of 1957’s THE DEFIANT ONES, forget it! Instead, strap yourselves in for lots of nudity (including the obligatory shower scene!), violence, torture, and a tongue planted firmly in cheek. For example, Pam and Margaret jump a pair of nuns and steal their habits in order to make their getaway!

Besides WIP veterans Grier (THE BIG DOLL HOUSE, etc) and Markov (THE HOT BOX), the film features the immortal Sid Haig , who’s a riot as a redneck cowboy bounty hunter hired by the local gendarmes to hunt the girls down, dead or alive! I always enjoy Sid in roles large or small, and here he plays this crazy cracker to the hilt! Also in the cast is Vic Diaz, a mainstay of these Filipino exploitation classics, as the ruthless drug lord ripped off by Pam, who’s also hunting our heroines. Lynn Borden is the horny prison matron who peeps on the girls, and wants a piece of Pam pie! BLACK MAMA, WHITE MAMA is a must for genre fans, who’ll love the violent’n’bloody climax! 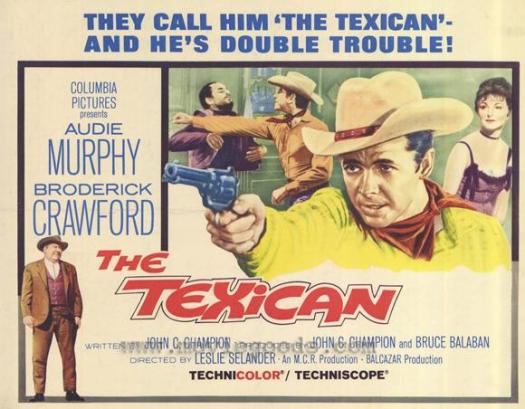 From the Philippines, we travel to Spain for the Eurowestern THE TEXICAN (Columbia 1966), a strange hybrid of traditional and Spaghetti styles directed by sagebrush veteran Lesley Selander. This was Audie Murphy’s first and only foray into the Spaghetti genre, and his next-to-last film. and though he’s a little more clean-cut than most Spaghetti protagonists, he fits in with the material just fine (as a side note, Murphy was one of many Western stars who turned down Sergio Leone’s A FISTFUL OF DOLLARS , for which Clint Eastwood is eternally grateful!). 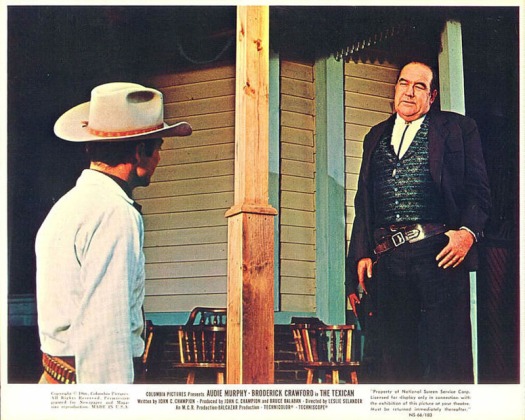 Audie’s still very youthful looking at age 41; unfortunately, the same can’t be said for costar Broderick Crawford, playing the villain who kills Murphy’s brother and triggers this revenge tale. Crawford, at age 55, looks mighty dissipated due to his years of heavy drinking, though it’s still fun to watch him snarl and growl his way through the role of mean town boss Luke Starr. Spaghetti regular Aldo Sambrell appears as Crawford’s right-hand gunman, adding his own brand of ‘foreign’ menace. Nico Fidenco’s score aids in setting the film’s mood, and the showdown in the swirling sandstorm street, followed by final retribution in Crawford’s saloon, is well staged by Selander. If you’re not an Audie Murphy and/or Spaghetti Western fan, you’ll probably want to pass, but those of you who are (and include me in that  number) will enjoy this minor entry in the genre’s canon. 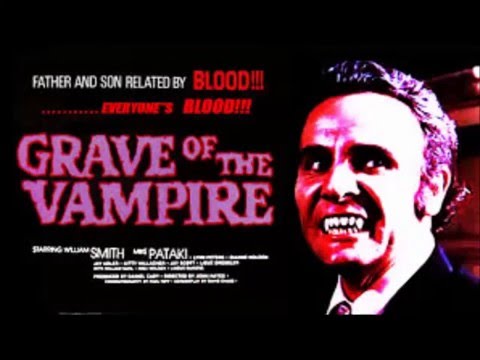 GRAVE OF THE VAMPIRE (Entertainment Pyramid 1972) was a surprisingly effective low-budget chiller I’d never heard of before. It starts in 1940, as two college kids are making out in a cemetery, when a crypt opens and vampire Caleb Croft attacks, killing the boy and raping the girl. This macabre opening sets the stage as the girl later gives birth to a strange little baby who prefers blood over milk! From there, we flash-forward to the 70’s, as the child (now a grown-up William Smith ) seeks to destroy his unholy father, working at the local university under the name Prof. Adam Lockwood. In reality, Croft/Lockwood is Charles Croyden, an 1800’s nobleman whose wife Sarah was burned at the stake in Salem. Lynn Peters plays student Anne, and of course she’s a dead (no pun intended) ringer for Sarah. Michael Pataki makes a pretty fierce vampire, Smith is always fun to watch, and the film even manages to sneak in a Bela Lugosi reference! Creepy and atmospheric, GRAVE OF THE VAMPIRE should be on any horror buff’s must-watch list. 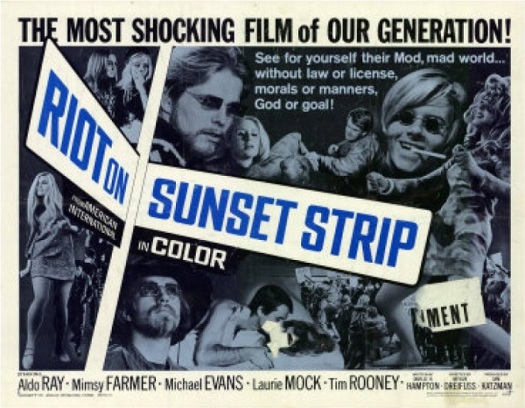 Another surprise was RIOT ON SUNSET STRIP (AIP 1967), one of many Hippiesploitation flicks the studio made during those fabulous 60’s. Aldo Ray stars as Lt. Walt Lorimer, trying to keep the peace between the establishment forces and the kids on the Strip. Walt’s the voice of reason… until his daughter Andy (Mimsy Farmer) is given an LSD-spiked soda at a party and gang-raped by five punks. Mimsy’s interpretive “freak-out” dance is a sight to behold! The movie also features an overacting Anna Mizrahi as Andy’s pink-haired lush of a mom… perhaps she should’ve picked up some acting pointers from husband Lee Strasberg.

The surprise part came for me when some of the great garage bands of the era performed. The Standells (of “Dirty Water” fame) do the title tune, featuring lead singer/drummer/ex-Mouseketeer Dickie Dodd and Russ Tamblyn’s younger brother Larry. There’s The Chocolate Watch Band, who sound like a punk Rolling Stones, and The Enemies, fronted by future Three Dog Night vocalist Cory Wells. The movie has some footage from the actual ’66 riot spliced in, and on the whole is pretty well done for this sort of thing. A psychedelic artifact definitely worth a look. 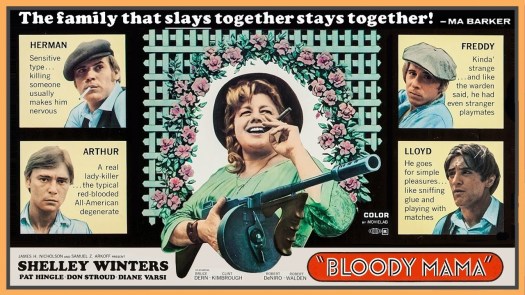 Last but not least, Roger Corman’s BLOODY MAMA (AIP 1970) is one of the  onslaught of gangster epics churned out after the success of 1967’s BONNIE & CLYDE. This one’s a cut above thanks to Corman and star Shelley Winters , giving a bravura performance as the infamous Kate “Ma” Barker without going over the top… well, not too far, anyway! Ma and her cretinous brood (Don Stroud, Robert DeNiro, Robert Wolders, Clint Kimbrough) rob, murder, rape, and kidnap their way to the top of the FBI’s Most Wanted list before the carnage-filled finale, with Bruce Dern , Diane Varsi , and Pat Hingle joining them along the way.

Young Mr. DeNiro plays dope fiend son Lloyd in one of his earliest pictures. In fact, this may very well be his first gangster role! It also marks the feature debut of cinematographer John A. Alonso, who went on to lens VANISHING POINT , LADY SINGS THE BLUES, CHINATOWN, FAREWELL MY LOVELY, SCARFACE, and many other films of note. BLOODY MAMA’s got a lot going for it, and Corman has said it’s his favorite among the many films he’s made.

There are a lot more movies I watched while sidelined, and more Cleaning Out the DVR to come! Next time, we’ll return to the dark world of film noir!