James Stewart and Anthony Mann’s  fourth Western together, 1955’s THE FAR COUNTRY, takes them due North to the Klondike during the Gold Rush of 1896. It’s a bit more formulaic than other Stewart/Mann collaborations, but a strong cast and some gorgeous Technicolor photography by William H. Daniels more than make up for it. The film is definitely worth watching for Western fans, but I’d rank it lowest on the Stewart/Mann totem pole.

Jimmy is Jeff Webster, a headstrong cattleman who drives his herd from Wyoming to Seattle to ship up north to the beef-starved gold miners for a huge profit. Webster killed two men along the way who tried to desert the drive, and barely escapes Seattle before arriving in Skagway, Alaska. There, he unintentionally interrupts a hanging being conducted by crooked town boss ‘Judge’ Gannon, who confiscates Webster’s herd as a fine for spoiling his fun. Webster and his two compatriots, talkative old Ben and boozy Rube, are then hired by saloon queen Ronda Castle to lead her on the trail to Dawson. Ronda’s more than a bit fond of the tall, laconic Webster, as is young French-Canadian tomboy Renee Vallon. But Webster’s got plans of his own, as he and his crew re-steal the cattle from Gannon and cross the border into Canada, where there’s gold in them thar icy hills…

Stewart’s Jeff Webster is an independent sort who has no use for either foolishness or companionship, save that of old Ben. Like all Stewart’s post-WWII characterizations, he’s aloof and bitter, claiming he doesn’t need anybody, but that changes over the course of the film. Walter Brennan once again provides his patented sidekick schtick as Ben, and you can’t go wrong with that in a Western! The women in Webster’s life are Ruth Roman as sexy saloon owner Ronda and pretty Corinne Calvet as Renee. Miss Calvet is an acquired taste; I’m not a big fan, but she’s more than adequate in her role. 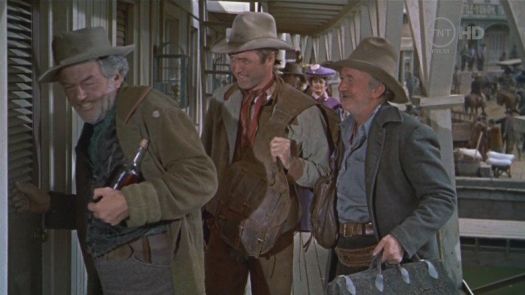 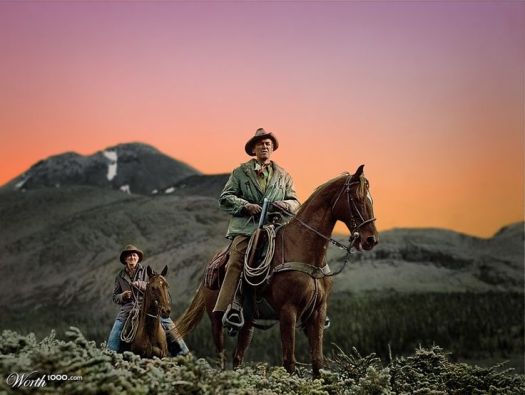 Also in the cast is Jimmy Stewart’s favorite costar, a sorrel stallion named Pie, who Stewart rode in 17 films. The two were first paired in Mann’s WINCHESTER ’73, and worked together until 1970’s THE CHEYENNE SOCIAL CLUB. Stewart and Pie were so in tune that when the horse was called upon in THE FAR COUNTRY to walk down the street alone, foiling an ambush by the bad guys, all Stewart had to do was whisper a few simple instructions in Pie’s ear, and the stallion completed the scene in one take!

Screenwriter Borden Chase began his career writing for the pulps, and his short story DR. BROADWAY was adapted into Mann’s first film as director. Chase also wrote the scripts for WINCHESTER ’73 and BEND OF THE RIVER, but is more closely associated with the films of John Wayne: THE FIGHTING SEABEES, FLAME OF THE BARBARY COAST, TYCOON, and the classic RED RIVER. Daniels’ breathtaking location footage of Alberta’s Jasper National Park add a majestic realism to the movie, and Mann’s direction is on point. Though it’s not my favorite of the Stewart/Mann Westerns, these two could do no wrong together, and THE FAR COUNTRY still makes for an entertaining film.

11 Replies to “Cold in Them Thar Hills: THE FAR COUNTRY (Universal-International 1955)”