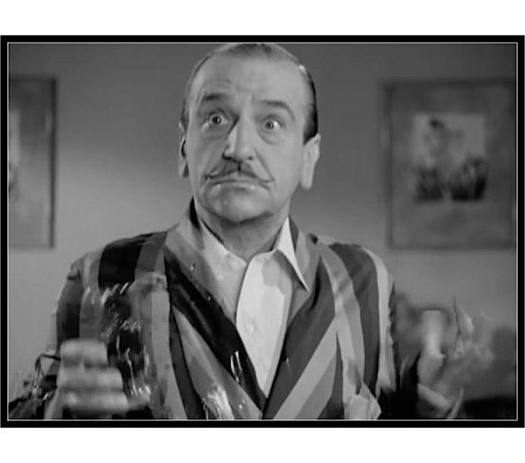 For fifteen years, whenever Hollywood producers needed a drunk, they called Jack Norton. The perpetually inebriated man with the funny moustache made a career out of playing drunken barflies, mostly in uncredited bit parts. Everyone knew they were in for a good laugh when Jack, the ultimate Familiar Face, staggered onscreen. In real life, Jack Norton was a teatottler who never touched the stuff, and learned to “play drunk” by following tipsy people around and copying their mannerisms. Now that’s dedication to your craft!

Jack Norton was born in Brooklyn in 1882, and began his show biz career in vaudeville. He soon moved to Broadway, starring in Earl Carroll’s Vanities. Coming to Hollywood in 1934, Jack played his first lush in FINISHING SCHOOL, an early effort for Frances Dee and Ginger Rogers. After that, his specialty would be in constant demand, though he did do other, non-alcoholic roles, such as reporters in films like ALIBI IKE , PAGE MISS GLORY, and AFTER THE THIN MAN.

Comical drunks became his bread and butter though, and Jack had a long and prosperous career reeling his way across the screen. He worked with all the comedy greats of the era, including the Ritz Brothers (KENTUCKY MOONSHINE), Bob Hope (GHOST BREAKERS, LOUISIANA PURCHASE, MY FAVORITE SPY), Olsen & Johnson (CRAZY HOUSE, GHOST CATCHERS), The Great Gildersleeve (GILDERSLEEVE ON BROADWAY, GILDERSLEEVE’S GHOST ), Laurel & Hardy (THE BIG NOISE), Jack Benny (THE HORN BLOWS AT MIDNIGHT), Abbott & Costello (THE NAUGHTY NINETIES), and Danny Kaye (THE KID FROM BROOKLYN). Jack was featured in the first Three Stooges Columbia short WOMEN HATERS, and again in RHYTHM AND WEEP and MALACE IN THE PALACE.

Classic comedy fans cherish best his turn as drunken movie director A. Pismo Clam in W.C. Fields’ THE BANK DICK , so bombed the producers hire Fields (as Egbert Souse’, not exactly the model of sobriety himself!) to replace him! Jack was also a favorite of Preston Sturges, who used him as part of his stock company in THE PALM BEACH STORY, MIRACLE OF MORGAN’S CREEK, HAIL THE CONQUERING HERO, and THE SIN OF HAROLD DIDDLEBOCK (Harold Lloyd’s failed comeback attempt).

Jack pops up in movies both classic and no-so classic, adding his particular talent to RUGGLES OF RED GAP, SHE GETS HER MAN, GOLDDIGGERS OF 1937, PICK A STAR, THE GREAT GARRICK, JEZEBEL, THE LONE WOLF SPY HUNT, THE ROARING TWENTIES , THE VILLAIN STILL PURSUED HER, COVER GIRL … the list, like a barfly’s story, goes on and on. Illness forced him to slow down after 1949; he made just a handful of TV appearences before passing away in 1958. Jack Norton was never a major star, but his crocked cameos in so many films are one of the reasons we all love watching classic movies so much. Our eyes light up when he pops up three sheets to the wind, and we smile and say, “Hey, there’s THAT GUY again!”. A Familiar Face indeed, and one of those unsung working actors we all know and love!