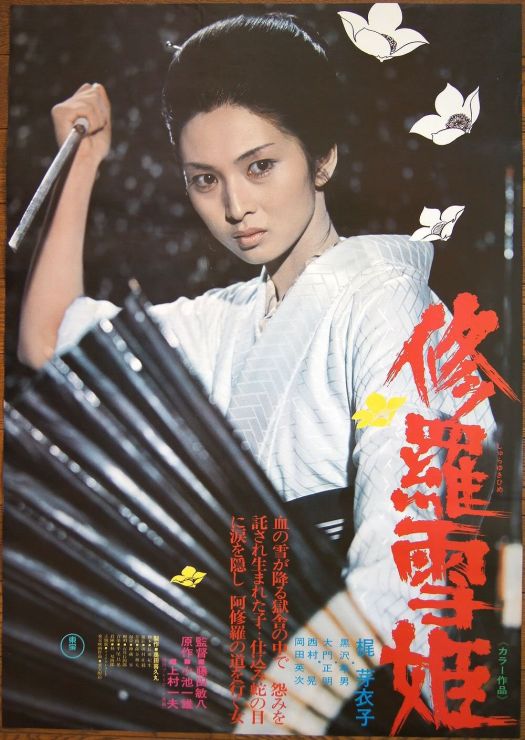 I’ll be the first to admit I don’t know a whole hell of a lot about Japanese manga. But I do know a little something about movies, and 1973’s LADY SNOWBLOOD was a revelation for me, a game changer that has me yearning for more! As I sat watching, enthralled by the imagery, I couldn’t help but feel I’d seen LADY SNOWBLOOD before, and I had: Quentin Tarantino “borrowed” (some would say stole!) much of the plotline for his KILL BILL films, with some scenes practically lifted verbatim! 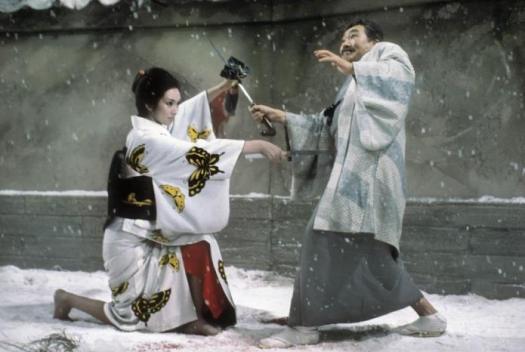 Much as I loved KILL BILL VOLS. 1 and 2, I found LADY SNOWBLOOD to be even more entertaining. It’s non-linear plot is structured into chapters (sound familiar, Tarantino buffs?), and the dazzling camerawork and bold, vivid color schemes kept me glued to the screen. A prisoner named Sayo gives birth to a child on a cold winter’s night. The child, Yuki, is to be used as an instrument of vengeance on the three men and one woman responsible for the rape and torture of Sayo and the brutal murder of Yuki’s father and brother. Yuki is trained in the art of swordfighting by stern taskmaster Dokai, rechristened Lady Snowblood, and sent to be an Avenging Angel of Death against those who destroyed her family…

This sets the stage for some stunningly beautiful visuals, co-mingled with plenty of violence and blood-spurting gore. It is a truly amazing, unforgettable  film, and much of the credit goes to director Toshiya Fujita and cinematographer Masaki Tamuro. There’s much artistry blended in among all the mayhem and carnage: the scene at the cliffs where Yuki confronts Banzo Takamura, for example, is haunting, and the finale at the masquerade ball turns into a deadly danse macabre when Yuki takes on her greatest foe, Gishiro Tsukamoro. The unexpected ending will leave you in shock and awe.

Much of the cast will be unfamiliar to western viewers. Meiko Kaji, a star in Japan, is fantastic as Yuki/Lady Snowblood, with her umbrella/samauri sword, red-rimmed eyes, and (purposely) unemotional attitude. Kaji starred in a series of girl biker gang films called the Stray Cat (or Alleycat) Series… I intend on seeing them soon! Ko Nishimura (Dokai) appeared in Kurasawa’s THE BAD SLEEP WELL and YOJIMBO, while Eiji Okada (Tsukamoro) is recognizable from HIROSHIMA, MON AMOUR, THE UGLY AMERICAN,  and the sci-fi kaiju eiga movie THE X FROM OUTER SPACE. Familiar Faces or not, the cast will completely spellbind you.

It’s difficult to convey with mere words what a brilliant achievement LADY SNOWBLLOD is; I can’t seem to find enough superlatives. The film has to be seen to be appreciated, a visual assault on the senses that left me breathless… even with subtitles! Quentin Tarantino came close, and I really do admire his work, but LADY SNOWBLOOD is a movie that deserves a much larger audience. It’s an original (dare I say it?) masterpiece, an incredible cinematic experience, and one you should definitely not miss!