There’s a lot of good stuff being broadcast this month, so it’s time once again to make some room on the ol’ DVR. Here’s a quartet of capsule reviews of films made in that mad, mad decade, the 1960’s:

THE FASTEST GUITAR ALIVE (MGM 1967; D: Michael D. Moore) –  MGM tried to make another Elvis out of rock legend Roy Orbison in this Sam Katzman-produced comedy-western. It didn’t work; though Roy possessed one of the greatest voices in rock’n’roll, he couldn’t act worth a lick. Roy (without his trademark shades!) and partner Sammy Jackson (TV’s NO TIME FOR SERGEANTS) peddle ‘Dr. Ludwig Long’s Magic Elixir’ in a travelling medicine show, but are really Confederate spies out to steal gold from the San Francisco mint to fund “the cause” in the waning days of the Civil War. The film’s full of anachronisms and the ‘comical Indians’ aren’t all that funny, but at least Roy gets seven decent tunes to sing. Familiar Faces Lyle Bettger, Iron Eyes Cody, John Doucette , Joan Freeman, and Douglas Kennedy try to help, but the story kind of just limps along. Worthwhile if you’re an Orbison fan, otherwise a waste of time. Fun Fact: Roy’s MGM Records label mate Sam the Sham (of “Wooly Bully” fame) has a small part as a guard at the mint. 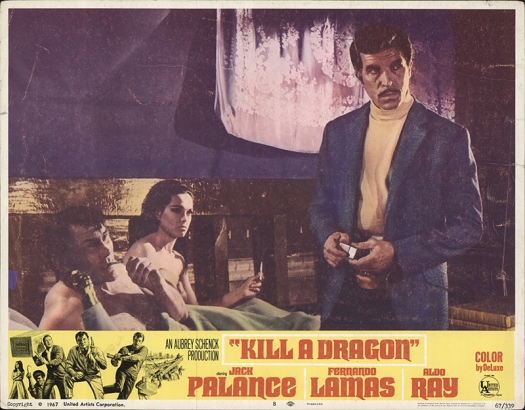 KILL A DRAGON (United Artists 1967; D: Michael D. Moore) – Minor action yarn with ruthless Fernando Lamas out to hijack a load of nitroglycerine washed upon a small Japanese island, and the villagers hiring soldier-of-fortune Jack Palance to protect them and their bounty. Palance gives an engaging, tongue-in-cheek performance, Lamas makes an evil adversary, and Aldo Ray is among Jack’s mercenary crew… seeing Aldo in drag is something you won’t wanna miss!! Nothing special, but an adequate time filler for action fans. Fun Fact: Director Moore (who also helmed FASTEST GUITAR) was a former silent film child star (his first film was 1919’s THE UNPAINTED WOMAN, directed by Tod Browning ) who began working behind the scenes in the 1940’s. He became one of Hollywood’s highest regarded Assistant and Second Unit directors, and worked on films ranging from THE TEN COMMANDMENTS to GUNFIGHT AT THE O.K. CORRAL, KING CREOLE, BUTCH CASSIDY & THE SUNDANCE KID, PATTON, EMPEROR OF THE NORTH, THE MAN WHO WOULD BE KING, RAIDERS OF THE LOST ARK (and it’s two subsequent sequels), and NEVER SAY NEVER AGAIN. His last was 2000’s 102 DALMATIONS before retirement; Moore passed away at age 98 in 2013. His contributions to Hollywood movies may be unsung, but for people like Cecil B. DeMille and Steven Spielberg, Michael “Mickey” Moore was the go-to guy for action scenes. Job well done, Mr. Moore! 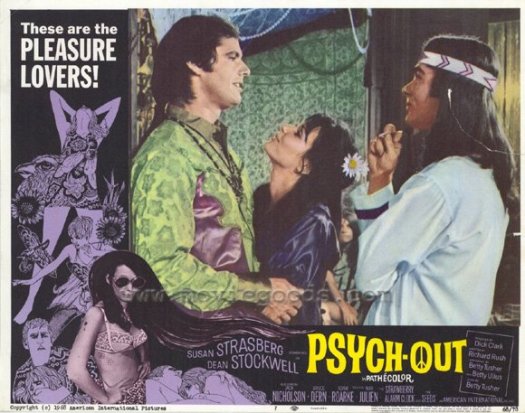 THE BIG CUBE (Warner Brothers 1969; D: Tito Davison) – Glamorous Lana Turner plays a glamorous stage actress who marries rich Dan O’Herlihy against the wishes of his daughter Karin Mossberg. Dad drowns in a yachting accident, and daughter conspires with LSD-making gigolo George Chakiris to drive Lana mad by slipping acid in her sleeping pills! This awful attempt at mixing Lana’s Ross Hunter-era soap operas with 60’s “youth culture” features bad acting, a putrid script, heavy-handed direction, and is a total mess all around. Even the presence of Lana, O’Herlihy, Chakiris, and Richard Egan couldn’t stop this movie from stinking up my living room! No redeeming qualities whatsoever (except the fact that the wooden Miss Mossberg was never heard from again!) Fun Fact: As I sat watching this bomb, slack-jawed and shaking my head, I kept muttering to myself, “This is bad. Just… bad”. The film’s worse than a bad acid trip, but I stuck with it for this review. You have other options. Don’t say I didn’t warn you!!

I hate to leave you on such a sour note, so here’s Roy Orbison doing “Pistolero” from Mickey Moore’s FASTEST GUITAR ALIVE! Take it away, Roy:

11 Replies to “Cleaning Out the DVR #18: Remember Those Fabulous Sixties?”