It’s wild! It’s weird! It’s Cecil B. DeMille’s  MADAM SATAN, a movie I’ve heard about for decades, but never had the chance to catch, until now. It’s got a little something for everybody, from drama to comedy to musical numbers to half-naked women to jazz baby Lillian Roth! Was it worth the wait, Dear Readers? Well… read on! 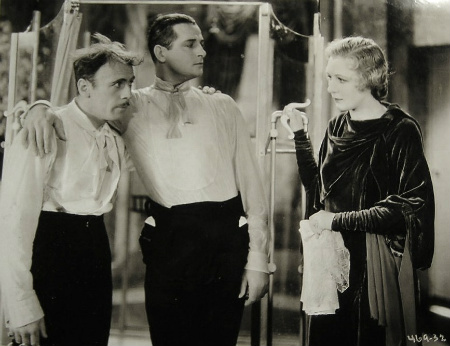 Better hold on to your seats though, as MADAM SATAN shifts abruptly in tone throughout it’s running time. It’s slow going the first few minutes, starting out as a stiff drawing-room drama. Angela Brooks (Kay Johnson) is worried about her dissipating  marriage to Bob, who neglects her and stays out all night. Now here comes comedy, with Bob (Reginald Denny ) and his pal Jimmy (Roland Young) trying to sneak in at dawn, two wasted wastrels drunk as the proverbial skunks. Suddenly, out of nowhere, the maid (Elsa Peterson) breaks out into song! No wonder Angela decides to leave Bob, with all this chaos going on!

Angela follows Jimmy to the flat of the saucy Trixie (Lillian Roth), with whom Bob has been dallying. Jimmy tries to cover by saying Trixie’s his new wife, but Angela’s not buying it, and asks to spend the night. Things being what they are, we get a comedy of errors as Jimmy and Trixie are forced to stay in the bedroom together, then Bob comes in, and more chaos ensues! Now things really get weird, as Jimmy throws a masquerade party aboard a zeppelin (yes, I said a zeppelin!), which begins with a dance number that’s a cross between Busby Berkeley and Kenneth Strickfaden!

There’s a contest to decide the Queen of the Ball which Trixie, decked out as a Golden Pheasant, is determined to win, when suddenly, the mysterious Madam Satan shows up, a masked Angela dressed like a demonic superheroine! Angela seduces the unsuspecting Bob away from Trixie, and the two retire to the chart room for a sizzling tete’a’tete, when… Good Lord, a raging storm causes lightning to strike the zeppelin, and we shift yet again to a proto-distaster movie as the panicked revelers have to parachute to safety or face certain doom!

To call this movie bizarre is an understatement, but somehow DeMille manages to make it all work. I’m not really doing it justice trying to describe all that’s going on here; it’s one of those films you have to see for yourself to believe! Since it was made in the Pre-Code Era, there’s a lot of risqué business, though DeMille was told to tone it down a notch or two, especially with the masquerade party costumes. But there are more than enough eye-popping moments to make the viewer think, “How did they get away with THAT in 1930?!?”.

Kay Johnson as Angela/Madam Satan does a fine job walking the tightrope between the two different characters. I watched another film featuring Miss Johnson the same night, the forgotten horror THIRTEEN WOMEN (coming soon to this blog!), sort of a mini-Kay Johnson film festival (Kay was the wife of director John Cromwell , and  mother of actor James Cromwell ). Reginald Denny (Bob) was a silent star who made the successful transition to early talkies, and had a long career as a character actor. 19-year-old Lillian Roth (Trixie) was already a show biz veteran and is a little firecracker; her life story was filmed in 1955 as I’LL CRY TOMORROW starring Susan Hayward. But it’s Roland Young as Jimmy who stole the show for me. Young’s droll sense of humor and way with a line are priceless! He’s fondly remembered by most film buffs as the title character in TOPPER and it’s two sequels.

So, was MADAM SATAN worth the wait? I’d say yes; even though those shifts in tone can be jarring at times, and it’s a bit creaky in places, the movie was  entertaining enough to hold my interest. And it’s certainly historically significant, being DeMille’s only stab at a musical, even though it’s not really a musical, it’s more of a comedy… or drama… or disaster flick… oh, never mind, just watch for yourselves and you figure it out!