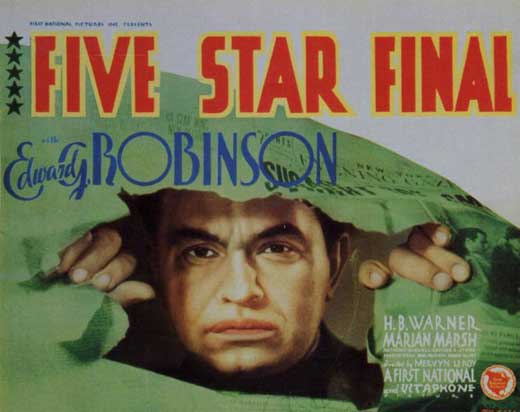 Tabloid journalism has been around far longer than the cable “news” channels of today, with their 24 hour a day barrage of nonstop sleazy scandals and “fake news”. A circulation war between publishers Joseph Pulitzer (New York World) and William Randolph Hearst (New York Journal) in the 1890’s, filled with sensationalized headlines and mucho muckraking, gave birth to the term “Yellow Journalism”, derived from Richard Outcault’s guttersnipe character The Yellow Kid in his comic strip Hogan’s Alley, which appeared in both papers. This legacy of dirt-digging and gossip-mongering continued through the decades in supermarket rags like The National Enquirer and World Weekly News, leading us to where we are today with the so-called “mainstream media” stretching credibility to the max and bogus Internet click-bait sites abounding. All of which leads me to FIVE STAR FINAL, a Pre-Code drama about headhunting for headlines starring Edward G. Robinson and a colorful supporting cast. 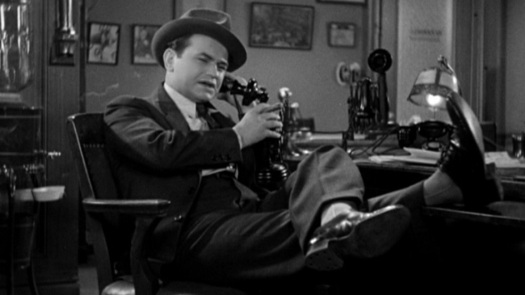 Robinson and director Mervyn LeRoy , fresh off the hit gangster epic LITTLE CAESAR, reunited for this sordid little tale as E.G. plays Randall, managing editor of the fictional New York Gazette, pressured by his publisher to boost sagging sales by jazzing things up with girlie pics and juicy scandals. Rehashing the twenty year old Nancy Voorhees murder case, in which a young secretary shot and killed her boss/lover, Randall assembles his team to dig up everything they can on her life today. Staff floozie Kitty Carmody hunts down her whereabouts; Nancy is now Mrs. Michael Townsend, whose daughter Jenny is about to be wed to wealthy manufacturing heir Phillip Weeks.

Isopod, an ex-divinity student ejected for drinking and lasciviousness, impersonates a reverend and visits the Townsends, learning the couple is afraid all this bad publicity will harm Jenny, who was born out-of-wedlock and isn’t Michael’s child. A drunken Isopod brings the scoop back to Randall and the smear campaign is on! A distraught Nancy ends up committing suicide; when Michael finds the body he follows suit. Kitty and her photographer sneak into the Townsend’s apartment and take a pic of the two bodies on their bathroom floor. The scandal causes the upper crust Weeks’s to demand the wedding be called off, and a hysterical Jenny grabs a gun and confronts Randall, Isopod, and publisher Hinchcliffe in an amazingly tense dramatic scene, concluding with Randall telling Hinchcliffe just what he can do with his bloody paper! 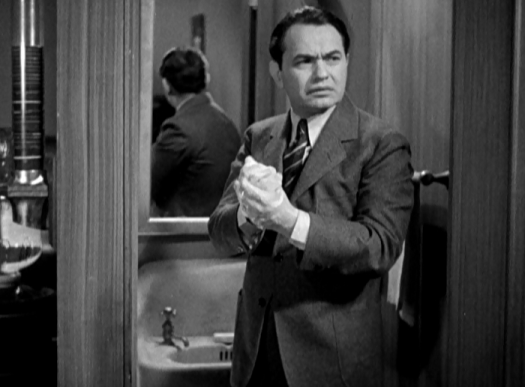 Robinson’s staccato line delivery and perpetual scowl make Randall seem as real a newspaper man as you can get. Reluctant at first to sensationalize his paper, he dives right into the mudpit to deliver the goods. His forlorn face when he learns of the tragedy is unforgettable, and his compulsive hand washing throughout the movie suggests a man who can never get all the filth off of them. The fact that Robinson, who gave brilliant performances in films like DR. EHRLICH’S MAGIC BULLET, DOUBLE INDEMNITY, THE WOMAN IN THE WINDOW, SCARLET STREET , KEY LARGO , and so many others, never won an Oscar, only awarded a posthumous statuette two months after his death, is another black eye on the Academy.

A pre-FRANKENSTEIN Boris Karloff plays the unctuous reporter Isopod, a leering slimebag of a man just as creepy as any monster or mad doctor he ever played… maybe creepier! Ona Munson (GONE WITH THE WIND’s Belle Watling) is Kitty, the girl who’s “been around”, George E. Stone (E.G.’s LITTLE CAESAR henchman) is Ziggie, a street hardened “idea man”, and Aline MacMahon makes her film debut as Randall’s secretary Miss Taylor, who’s secretly in love with her boss. Marian Marsh as Jenny is cloying at first, but heats things up when she becomes unhinged at the end. Veterans H.B. Warner and Frances Starr as Michael and Nancy are okay, but Anthony Bushell is rah-ther wooden as Phillip. Familiar Faces include Oscar Apfel, Gladys Lloyd (Mrs. Edward G. Robinson), and the hypnotic Polly Walters as an uncredited switchboard operator. 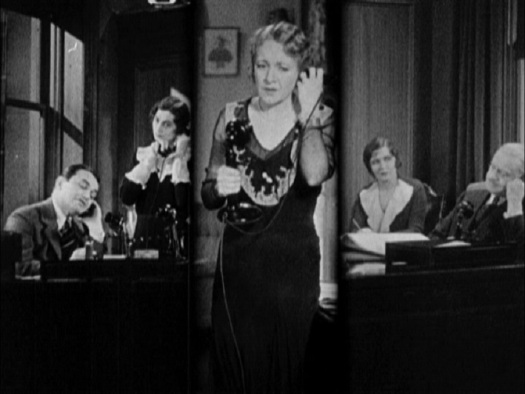 One innovative scene I found fascinating was a triple-split screen with Nancy frantically trying to call Randall and Hinchcliffe, leading to her death. Le Roy moves his camera to good effect; the film is rarely static, yet LeRoy’s work as director seems to get overlooked in conversations among film buffs today. FIVE STAR FINAL is admittedly creaky in some spots, but overall holds up well, and is as relevant in today’s world as it was 87 years ago. The more things change, the more they remain the same… and more’s the pity.