American-International Pictures, never ones to shy away from jumping on a trend, released a pair of secret agent spoofs starring the one and only Vincent Price as the evil supervillain Dr. Goldfoot. AIP president James H. Nicholson himself allegedly came up with the story, wanting to use the film as a showcase for wife Susan Hart, a beautiful woman of limited talent. The first was DR. GOLDFOOT AND THE BIKINI MACHINE, an endearingly goofy little movie co-starring SKI PARTY’s Frankie Avalon and Dwayne Hickman. The two even use the same character names from that previous film, Tod Armstrong and Craig Gamble – only reversed, with Frankie as Craig and Dwayne as Tod! 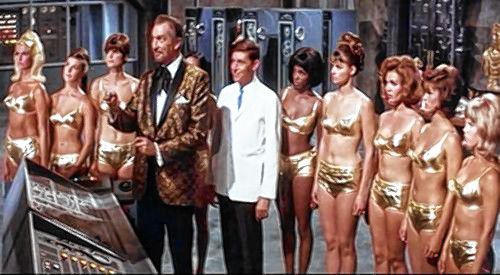 Mad scientist Goldfoot, an obvious cross between James Bond nemeses Dr. No and Goldfinger, is Price at his campy best, carving up large slices of ham as the malevolent meanie. His fiendish plot is creating an army of indestructible female robots in gold bikinis to entice the world’s richest men, then having the alluring  androids steal all their money. Into this scenario comes Craig (Avalon), an inept secret agent working for SIC (Secret Intelligence Command), who is accidentally targeted by Hart’s sexy cyborg Diane. Craig goes ga-ga over Diane, and when Goldfoot recalls her to get at filthy rich Tod (Hickman), he desperately searches for his artificial object of desire.

The movie’s so corny, full of wheezy jokes and slapstick sight gags you can see coming a mile away,  you can’t help but laugh. That’s because the screenplay’s courtesy of Three Stooges/Bowery Boys veteran Elwood Ullman, who did a rewrite of Robert Kaufman’s original script. Besides the spy spoof angle, the film lampoons Price’s Edgar Allen Poe films with portraits of Goldfoot’s ancestors resembling Price’s characters (Roderick Usher, Verdon Fell) and a scene with Hickman strapped under a swinging blade that uses stock footage from THE PIT AND THE PENDULUM! 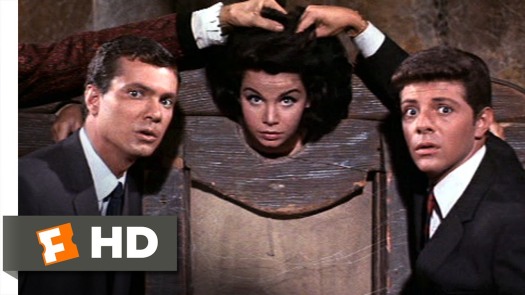 Fred Clark plays the SIC chief, who is also Craig’s uncle, which explains how the nebbish got the job. TV actor Jack Mullaney (THE ANN SOUTHERN SHOW, IT’S ABOUT TIME) is Goldfoot’s bumbling assistant Igor, and among the fembots you’ll find 60’s starlets Marianne Gaba, Luree Holmes, Deanna Lund (LAND OF THE GIANTS), Pamela Rodgers (LAUGH-IN), and Salli Sachse. There are cameos from ‘Beach Party’ vets Aron Kincaid, Harvey Lembeck (as Eric Von Zipper!), Alberta Nelson, Deborah Walley, and a certain ex-Mousketeer pictured above. Norman Taurog, who won an Oscar for 1930’s SKIPPY and became a comedy specialist, handles the direction, such as it is. 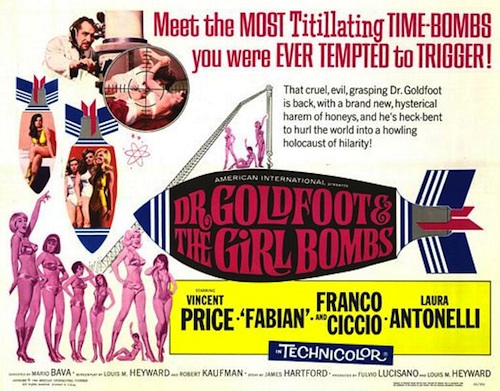 The next entry, 1966’s DR. GOLDFOOT AND THE GIRL BOMBS, was directed by… Mario Bava ?!? That’s right, the Italian horror/giallo maestro took over the reigns on this Italian coproduction, mainly because he was under contract to producer Fulvio Lucisano at the time. Bava reportedly hated the film, and I for one don’t blame him… although the first was a good-natured romp, GIRL BOMBS is, well, a bomb!

Price is back as the dastardly doctor, this time churning out killer robots who explode when kissing. He looses them on the generals of NATO gathered for war maneuvers, with the evil intent of dropping the H-Bomb on Moscow, pitting the Ruskies against the good ol’ USA in hopes the two superpowers with destroy each other, then he can split the world with his allies Red China! Price constantly breaks the Forth Wall, giving the audience plot exposition, and some silly asides. Reportedly, Vinnie didn’t like the sequel either, but at least he got a nice Italian vacation for his troubles!

SIC is still out to stop Goldfoot, only instead of Frankie Avalon we get another ex-teen idol, Fabian, who’s just as inept and a real “Hound Dog Man” with SIC secretary Laura Antonelli (VENUS IN FURS, A MAN CALLED SLEDGE). We also get the unfunny Franco and Ciccio, the world’s worst comedy team, who annoy the crap out of me. These two paisans don’t translate well into American humor (the bad dubbing doesn’t help), though they were hugely popular in Italy. To me, they just suck.

The “hilarious” ending consists of a chase through a kiddie amusement park, a runaway hot air balloon, and… *sigh* why am I wasting words? Sorry, folks, but it’s just not worth it. The first Dr. Goldfoot movie has a silly if sophomoric vibe, spoofing the James Bond craze, teen flicks, and pretty much American-International itself. The sequel is only for masochists and/or Price completists; otherwise avoid it at all costs!