In the wake of 1967’s THE DRITY DOZEN came a plethora of all-star, similarly themed films. THE DEVIL’S BRIGADE is one of those, though just a bit different: it’s based on the true-life exploits of the First Special Service Force, a collection of American misfits straight from the stockades and the crack, highly disciplined Canadian military, forging them into one cohesive fighting unit.

William Holden  heads the cast as Lt. Col. Robert Frederick, tasked with putting the units together. His seconds-in-command are the cigar chomping American Major Brecker (Vince Edwards) and proud Canadian Major Crown (Cliff Robertson). The Americans, as rowdy a bunch of reprobates as there ever was, include Claude Akins , Luke Askew, Richard Jaeckel, and Tom Troupe, while the Canadians are represented by the likes of Richard Dawson, Jeremy Slate, and Jack Watson , war movie vets all.  Andrew Prine is also aboard as an AWOL soldier looking for a chance to see combat. 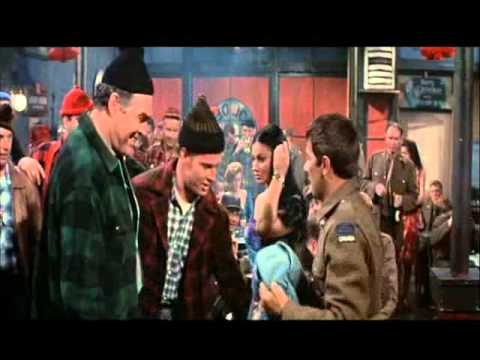 There’s plenty of conflict at first between the uncouth Americans and their regimented Canadian counterparts, but they’re soon resolved in the obligatory barroom brawl scene with some townsfolk that include NFL star Paul Hornung (Green Bay Packers) as a local lumberjack and ex-middleweight champ Gene Fullmer as a bartender. The men are now acting as one, but the powers-that-be decided to disband the unit, prompting Frederick to head to Washington and argue his case before Guest Stars Michael Rennie (as Gen. Mark Clark) and Dana Andrews (Brig. Gen. Naylor). They’re given a chance to prove themselves in Italy, and capture  an entire town away from the Germans on their own, despite the protests of Commanding Officer Carroll O’Connor .

The Devil’s Brigade, as the Nazis have dubbed them, are rewarded with a dangerous mission to scale a rugged, rocky hill and take out a German artillery stronghold. Many of the all-stars die heroically before the mission is accomplished, and the Allied forces are now able to march into North Italy. Action veteran  Andrew V. McLaglen directs competently, and stunt coordinator Hal Needham keeps things moving, yet it feels like we’ve seen this movie before, different characters maybe, but same results, and at 130 minutes is way overlong. It’s not a bad film, it just suffers from same old formula syndrome.

The real First Special Service Force were an elite commando unit who first saw action in the Aleutian Islands, then were sent by Gen. Clark to Naples, where they served with dignity and honor. Following their bloody success (91 dead, 313 wounded), they were sent to Anzio where they stormed the beach and fought behind enemy lines, and later to the South of France during Operation Dragoon, with major victories (12,000 German casualties, 7,000 Nazi prisoners). The Force was disbanded in December 1944 with full honors, their mission accomplished and their efforts helping to speed the war’s end. Let’s not forget this Memorial Day not all those who fought and died for freedom were American, and remember our brave Canadian allies of the First Special Service Force.