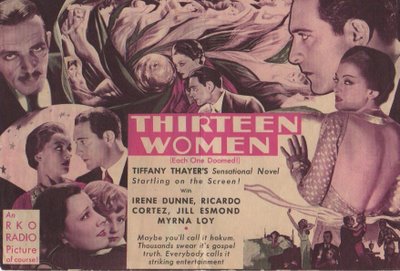 I pride myself on having seem almost every horror film made during the 1930’s, though once in a while an obscure title comes along whose attention has escaped me. But how on Earth did I miss THIRTEEN WOMEN, especially with a cast headlined by Irene Dunne (of all people!) and Myrna Loy ? This fast-paced thriller involving hypnosis, astrology, and serial murder is downright nasty, and has been cited as a precursor to the “slasher” genre… not to mention a whole lot of fun! 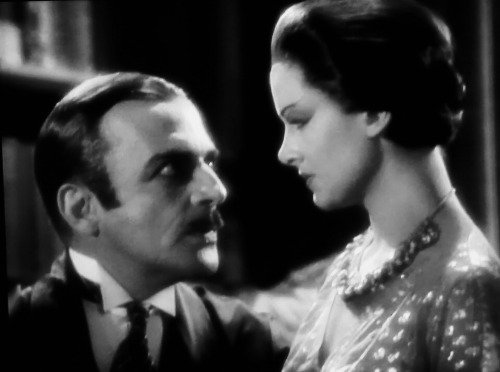 We begin with circus performer June Raskob receiving a letter from the mysterious Swami Yogadashi with her horoscope attached, predicting impending doom in the stars for her. But it’s her sister who dies, plunging to her death during their trapeze act (shown in gruesome detail), and poor June goes hopelessly insane. The scene shifts to exotic half-caste Ursula Georgi, who has the Swami under her hypnotic spell and uses him as a pawn in her game to get revenge on her St. Alban’s sorority sisters who ostracized her because of her race. Lovely Hazel Clay is next: she stabs her hubby to death with a butcher knife and is given the chair! 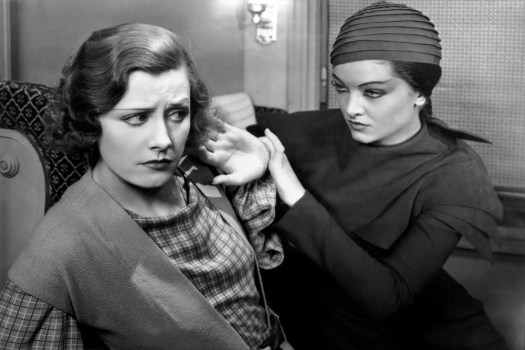 Skeptical Laura Stanhope gathers the remaining girls to calm them down, but when the Swami’s prediction of his own demise comes to pass (under Ursula’s dark influence) and schoolmate Helen Frye commits suicide aboard a train, even Laura comes to believe – she’s recently received her own letter warning “something dreadful” is about to happen to her young son Bobby. Police Sgt. Clive, investigating Helen’s death, finds Laura’s address on Helen’s baggage, and begins to dig up the facts. Then the unthinkable: Bobby gets a package of candy in the mail, and worried Laura has it analyzed at police headquarters. The verdict: poison! When that fails, chauffeur Burns (also under Ursula’s power) buys the tyke a bouncy ball for his birthday, an explosive bouncy ball! This all culminates in a train ride to hell, where Laura is confronted by Ursula, with Clive and his men in hot pursuit, and the ultimate end of the she-devil  exactly the way Swami Yogadachi predicted she would die. 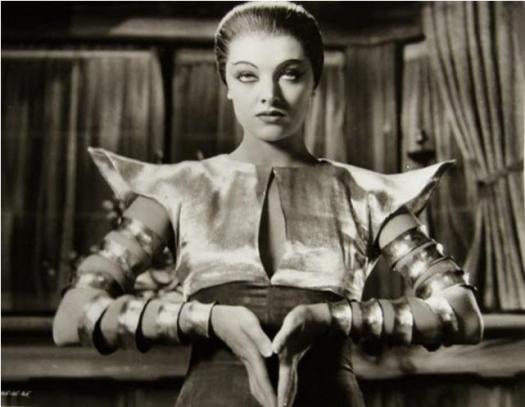 Myrna Loy was specializing in exotic roles at this juncture in her career, and her evil-eyed Ursula is one of her scariest – though I can’t blame her for the way she was treated because of racism among the other girls, cold-blooded murder isn’t the best way to make things right! Irene Dunne was already a star for films like CIMARRON and BACK STREET, and she makes a good woman-in-peril here, suave Ricardo Cortez pours on his usual charm as Clive, and the cast is made up of Familiar Faces like Florence Eldridge, Jill Esmond, C. Henry Gordon (The Swami), Kay Johnson , and Edward Pawley.

This was the only screen appearance of Peg Entwistle, in the small role of murderess Hazel. Miss Entwistle is better known for her tragic death than her acting: in 1932, she climbed to the top of the Hollywood sign, and jumped from the letter H, a suicide at age 24. Her death was played up all in the papers and scandalized the film community, later rehashed in Kenneth Anger’s book HOLLYWOOD BABYLON, along with a topless pic of the late actress (which I refuse to reproduce here, not because I’m prudish, but I feel it exploits a tragic situation). 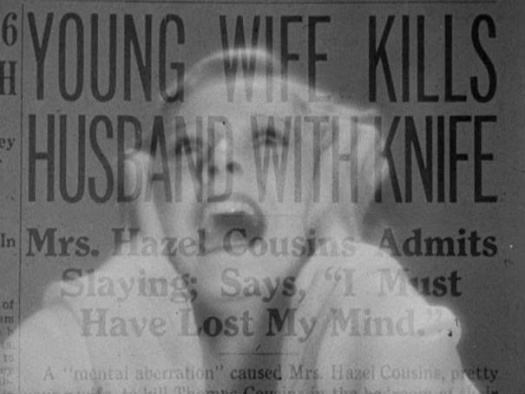 THIRTEEN WOMEN draws from elements of the murder mystery, psychological thriller, and occult practices to create a horror movie begging to be rediscovered. Myrna Loy is a sultry villainess, and director George Archainbaud uses some neat camera tricks, like an animated star after some of the deaths to segue into the next scene.  If you’re a horror buff like me, you’ll definitely want to seek out this forgotten gem.