TV Cop Shows ran rampant during the 1980’s. There were gritty street cops, female cops, Dirty Harry-inspired cops, MTV cops, debonair cops, teenage cops, and every other permutation you could think of, short of outer space cops. But for Cops With The Best Hair, it has to be… no, not CHARLIE’S ANGELS, but TJ HOOKER!

TJ HOOKER starred William Shatner (which kind of makes this a semi-outer space cop show, no?) as Hooker, a veteran on the LCPD (standing in for Los Angeles) who serves as mentor to the younger cops. Shatner, who by this time was, shall we say, follically challenged, wore a perm-coiffed toupee which never got mussed no matter how many times he ran down bad guys, got in hellacious fights, or got it tousled by his latest love interest:

As Warren Zevon would say, “His hair was perfect”!

Zmed, the immortal star of GREASE 2, also went through the series without a single hair out-of-place, as did former teen idol James Darren, who joined the cast in season two as another veteran cop, Jim Corrigan:

Then there’s 80’s babe Heather Locklear as Stacy Sheridan, a rookie cop with long blonde locks who must’ve hired an army of stylists to keep up with the gelled and blow dried perfection of Shatner and company: 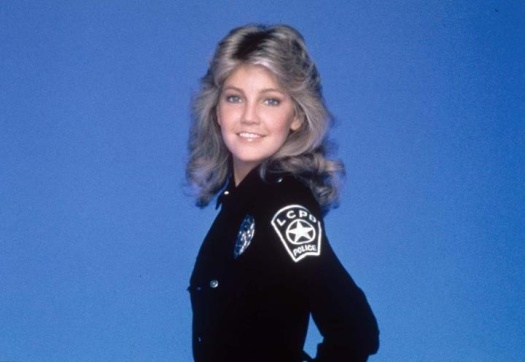 Even Richard Herd, who played LCPD Captain (and Stacy’s dad) Dennis Sheridan, had better hair than the usual police bosses of the era:

The show itself (which ran from 1982-86) is pretty cheezy, with plenty of cool 80’s background music (dig those synthesized drums!), sex and violence, and the brilliant emoting of Our Man Shatner! Plus, all that gorgeous 80’s hair! I occasionally catch TJ HOOKER weeknights at 10:00EST on the FETV (Family Entertainment) network (DirecTV Ch. 323). It’s the perfect way to end the day by shutting your mind off for an hour, indulging in a big hunk of 80’s cheese, and of course enjoying those Amazing Hair Helmets!

More ‘Confessions of a TV Addict’:

A Fan’s Appreciation of Adam West

The Marvel Super Heroes Have Arrived!

How TURN-ON Got Turned-Off

Aaron Ruben, Man Behind the Laughter

7 Replies to “Confessions of a TV Addict #7: TJ HOOKER and His Amazing Hair Helmet!”