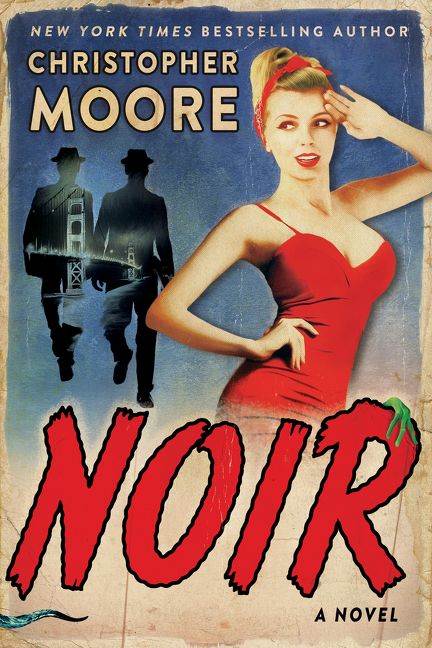 In between everything else I do, I read about a book a week, mainly mystery fiction. Current favorites include James Lee Burke, Lee Child, Michael Connelly, Janet Evanovich, and John Sandford, all with their own unique styles, and all masters of the genre. But when I need a good laugh, I pick up Christopher Moore. I first became aware of Moore’s work with his brilliant 2002 novel LAMB, OR THE GOSPEL ACCORDING TO BIFF, CHRIST’S CHILDHOOD PAL, an irreverent satire narrated by Jesus’s good buddy Biff that’s as outrageous as it sounds, and sinfully funny to boot.

This time around, Moore goes from taking on the Scriptures to the hard-boiled world of Raymond Chandler and Dashiell Hammett. The novel is set in 1947 San Francisco, a very good year for noir (OUT OF THE PAST, NIGHTMARE ALLEY , BORN TO KILL , LADY FROM SHANGHAI , and other seminal films noir were made that year), as we follow the adventures of Sammy “Two Toes” Tiffin, a down-on-his-luck bartender with a past  working in a seedy dive owned by a sleazy cheapskate. A femme fatale named Stilton (nicknamed “The Cheese”), a serviceman’s widow who can crack wise with the best of ’em, walks into the bar, and Sammy goes head over high heels for her. There’s plenty of intrigue involving an Air Force general who wants to procure some dames dressed like Dorothy in THE WIZARD OF OZ, a crooked cop who wants a piece of everyone’s action, the dark alleys of Chinatown where men drink snake piss to gain virility… oh, and a man from outer space! Told you Moore was unique!

Sammy narrates most of this outlandish stew, except for some chapters told by… well, I’m not gonna say, you’ll have to read it and find out yourselves. There are a ton of characters woven in and out of this funny tale, friends and foes alike of Sammy and The Cheese, and they’re all carefully crafted by the skillful Mr. Moore. Parts of NOIR are laugh-out-loud hysterical, parts drew a chuckle, but all of it kept me smiling throughout the brisk 330 pages (not to mention the Afterword and the special section in the Barnes & Noble edition, an essay by Moore titled “Tough Guy Talk”). Christopher Moore is a satirist worth reading, and NOIR ranks among his best, which means its real damn good. Perfect for beach reading, or those rainy nights when it’s Three AM and you’re down to your last bourbon. Pick up a copy today and discover the wacky world of NOIR and Christopher Moore!