I discussed filmmaker Vernon Zimmerman in a post on his UNHOLY ROLLERS back in January. Zimmerman wrote the script (but did not direct) for 1976’s BOBBIE JO & THE OUTLAW, which on the surface is just another sex’n’violence laden redneck exploitation film. Yet after a recent viewing, it seemed to me Zimmerman was not just delving into exploitation, but exploring something more: disaffected youth, gun culture, the cult of personality, and violence in America, themes that still resonate today. 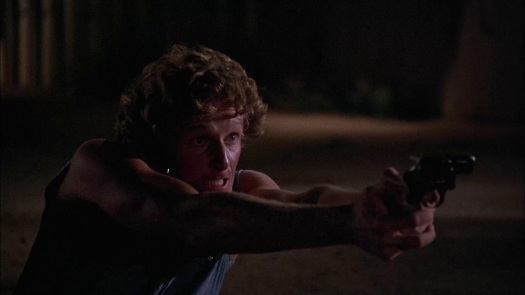 Former child evangelist turned rock star turned actor Marjoe Gortner is Lyle Wheeler, a drifter who enters quick draw contests and idolizes Billy the Kid. Lyle’s a hustler, as we find out as he pulls into a gas station and steals a Mustang from a travelling salesman. Lyle outruns a police car hot on his tail, causing the cop to go off the road, and revs into the next town, where he meets Bobbie Jo.

She’s played by Lynda Carter, a small town carhop with big dreams of country music success. Bobbie Jo has a mother (B Western vet Peggy Stewart) who nags and drinks on the sly, and a sister Pearl (Merrie Lynn Ross) who left home to be a stripper. She doesn’t date the local boys, who quite frankly are just lusting after her big boobs, but when outsider Lyle shows up, the two find an immediate attraction and hook up.

The young lovers, along with Bobbie Jo’s hippie pal Essie (Belinda Balaski), hit the road for a series of adventures that includes trouble with some tough Mexicans at a bar and tripping on mushrooms in the mountains with an Indian shaman. They visit sister Pearl and her sleazy boyfriend Slick Callahan (Exploitation star Jesse Vint), who pulls a payroll robbery that ends when Lyle shoots and kills the guard. Now the quintet, like a modern-day Barrow gang, are hunted outlaws, and when scared Essie drops a dime to the sheriff, she’s killed in the crossfire of a deadly shootout. Lyle vows retribution by pulling off a bank robbery, leading to a crime and murder spree across New Mexico…. 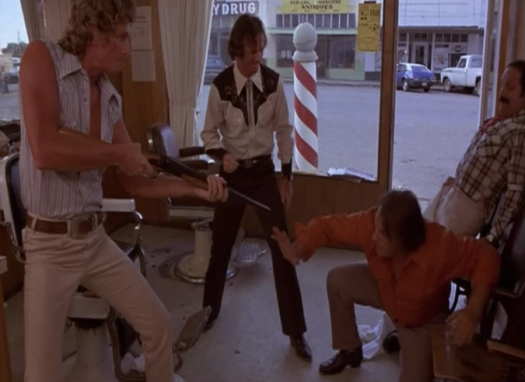 Zimmerman’s script transplants BONNIE & CLYDE to mid-70’s America and is peppered with cinematic allusions, including a doomed deputy named Abel Gance. He shows us the ennui of the character’s lives, all of whom are societal outcasts that together form their own version of the nuclear family unit. Mark L. Lester takes the director’s chair; he’s known for some interesting Exploitation films of his own (TRUCK STOP WOMEN, CLASS OF 1999, FIRESTARTER, COMMANDO, SHOWDOWN IN LITTLE TOKYO), as well as the notorious dud ROLLER BOOGIE. Two side notes: this was the first film for future director Chuck Russell (NIGHTMARE ON ELM STREET 3: DREAM WARRIORS, THE MASK, THE SCORPION KING), who worked on the film as Production Supervisor, 2nd Assistant Director, and appears as one of the deputies. Former Monogram/Allied Artists president Steve Broidy (who knew a thing or two about exploitation films) served as co-producer.

Marjoe Gortner, never the greatest of actors, does yeoman’s work as the delusional Lyle, and a pre-WONDER WOMAN Lynda Carter is fine indeed as Bobbie Jo.  The movie is famous for being the only time Lynda goes topless onscreen, but there’s much more to it than that. BOBBIE JO & THE OUTLAW may not rank as one of the 70’s best films, but I posit here it is certainly one of the most underrated. Am I reading too much into it? Should I just enjoy the violent joyride and the nubile charms of Lynda Carter? All movies are subjective; watch it and judge for yourselves, and see if you agree or disagree.