Warner Brothers pulled out all the stops for their 1940 epic THE SEA HAWK. There’s dashing Errol Flynn swashbuckling his way across the Silver Screen once again, the proverbial cast of thousands, high seas action, romance, political intrigue, superb special effects, and a spirited score by Erich Wolfgang Korngold. The only thing missing that could’ve possibly made this movie better is Technicolor, but since Jack and his bros had already spent $1.7 million (equivalent to almost thirty million today) to produce it, why quibble?

Flynn is in fine form as privateer Geoffrey Thorpe, captain of the pirate ship Albatross, in service to Her Majesty Queen Elizabeth I. When they attack and plunder a Spanish ship carrying Ambassador Don Alvarez de Cordoba and his beautiful niece Maria, Captain Thorpe is reprimanded and told to lay off the Spanish. Spain, however, is building up their Armada with world conquest in mind, and Don Alvarez has been sent to conspire with the traitorous Lord Wolfingham. Thorpe and his crew have a plan to attack the Spaniards on land in The New World where they’re looting Native gold to finance their plot for domination. The Queen tells him no officially, but off the record gives Thorpe the okay. This leads Thorpe and company into a trap, captured, and sentenced by Spain to life imprisonment as Spanish galley slaves.

Of course Thorpe, being Errol Flynn and all, hatches an escape plan, and he and his men take over the Spanish ship after learning the Armada is headed for England. The valiant Thorpe returns to the motherland and engages in a deadly swordfight with Wolfingham, an action scene that rivals Flynn’s duel to the death with Basil Rathbone in THE ADVENTURES OF ROBIN HOOD . Flynn is quite the handsome rogue in this one, although the kicker here is he’s shy around women! An in-joke, to be sure! Anyway, he wins the hand of the fair Maria before returning to sea and his swashbuckling ways.

Beautiful Brenda Marshall plays Maria, at first repelled by Flynn’s buccaneer ways but soon falling for him. Miss Marshall starred in some memorable films (CAPTAINS OF THE CLOUDS, THE CONSTANT NYMPH, BACKGROUND TO DANGER), but her screen career lasted a mere five years. She retired after becoming Mrs. William Holden. Claude Rains lends his villainous presence to the part of the unctuous Don Alvarez. His co-conspirator Lord Wolfingham is none other than Henry Daniell, one of the screen’s great villains (CAMILLE, JANE EYRE, THE BODY SNATCHER ). Daniell is noted for his appearances in three Sherlock Holmes films, including a turn as Professor Moriarty in THE WOMAN IN GREEN. Flora Robson interprets Queen Elizabeth I a bit differently than Bette Davis in THE PRIVATE LIVES OF ELIZABETH AND ESSEX (also starring Flynn); her speech at film’s end rallying her subjects to fight against the enemy is a not-so-subtle plea against German aggression in those days before U.S. involvement in World War II. 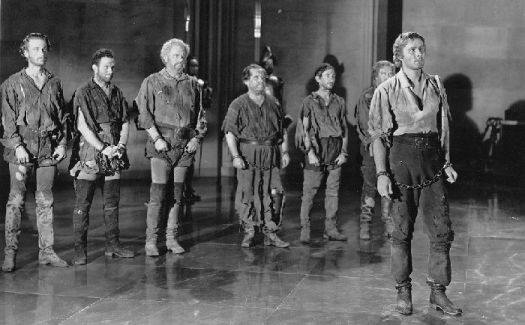 Master storyteller Michael Curtiz directs the film, his tenth and last with Flynn in five short years. Though the two weren’t exactly best buds (to put it mildly), their films together are among Hollywood’s finest. Korngold’s majestic score is certainly among the greats as well, adding to the pageantry and spectacle. Special effects were handled by Byron Haskin (later the director of WAR OF THE WORLDS) and Hans Koenekamp (THE BEAST WITH FIVE FINGERS ), and for 1940 they’re pretty damn good! Howard Koch and Seaton Miller wrote the screenplay, and knew just when to insert some comedy or heat up the action. I’d love to see THE SEA HAWK on the big screen, as it was meant to be seen, but if I have to settle for the comfort of my living room, I’m okay with that, too. It’s one of the grandest of entertainments produced during Hollywood’s Golden Age, and one you definitely need to keep an eye out for!

9 Replies to “On Her Majesty’s Secret Service: Errol Flynn in THE SEA HAWK (Warner Brothers 1940)”