Welcome back to Drive-In Saturday Night! Summer’s here, and the time is right for a double dose of American-International teen flicks, so pull in, pull up a speaker to hang on your car window, and enjoy our first feature, 1964’s BIKINI BEACH, starring Frankie Avalon and Annette Funicello: 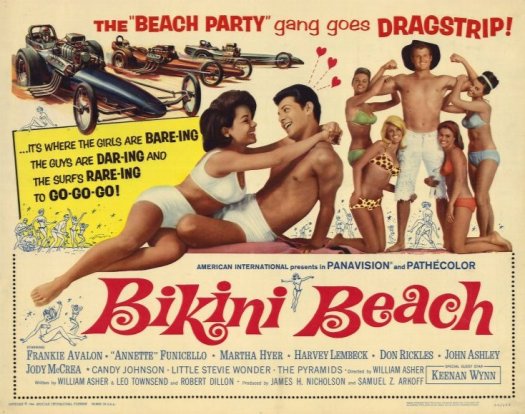 BIKINI BEACH is the third of AIP’s ‘Beach Party’ movies, and this one’s a typical hodgepodge of music, comedy, and the usual teenage shenanigans. The gang’s all here, heading to the beach on spring break for surfing and swinging. This time around, there’s a newcomer on the sand, British rock star The Potato Bug, with Frankie playing a dual role. Potato Bug is an obvious spoof of the big Beatlemania fever sweeping the country, with all the beach chicks (or “birds”, as he calls ’em) screaming whenever PB starts singing one of his songs, complete with Lennon/McCartney-esque “Wooos” and “Yeah, yeah, yeahs”. Avalon has a good time in a wig and Granny glasses (and a Terry-Thomas like accent) poking fun at the latest teen fad, and in typical low-budget AIP fashion, scenes with Frankie and Mr. Bug together have Beach regular Ronnie Dayton doubling for Potato Bug.

The villain of the piece is Keenan Wynn as Harvey Huntington Honeywagon III, who wants to get rid of the surfers so he can expand his old folks home. To prove his theory that the teens are nothing but Neanderthals “with an abnormal preoccupation with sex”, he has his simian sidekick Clyde (Janos Prohaska, The Bear from Andy Williams’s 60’s variety show) ape them by surfing, driving hot rods, and dancing. Martha Hyer is schoolteacher Vivien Clements, who stands up against Harvey for the kids, and guess who sides with him? That’s right, Eric Von Zipper (Harvey Lembeck ) and his Rats, who hates the surfers even more than Harvey!

Frankie and Annette argue (because of course they do), and she takes up with Potato Bug to make him jealous. Since Bug is a drag racing buff, Frankie decides to take up the sport and challenge him to a grudge race. Don Rickles Don Rickles returns as Big Drag (the former Jack Fanny), proprietor of Big Drag’s Pit Stop, the surfer’s hangout, and he’s funny as ever. There’s plenty of tunes and musical guests, including Little Stevie Wonder (singing “Dance and Shout”), The Pyramids, and The Exciters Band (who worked with the shimmying sensation Candy Johnson). There’s also plenty of padding, with lots of stock footage of surfing and racing, and though it’s an incredibly silly romp, it still manages to entertain if you like these sort of things (and I do!). Oh, and that mysterious art collector who keeps popping in and out of the film is none other than everyone’s favorite monster…

Boris Karloff  in a cameo! Now let’s go to the concession stand and load up on burgers and hot dogs during Intermission:

Our second feature is PAJAMA PARTY, also released in 1964: 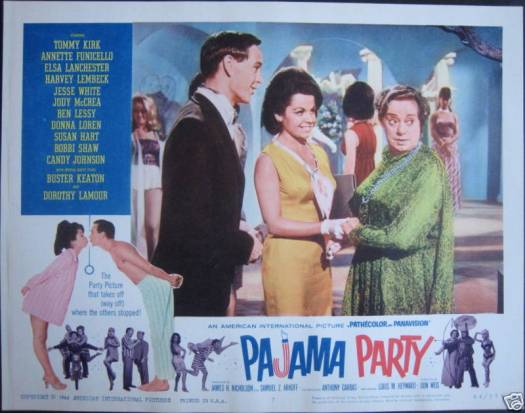 Considered by aficionados as the fourth in the series, besides the fact it shares Annette, Jody McCrea, Eric Von Zipper and his Rats, and other regulars (Luree Holmes, Candy Johnson, Donna Loren, Michael Nader, Ronnie Rondell, Salli Sachse), it bears no relationship to the usual ‘Beach Party’ movies. In fact, PAJAMA PARTY is even goofier than normal – if you can imagine – a surreal, almost plotless piece of escapism with self-knowing winks to the audience! It may not be ‘Beach Party’ canon, but the film knows it’s goofy and revels in it.

Martians (yes, Martians!) send their biggest goof-up, an outer space teen named Go-Go (Tommy Kirk ) to infiltrate Earth and pave the way for their upcoming invasion. Don Rickles plays a Martian on the spaceship, and it’s not a spoiler to reveal Frankie Avalon is the alien chief – you’ll recognize his voice instantly. Go-Go lands in the backyard of dotty Aunt Wendy (Elsa Lanchester ), who renames him George and introduces him to her teenage borders, including Connie (Annette) and her dumb jock boyfriend Big Lunk (Jody). Von Zipper and his Rats are around, out to get “them volleyball kids”, and a crook called J. Sinister Hulk (Jesse White) is plotting to steal Aunt Wendy’s millions, left to her by her late husband – in cash! All this takes place amid one slapstick situation after another, until whatever plot ends are neatly tied up. 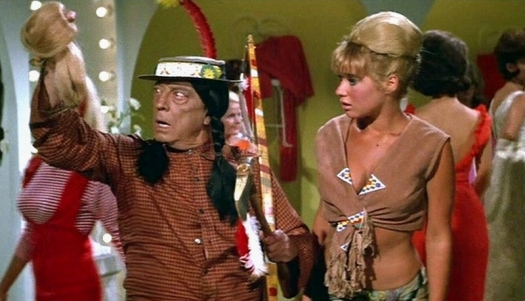 Among J. Sinister’s henchmen is Buster Keaton , making his first appearance in the series. The Great Stoneface has some funny gags and bits, and could still take a pratfall with the best of ’em! Also making her ‘Beach’ debut is Bobbi Shaw, the “ya, ya” girl, and actor and nightclub comic Ben Lessy rounds out the villainous quartet. Dorothy Lamour guest stars as hostess of a fashion show, and even gets a musical number, “Where Did I Go Wrong”. Sexy Susan Hart gyrates her way through the film without any dialog, which isn’t a bad thing; the wife of AIP co-founder James Nicholson was better at window dressing than acting. 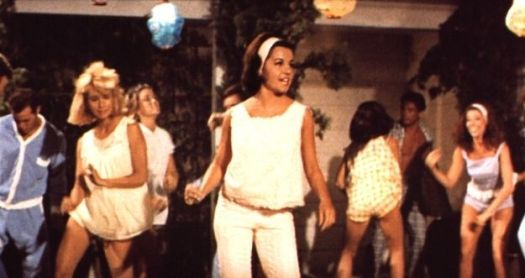 The songs are no great shakes except for Loren’s rocking “Among the Young” and Annette’s uptempo “Pajama Party”, but there’s some real energetic 60’s dancing going on (see if you can spot Teri Garr and Toni Basil movin’ and groovin’ in the crowd). The Nooney Rickets 4 provide a few instrumentals for the kids to boogie to, and the soft drink Dr. Pepper pops up everywhere (Loren was the Dr. Pepper Girl for years in 1960’s TV ads). Both BIKINI BEACH and PAJAMA PARTY are products of a bygone era, and both are still a lot of fun. A perfect double feature to watch on a hot summer night, with some popcorn and a cold Dr. Pepper!