Director Richard Lester made the jump from The Beatles to Broadway in filming A FUNNY THING HAPPENED ON THE WAY TO THE FORUM, but it wasn’t that far a leap. In adapting the Tony-winning musical comedy to the screen, Lester energizes the film with his unmistakably 60’s cinematic style, resulting in one of the decade’s best comedies, aided and abetted by a cast of pros including Zero Mostel , Phil Silvers, Jack Gilford, and the great Buster Keaton in his final film performance. 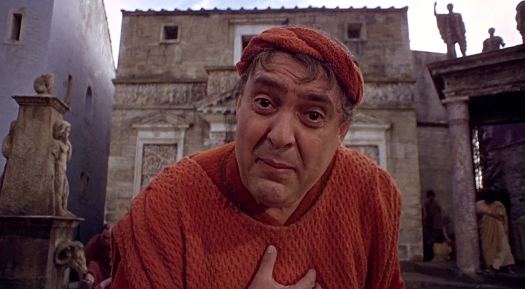 The credits roll to the tune of Stephen Sondheim’s “Comedy Tonight”, which may be my favorite song from any musical, as Zero introduces us to the main players. He’s Psuedolus, a slave owned by young Hero (Michael Crawford), son of unhappily married Senex (Michael Hordern) and his shrewish (not Jewish) wife Domina (Patricia Jessel, who’s a riot!). Hero has fallen in love with Philia (Annette Andre), the girl next door… except next door happens to be a whorehouse run by oily Marcus Lycus (Phil Silvers). Pseuodlus, who longs to be free, is charged with keeping tabs on Hero while Senex and Domina are away, and head house slave Hysterium (Jack Gilford) is charged with keeping tabs on Pseudolus! On the other side is the house of Erronius (Buster Keaton), an elderly man with poor eyesight still searching for his “lost children stolen by pirates” years before.

Got all that so far? Good, because things get complicated from here: Pseudolus takes Hero to Lycus’s emporium, only to discover Philia is pledged to Roman Captain Miles Gloriosus (Leon Greene), who’s on his way, while Pseudolus himself falls for the beautiful mute courtesan Gymnasia (Inga Neilsen). Houses gets switched, Senex returns home and thinks Philia is for him, Hero is sent to search for mare’s sweat (don’t ask!), Pseudolus and Lycus constantly try to screw each other over, Hysterium gets hysterical, Erronius thinks his house is haunted, The Captain demands his courtesan, and Domina is on her way home! All capped off by a mad chariot chase that, though I can’t find any evidence to back it up, looks like it contains some of Buster’s handiwork! 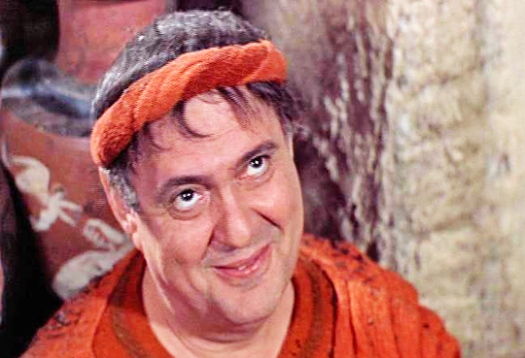 Zero, Silvers, and Gilford were all veterans of comedy, performing in venues from vaudeville to burlesque, and The Catskills to Broadway. This was Zero’s first film appearance after being blacklisted in Hollywood for fifteen years, during which time he became a huge Broadway star, originating the role of Pseudolus there (and winning a Tony), followed by his Tevye in FIDDLER ON THE ROOF (garnering another Tony). Mostel mugs for the camera and hams it up mercilessly, and I mean that in a good way! His inspired clowning has influenced generations of comics, and here he goes full throttle in a part he was born to play. 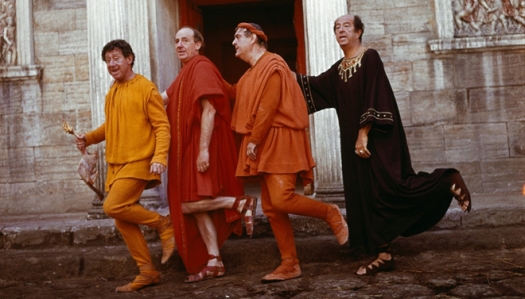 Equally uproarious is Phil Silvers , without his trademark glasses but as Bilko-like as ever as procurer Marcus Lycus. Silvers and Mostel play off each other like two dueling swordsmen, engaging in a battle of “Can You Top This?” with each other and generally having a ball. The underrated Jack Gilford doesn’t get discussed much these days, mostly being remembered from the film COCOON, but was a great comic actor in his own right, and his song “Lovely” (performed while dressed in drag!) is just one of the movie’s many highlights. Michael Crawford went from playing the naïve Hero to Broadway’s original PHANTOM OF THE OPERA a few decades later. Besides those previously mentioned, Familiar Faces include Alfie Bass, Roy Kinnear, DR. WHO #3 Jon Pertwee (whose brother Michael cowrote the screenplay with Melvin Frank), and an uncredited Ingrid Pitt as one of Lycus’s courtesans.

Then there’s Buster Keaton , still taking pratfalls at age 70 while suffering from the cancer that would kill him before the films’ release. Keaton’s role isn’t as big or as showy as the rest of the gang, but The Great Stoneface is always a sure-fire laugh getter, and his character plays an important part at the film’s conclusion. A FUNNY THING HAPPENED ON THE WAY TO THE FORUM is a fitting ending to Keaton’s feature film career, surrounded by a top-notch group of funnymen, and given a chance to make us laugh one more time. But let’s not end things on a melancholy note, but rather with how things begin, the opening credits from A FUNNY THING HAPPENED ON THE WAY TO THE FORUM. Take it away, Zero:

13 Replies to “Comedy Tonight: A FUNNY THING HAPPENED ON THE WAY TO THE FORUM (United Artists 1966)”