Vincent Price  traded in Edgar Allan Poe for William Shakespeare (and American-International for United Artists) in THEATER OF BLOOD, playing an actor’s dream role: Price not only gets to perform the Bard of Avon’s works onscreen, he gets to kill off all his critics! As you would imagine, Price has a field day with the part, serving up deliciously thick slices of ham with relish as he murders an all-star cast of British thespians in this fiendishly ingenious screenplay concocted  by Anthony Greville-Bell and directed with style by Douglas Hickox. 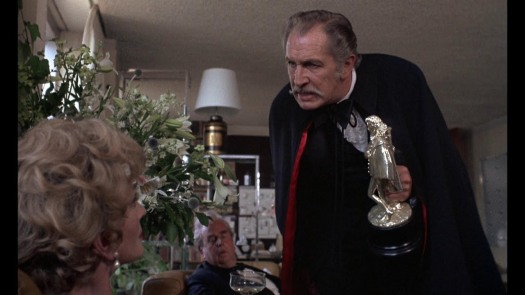 Edward Lionheart felt so slighted by both scathing criticism and once again being stiffed at the prestigious Critics’ Circle award, he broke up their little soiree by doing a swan dive into London’s mighty Thames. His body was never found, and everyone assumed they had seen Lionheart’s final performance, but unbeknownst to all he was fished out of the river by a band of drunken derelicts. Two years later, a series of gruesome murders based on Shakespeare’s plays begin to strike down the critics one by one, baffling Scotland Yard, until critic Peregrine Devlin puts two and two together and comes to the realization Edward Lionheart is alive and well and hell-bent on sweet revenge… 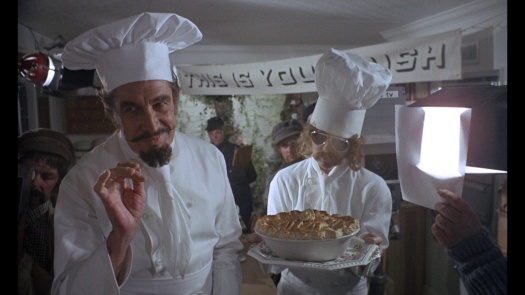 The murders get more and more ghastly as the film moves forward, as Lionheart rewrites Shakespeare to fit his bloody agenda and pick off some of England’s finest actors as the critics. His ragged followers descend on Michael Hordern ala JULIUS CAESAR, Dennis Price is speared and dragged behind a horse (TROILIUS AND CRESSIDA), Arthur Lowe is decapitated in a scene from CYMBELINE that’s reminiscent of Price’s Dr. Phibes films, Harry Andrews has a pound of flesh extracted (THE MERCHANT OF VENICE), Robert Coote’s  drowned in a vat of wine like the Duke of Clarence in RICHARD III (a part Price played in Universal’s 1939 TOWER OF LONDON, later graduating to essay Richard in Corman’s 1962 version), a neat twist on OTHELLO features Jack Hawkins and Diana Dors , Price’s future wife Coral Brown is burned to a crisp under a hairdryer in a campy take on HENRY VI, and flamboyant Robert Morley gets served his just desserts in a terrifying retelling of TITUS ANDRONICUS. Ian Hendry as Devlin is spared during a swashbuckling scene from ROMEO AND JULIET, only to have to be rescued at the finale in a nod to KING LEAR. 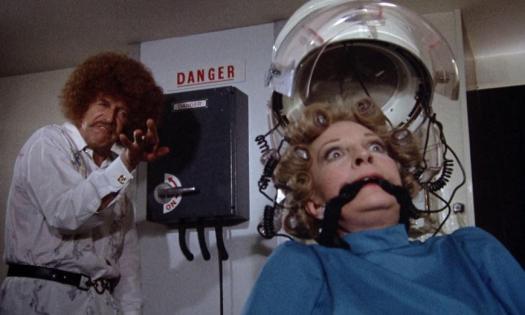 Price claimed THEATER OF BLOOD was one of his favorite roles, and it’s easy to understand why. Not only does he get to recite Shakespeare, he has the pleasure of offing his critics with gleeful delight! His contract with AIP had expired (though they would release the similar Amicus production MADHOUSE with Price the next year), horror films were beginning to go in a new direction, and Vincent Price was the last man standing of the classic horror era. He gives the part of Edward Lionheart his all, as he always did, playing to the balcony to deliver the gory goods his fans paid to see. THEATER OF BLOOD is the last of what horror fans consider the “Vincent Price Movie” subgenre, begun with his late 50’s William Castle shockers and continued with Roger Corman’s Poe films. It’s a fitting coda, though Price would keep making movie and TV appearances right up until his death twenty years later.

Diana Rigg gets a fun, showy role as Lionheart’s daughter/accomplice Edwina, a special effects person who aids and abets dear old dad on his murder spree. Rigg matches Price in the ham-slicing department, no small feat, and the Shakespearian trained GAME OF THRONES actress is a delight. Milo O’Shea and Eric Sykes represent the law, and Hammer veteran Madeline Smith is on hand as Devlin’s secretary. Yet everyone takes a backseat to Vincent Price at his bombastic best, making mincemeat out of his critics and making THEATER OF BLOOD a whole lot of fun for horror fans in general, and Price fans in particular.