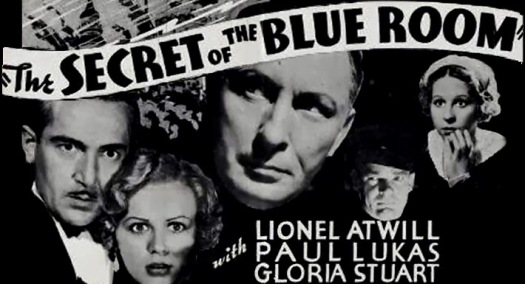 The horror cycle of the early 1930’s cast its dark shadow on other film genres. SECRET OF THE BLUE ROOM is one of those “old dark house/locked room” mysteries showing that influence; it’s a creepy, atmospheric little movie about mysterious murders, with horror vet Lionel Atwill front and center among the suspects. There aren’t any “monsters” here, but some good chills courtesy of director Kurt Neumann, who later directed the 1950’s sci-fi horrors KRONUS, SHE DEVIL, and THE FLY . 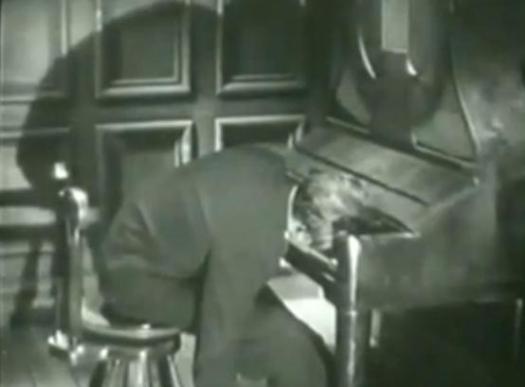 It’s a dark and stormy night (naturally!) at Castle von Hellsdorf, and Irene, daughter of Master of the House Robert, is celebrating her birthday with three suitors: Captain Walter Brink, Frank Faber, and Tommy Brandt, while outside, a mysterious stranger lurks. The conversation turns to ‘The Blue Room’, kept under lock and key after three strange (some say supernatural) murders occurred many years ago, always at One AM. Tommy, eager to “prove his courage” to Irene, proposes all three would-be beaus spend a night in ‘The Blue Room’, with himself going first. The next morning, Tommy has completely vanished from the room, despite it being locked! Frank follows up, and is found shot inside the locked room. The police are called in ,and the cagey Commissioner Forster holds an inquiry, where family secrets are exposed, the identity of that “mysterious stranger” revealed, and the killer is unmasked as…. ?

If you haven’t figured it out before the movie ends… well, you’re not a very good Armchair Detective! There are plenty of suspects to keep people guessing though, chief among them Lionel Atwill, who played ‘red herrings’ in films like this almost as much as he did mad scientists. Atwill’s presence lends SECRET OF THE BLUE ROOM some horror cred, as does the shadowy camerawork of Charles Stumar, who later shot WEREWOLF OF LONDON and THE RAVEN for Universal. Also lending horror cred is leading lady Gloria Stuart , in her second of three Universal Horrors. Future Oscar winner Paul Lukas (Walter) would appear twenty years later as Professor Aronnax in 20,000 LEAGUES UNDER THE SEA , Onslow Stevens (Frank) would return to horror in the 40’s with HOUSE OF DRACULA, and Robert Barrat (Paul) later played a Martian in 1951’s FLIGHT TO MARS. Character actor Edward Arnold , best remembered for playing corrupt businessmen and gangsters in prestige films, is on the right side of the law here as the Commissioner. 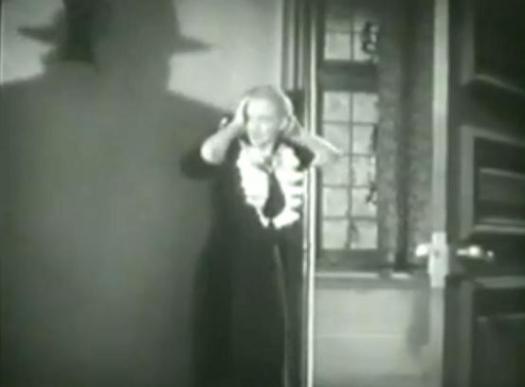 When Universal released its package of pre-1948 horror films to television in 1957 as SHOCK THEATER, SECRET OF THE BLUE ROOM was included, and if it’s good enough for Universal to qualify, it’s good enough for me! While it’s not out-and-out horror, the film’s got enough spooky moments and frights to keep horror buffs satisfied. Plus, it’s got Lionel Atwill… that’s more than enough reason to watch right there!