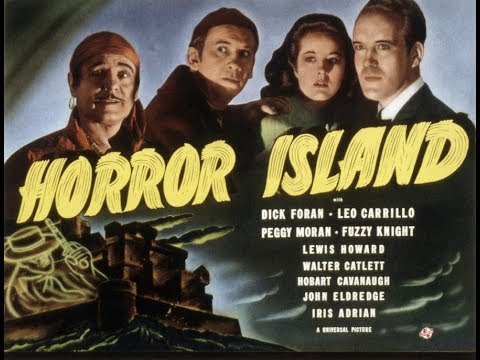 Universal Pictures kept cranking out the horrors, but HORROR ISLAND isn’t one of them. It’s as misleading a title as Hollywood ever produced, more of a comedy/mystery with some “old dark house” elements thrown in for good measure. This little ‘B’ was released as a double feature with MAN MADE MONSTER, and while its good for what it is, it ain’t horror!

Atmospherically directed by George Waggner and shot by Universal workhorse Woody Bredell , HORROR ISLAND  begins spookily enough with a peg-legged sailor trodding the docks attacked by the mysterious Phantom. Rescued from the briny water by hard-pressed for cash entrepreneur Bill Martin and his pal Stuff Oliver, we learn the sailor is Tobias Clump, a Spaniard who claims he has half a map of Sir Henry Morgan’s buried treasure – and The Phantom just stole the other half! Bill happens to have inherited Morgan’s Island, where twenty million dollars worth of pirate gold and jewels are hidden. They take the map piece to an expert, who claims it’s a fake, so Bill gets an idea to exploit the legend by starting a new business promoting excursions to Morgan’s Island and setting up suckers on a bogus treasure hunt.

After “meeting cute” with rich Wendy Creighton (and her jaded boyfriend with the preposterous name of Thurman Coldwater), Bill, Stuff, and Tobias set sail with their first guests: Wendy and Thurman, Bill’s cousin George (who wants to buy the island for himself), nosy cop Sgt. McGoon, meek Professor Quinley, and shady couple Rod and Arleen Grady. Bill and Stuff have tricked out the island’s castle (yes, there’s a castle) to frighten the customers, but there’s more unexplainable doings than they planned, and the customers get more than they bargained for as they get picked off one by one by The Phantom…

The cast is stocked with Universal contract players, all of whom are good at what they do. Dick Foran and Peggy Moran (stars of THE MUMMY’S HAND ) make likeable leads and carry the picture along with comic actors Leo Carrillo (Tobias), Fuzzy Knight (Stuff), Walter Catlett (McGoon), and Iris Adrian (Arleen). Everything is wrapped up neatly in just over an hour, and if you like movies with secret passageways, mysterious phantoms, and things that go “boo” in the night, you’ll enjoy HORROR ISLAND… but it ain’t horror!