The day has finally arrived. November 2, 2018. I ordered a free trial of Netflix specifically so I could watch the completed version of Orson Welles’ final film, THE OTHER SIDE OF THE WIND . Welles worked on this project for over a decade, and the footage sat for decades more before finally being restored and re-edited. A film buff’s dream come true – perhaps. There were questions I needed answered. Was there enough salvageable material to make a coherent movie? Does it follow Welles’ vision? Would it live up to the hype? Was it worth the wait?

Welles shot over ten hours of film, utilizing different film stocks (Super 8, 16mm, 35mm), switching back and forth from color to classic black and white, to create his movie, which is a documentary about the movie-within-the-movie’s director – a movie-within-a-movie-within-a-movie. It took six years (from 1970-76) to shoot due to financial problems and his own perfectionism, and Welles had about a third of the film edited himself before his death in 1985. Legal battles have kept THE OTHER SIDE OF THE WIND unfinished and in limbo ever since, until at last producer Frank Marshall (who appeared in it as an young filmmaker) and Netflix stepped in earlier this year. A team was assembled to put the whole thing together, notably editor Bob Murawski, who (I think) painstakingly captured the vision of Welles and makes this 40+ year old film really come alive.

The film itself centers around Jake Hannaford, an Old Hollywood director attempting to reach a new audience by making a youth oriented film called THE OTHER SIDE OF THE WIND. Hannaford has just perished in a car crash (was it an accident or suicide?), and what we get is a cinema verite-style mockumentary of Hannaford’s 70th birthday party, where he’s to unveil his latest masterpiece. The film jumps all over the place with it’s multiple cast members, and Welles takes the opportunity to skewer some of his bugaboos: Old vs New Hollywood, cineastes and pretentious film school types, his critics, auteur theory (though a case could be made for Welles being the original film auteur!), studio honchos only out for a buck, macho men, sycophants and hangers-on. Using dazzling and innovative techniques coupled with some truly stunning imagery, Welles made a film way ahead of its time, and perhaps it’s just as well that it sat so long, when it can finally be appreciated. 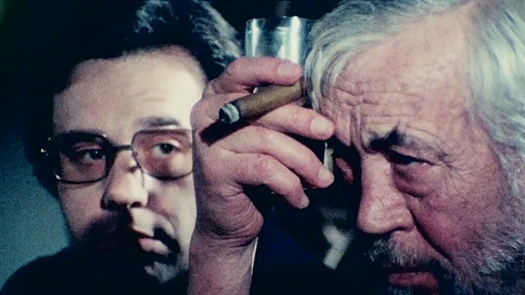 John Huston  is incredible as the dissipated, tortured genius Hannaford, trying his damnedest to get his film made his way. Huston, one of Old Hollywood’s greatest directors himself, is at turns charming and cutting as the Welles stand-in Hannaford, who may or may not be bisexual, but is definitely misogynistic, alcoholic, and at the end of his rope. Welles acolyte Peter Bogdanovich plays Hannaford acolyte Brooks Otterlake, and does his mentor proud in the part. Susan Strasberg gives what I think is her best performance ever as acidic critic Julie Rich, patterned on Welles’ bete noir Pauline Kael. Edmond O’Brien , ill and already suffering the devastating memory loss of the Alzheimer’s disease that killed him, delivers a great performance as Hannaford actor Pat Mullins in his final role. Paul Stewart , CITIZEN KANE’s butler, plays another of Hannaford’s cronies, Matt Costello. My God, you could have a field day just spotting Familiar Faces in roles large and small: Stephane Audran, John Carroll , Claude Chabrol, Norman Foster , Curtis Harrington, Dennis Hopper , Henry Jaglom, George Jessel, Rich Little, Paul Mazursky, Mercedes McCambridge,  Cameron Mitchell , Lilli Palmer, Stafford Repp, Angelo Rossitto , Benny Rubin , Gregory Sierra, Dan Tobin, and so many more.

Hannaford’s film within the film stars Welles’ mistress Oja Kador (who also gets a  co-screenwriting credit) and actor Bob Ransom in the pivotal part of John Dale. This is where Welles truly shines, making it a comment on the pretentiousness of New Wave Cinema by having it look in some scenes (to my eyes, anyway) like some kind of AIP hippie or Crown-International sexploitation flick. I’m sure Welles was familiar with the low-budget work of people like Roger Corman and Richard Rush , and in one shot taken in a moving car I noticed a drive-in advertising a double feature of I EAT YOUR SKIN and I DRINK YOUR BLOOD. Principle cinematographer Gary Graver (who also appears as the documentarian) toiled for years in exploitation cinema, particularly with Al Adamson. Graver (who directed porn in his spare time, and actually managed to get Welles to edit one of his Triple-X efforts!) worked side by side with Welles, and his work here is nothing short of brilliant. 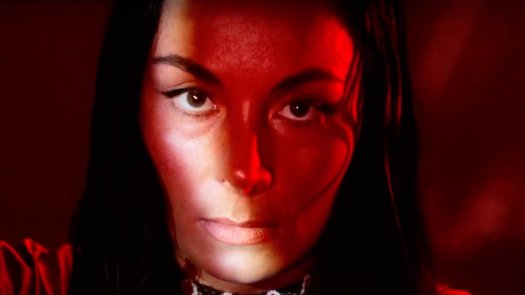 Hardcore film buffs will be totally blown away by THE OTHER SIDE OF THE WIND, Orson Welles’ last movie. It’s a heady experience, and I thought it well worth the wait. It may not be The Great Man’s best, but as a lifelong movie lover I thoroughly enjoyed it. Kudos to all involved in bringing this historic piece of art to life. The question I must ask myself now, as I do with all films, is would I watch it again?