As a classic film blogger, I’m contractually obligated to cover film noir during the month of “Noirvember”, so every Tuesday this month I’ll be shining the spotlight on movies of this dark genre! 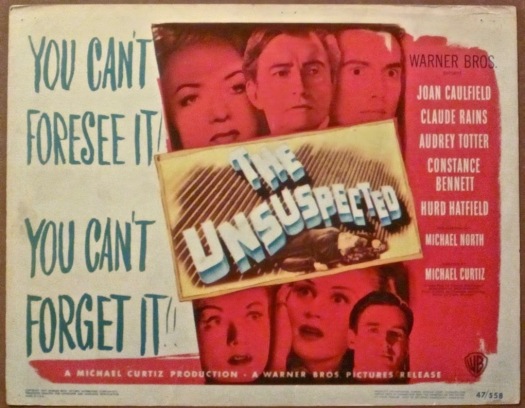 Claude Rains  received second billing in 1947’s THE UNSUSPECTED, but there’s no doubt who’s the star of this show. Nobody could steal a picture like Rains, as I’ve stated several times before – his sheer talent commands your attention! Here, he gives a chilling portrayal of a cold, calculating murderer in a Michael Curtiz noir based on a novel by Edgar Award-winning mystery writer Charlotte Armstrong, and runs away with the film. Joan Caulfield gets top billing, but let’s be honest – it’s Claude’s movie all the way! 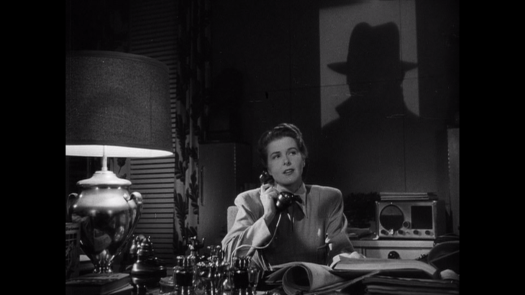 The film begins with a frightening scene played mostly in shadow, as a figure creeps into the office of Victor Grandison (Rains) and murders his secretary Robyn Wright while she’s on the phone. The call is cut off as she screams, and the figure hangs her body from the chandelier to make it look like a suicide. We get a brief glimpse of the killer’s face reflected in the polished desk… 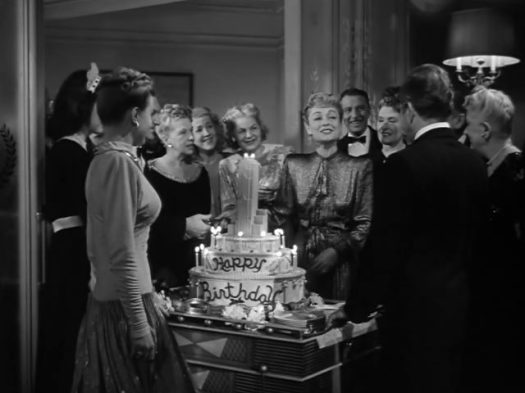 That face belongs to Grandison, who we learn is the host of a radio series called “The Unsuspected”, and here Rains (as Grandison) uses his mellifluous cultured voice to relate true-crime tales of terror to his listening audience. A surprise birthday party is given in his honor at the mansion he lives in, owned by his late niece Matilda Frazer. Accompanied by his producer Jayne Moynihan, Victor’s greeted by his guests, including his other niece, the slutty Althea Keane and her lush of a husband Oliver, whom she once stole from Matilda. Homicide detective Richard Donovan, a friend of Victor’s, is also on hand, as is a mysterious stranger named Steven Howard.

Howard, it seems, married Matilda before she died in an accident at sea. Victor is suspicious of Howard, thinking he’s out for Matilda’s money (which Victor’s been lavishly living off), and has Donovan do a background check. Turns out Howard has money of his own (his dad’s in oil), and Althea takes an interest in him. But Matilda is not dead, and she returns home with no recollection of who Howard is…

The strength of THE UNSUSPECTED lies in Rains’s performance as Victor, a smiling cobra who’s smooth as silk and deadly as a razor. Victor is outwardly  kind and gentle, masking the murderous beast within. He’s wound tighter than a drum, and it’s not until the final scene where, while broadcasting his show, he realizes he’s been found out and is trapped, that he cracks under pressure and makes his confession. Anyone interested in a Master Class in film acting need only to watch Claude Rains perform in this film – or any of his films, for that matter!

Nominal star Joan Caulfield (Matilda) was a popular player in the 1940’s and early 50’s, usually cast in lighter, more comedic fare. She’s okay in this one as the loving niece of Rains, but let’s be honest… the film’s remembered today as a showcase for Rains’s talent. Constance Bennett (Jayne) was a big star in the 30’s, now moved into character roles as she’d gotten older. Audrey Totter , adding another superb ‘Mean Girl’ characterization to her impressive film noir resume, is at her bitchy best as Althea. Hurd Hatfield doesn’t get much to do as soused spouse Oliver, Fred Clark (making his film debut) as Donovan is good as always, and Jack Lambert stands out as Victor’s sometimes accomplice Poole. Michael North (usually billed as Ted) failed to impress me in the key role of Howard.  There’s plenty of other Familiar Faces to spot: Nana Bryant, Bess Flowers (in the birthday party scene), Art Gilmore (as Victor’s radio show announcer), Douglas Kennedy , Harry Lewis, and Ray Walker .

This was Curtiz’s first film for his new production company and he made the most of it. His skillful direction is aided by DP Woody Bredell , who worked on all those 40’s Universal Horror flicks and with Robert Siodmak during that director’s Universal run of film noir classics. Frederick Richards’s editing really stands out, and Franz Waxman provides another classic score. There are echoes of LAURA and GASLIGHT in THE UNSUSPECTED, but the film’s not derivative; it’s a powerful noir drama made by pros, and though it may not be at the top of anyone’s film noir lists, it’s a damn good one, with Claude Rains leading the way in another memorable performance.