The best films noir deal with post-WWII disillusionment, and that’s exactly what drives Richard Basehart’s sad sack Warren Quimby in TENSION. This cynical, downbeat, and downright sordid little tale of infidelity and murder is  boosted by first-rate performances from Basehart and scorchingly hot Audrey Totter as his manipulative bimbo of a wife, with a taut screenplay by Allen Rivkin and solid direction by John Berry. It may not make anyone’s top ten list (or even top thirty), but it’s one of those ‘B’ films that really works, provided you’re willing to suspend disbelief for an hour and a half. 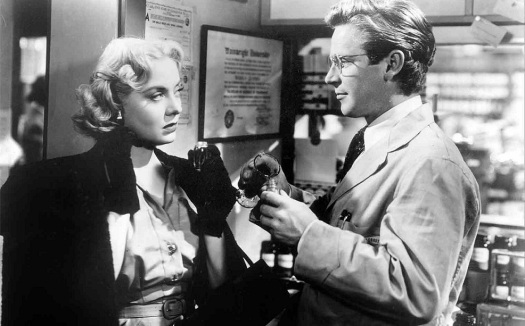 Mild mannered pharmacist Quimby met and married Claire while stationed in San Diego during the war. He, like many others, hopes to someday live the American Dream: house, kids, the whole nine yards. Trampy Claire doesn’t give a crap about that; she prefers excitement, the high life. Claire is messing around with well-off Barney Deager, and when Quimby confronts them on the beach, he gets an ass kicking (Deager: “Now get going and don’t come back, ya four-eyed punk!”). Something snaps inside Quimby, and he gets contact lenses, calls himself ‘Paul Southern’, and rents a place to establish a residence, meeting and dating pretty young Mary Chanler.

But Quimby has a plan, and begins a series of harassing phone calls to Deager, saying he’s “gonna get” him. He goes to Deager to tell him there’s no hard feelings, then (as Southern) sneaks into Deager’s house to murder him. But the meek Quimby can’t go through with it, and his plan changes to move forward with Mary and start a new life. Then Claire comes back, Deager is found dead, and homicide cops Collie Bonnabel and Blackie Gonzalez are on the case, ratcheting up the tension to trap a killer…

Basehart is perfect as wimpy Warren Quimby, the would-be killer who can’t get the job done. He’s such an underrated actor, never quite getting that signature role but doing fine work throughout his career. His noir resume includes the classics HE WALKS BY NIGHT and Robert Wise’s HOUSE ON TELEGRAPH HILL, mainstream dramas like Fellini’s LA STRADA, MOBY DICK (as Ishmael), THE BROTHERS KARAMAZOV, and the title role in HITLER. Basehart’s most familiar to fans as Admiral Nelson on Irwin Allen’s 1960’s TV series VOYAGE TO THE BOTTOM OF THE SEA , adding gravitas to the sci-fi silliness. One of my favorite Basehart films is the early TV Movie SOLE SURVIVOR (1970), a supernatural WWII drama featuring William Shatner and Vince Edwards; you can catch this one on YouTube – it’s worth it!

Noir’s Queen of Mean Audrey Totter is the slutty, manipulative Claire (sexy sax music plays whenever she comes onscreen!), treating Quimby like dirt until she needs him. Claire’s hot as a pistol and hard as nails, and is another fine portrayal in Audrey’s Bad Girl Hall of Fame. Barry Sullivan plays homicide Lt. Bonnabel, introducing the movie in a pre-credits sequence while fiddling with a rubber band. Sullivan’s Bonnabel uses some unorthodox (and probably unconstitutional!) methods to snare the killer (and I’m sure you’ve guessed whodunnit by now), and that’s where that suspension of disbelief I mentioned comes in handy. His partner Gonzalez is another film noir regular, beefy William Conrad . Cyd Charisse gets a non-dancing part as sweet’n’innocent Mary, Lloyd Gough plays the unsympathetic victim Deager, Tom D’Andrea is Quimby’s soda-jerk pal, and Familiar Faces Virginia Brissac, John Gaulladet, Theresa Harris, and Phil Van Zandt appear uncredited.

Though TENSION may not rank high on anyone’s all-time great films noir lists, it’s a grimy little ‘B’ thriller that’s worth watching. It’s got good performances by Basehart and Totter, moody cinematography by Harry Stradling, and a premise that, while maybe not believable, will have you stretched out in suspense right until the end.