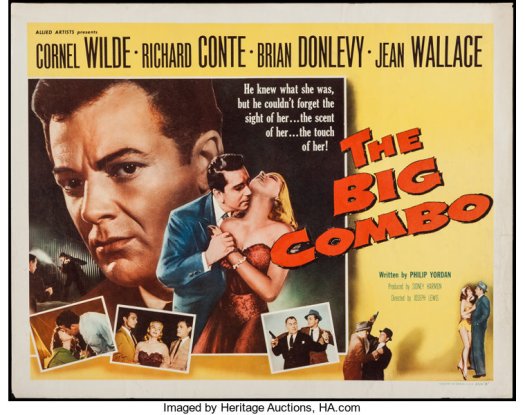 (ATTENTION: There’s a surprise waiting for you at the end of this post, so read on…)

Joseph H. Lewis started his directing career with low-budget Westerns starring singing cowboy Bob Baker and East Side Kids programmers, and ended it back on the range doing epsiodes of THE RIFLEMAN, GUNSMOKE, and THE BIG VALLEY. In between, he created some of the finest films noir the genre has to offer: MY NAME IS JULIA ROSS , SO DARK THE NIGHT, THE UNDERCOVER MAN, and especially GUN CRAZY . His last big screen noir outing is the culmination of his work in the genre, 1955’s THE BIG COMBO.

The plot is fairly simple: Police Lt. Leonard Diamond is out to crack gangster Mr. Brown’s “combination”, which controls crime in the city. But Philip Yordan’s screenplay takes that plot and adds exciting twists and turns, indelible characters, and a level of violence audiences weren’t used to seeing at the local bijou. Lewis, aided and abetted by cinematographer John Alton , uses that script as a springboard for some darkly dazzling visuals; the opening scene alone, with a young girl being chased down a dark alley by two menacing thugs, finds Lewis and Alton showing off their talents. The film moves at lightning speed, a pedal-to-the-metal noir that doesn’t let up until the chilling conclusion inside an airplane hangar.

Cornel Wilde  is the obsessed police detective determined to put an end to Mr. Brown’s reign of terror. Wilde had started his own production company along with his wife Jean Wallace (who plays Brown’s moll Susan), and this was their first release. Wallace does fair work in the part, though her performance is eclipsed by the rest of the cast. THE BIG COMBO got them off to a slam-bang start, and their next production, STORM FEAR, found Wilde in the director’s chair for the first time, a seat he would take again for films like THE NAKED PREY, BEACH RED, and NO BLADE OF GRASS.

Mr. Brown wasn’t Richard Conte’s first gangster role, nor would it be his last, but it may very well be his best. Mr. Brown is a smug cocksure sadist, deriding Wilde’s Lt. Diamond every chance he gets (“Book me, small change”, he sneers, referencing the cop’s low-wage job), and his staccato line delivery aids the film’s breakneck pace. Brian Donlevy , no stranger to gangster parts himself, plays his second-in-command McClure, once a big shot, now reduced to flunky status. Donlevy was one of noir’s greatest character actors, and his McClure adds another fine portrait to his Rogue’s Gallery. Helen Walker , in her final screen role, plays the mysterious “Alicia”; to say more about the character would spoil the film, and I want you to see it for yourselves! Suffice it to say Miss Walker gives a bravura career finale.

Many modern critics see ‘gay subtext’ everywhere they look in older films; most of the time it’s something that’s not really there. But the characters of Brown’s hit men Fante and Mingo are without question “more than just friends” in this one. It isn’t anything overt, but Yordan’s script subtly suggests these two psychcopaths are homosexual lovers, and the performances of screen tough guys Lee Van Cleef (Fante) and Earl Holliman (Mingo) leave no doubt in my mind about their off-duty relationship. They don’t flaunt their sexual persuasion or camp it up, but watching their nuanced performances, you just know there’s something beneath the surface. Kudos to both actors for giving these stone-cold killers a deeper shading.

THE BIG COMBO is a gripping crime drama in every way, and a fitting end to Lewis’s film noir body of work. It’s dark, sordid, and unsavory, and must-see for fans of the genre. Those who’ve never had the opportunity to watch it are missing a real treat – and since it’s in public domain, I’ll give you that opportunity right now! Consider it my “Happy Noir Year” present to you and enjoy!: