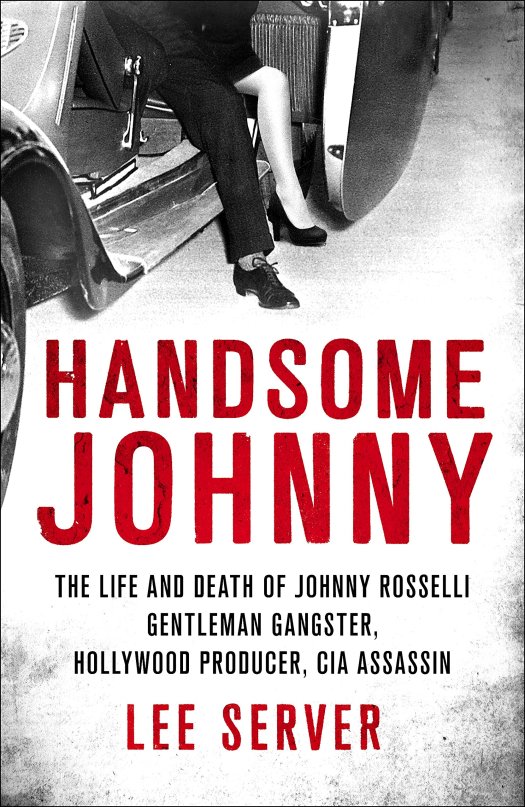 Ever since THE GODFATHER, I’ve been fascinated by the history of the Mafia in America. I’ve devoured just about every book on the subject, and consider myself a bit of an expert on this clandestine crime cartel. I believe it was while reading Ovid Demaris’s 1980 THE LAST MAFIOSO, a biography of gangster-turned-rat Jimmy “The Weasel” Fratianno, that I first became aware of the man known as Johnny Rosselli. His story captivated my interest, so when I saw a new biography of Rosselli was on the shelves at the local Barnes & Noble, I thought it’d make a great Christmas present… for myself! Naturally, I bought a copy, eager to learn more about this man who played a pivotal role in both the Mafia’s rise and the shadowy underbelly of American life in the 20th Century.

Author Lee Server is someone I’m unfamiliar with, which is strange, because his previously released titles sound right up my alley. There’s THE BIG BOOK OF NOIR, a compendium of articles about film noir, pulp fiction, and the like, and biographies of Sam Fuller, Robert Mitchum, and Ava Gardner. Obviously, Server knows the Hollywood turf, and HANDSOME JOHNNY is a meticulously researched account of Rosselli’s life. At times, his prose reminded me of James Ellroy, a perfect fit for this material.

Server takes us on a trip down the dark alleys and glittering neon lights of 20th Century America, and Johnny Rosselli was there for it all. The slum kid immigrant who hit the road as a teen; Prohibition in the days of Al Capone; Hollywood’s classic era, where he made friends with Harry Cohn, slept with Jean Harlow, married ‘B’ starlet June Lang, milked the studios with shady labor practices, and even produced a couple of films (CANON CITY, HE WALKED BY NIGHT); the glory days of Las Vegas; political shenaningans with Joe Kennedy; and the ill-fated attempt by the CIA to assassinate Fidel Castro, which may have cost President John Kennedy his life. The famous and the infamous rub shoulders behind this opaque curtain, lifted by Server in a gripping read I just couldn’t put down. You won’t believe some of the names who pop up in HANDSOME JOHNNY, but I’m not talkin’ – you’ll have to pick up a copy for yourself!

My only quibble with Server comes when speaking about Rosselli’s involvement with Eagle-Lion Films, successor to Poverty Row studio PRC. He calls Edgar G. Ulmer’s DETOUR  a “rock-bottom crime drama” and states a “doped-up Bela Lugosi” was on the roster. DETOUR has rightly been hailed as a classic in the film noir canon, while Lugosi only made one pic for PRC, THE DEVIL BAT (a personal favorite of mine!). But I’m just nitpicking here based on my own personal bias. Gangster buffs, movie gossip fans, political junkies, and history nerds like myself will devour HANDSOME JOHNNY like a platter of calamari washed down with strong bathtub gin, a right-between-the-eyes look at Rosselli the man and a side of America you don’t learn about in school. I highly recommend you buy it on your next trip to the bookstore!