I’ve written about Bela Lugosi’s infamous ‘Monogram 9’ before, those ultra-cheap spectacles produced by the equally ultra-cheap Sam Katzman for low-budget Monogram Pictures. These films are all Grade Z schlock, redeemed only by Lugosi’s presence, giving his all no matter how ludicrous the scripts or cardboard the sets. BOWERY AT MIDNIGHT is a cut above; still schlock, but the pulpy premise is different from the rest, and Bela gives what’s probably his best performance out of the whole trashy bunch.

Lugosi plays kindly Karl Wagner, a benevolent soul who runs the Friendly Mission down on the Bowery. But wait – it’s all a front for recruiting down-on-their-luck criminals into Wagner’s gang of thieves. And when he’s done with them, he bumps them off and gives the corpses to ‘Doc’, a dope fiend ex-medico who uses the bodies for his own nefarious purposes! 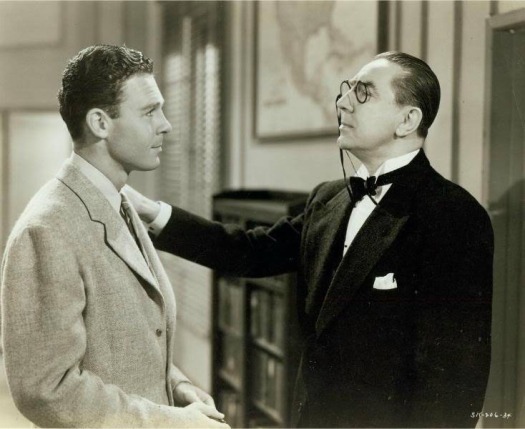 But wait again! Wagner’s not really Wagner, he’s eminent psychology Professor Brenner, who specializes in deviant behavior! Wagner’s pretty nurse at the mission Julie Malvern has a rich Park Avenue boyfriend, Richard Dennison, a student of Brenner, who’s disdainful of Julie working with all those Bowery bums. “I want you to give up that silly job”, he scolds, “Saving humanity, it’s ridiculous!”, then later, “Go ahead and have all the fun you want, you and your social work”, as he petulantly walks out the door. Yep, Richard’s a real jerk! 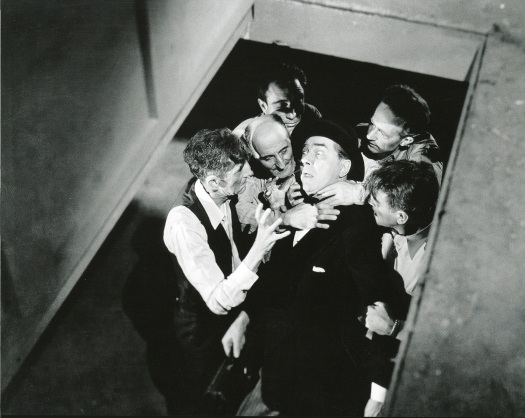 Wagner/Brenner aligns himself with “dangerous killer” Frankie Mills, a young sociopath who has no qualms about doing Brenner/Wagner’s dirty work (though the split-personalited mastermind doesn’t mind murder himself, as when he tosses one of his henchmen off a rooftop to create a diversion!). Newly appointed police detective Peter Crawford is hot on Frankie’s trail, and that trail leads to the Friendly Mission, where Richard has gone undercover to spy on Judy (he thinks she’s banging Bela!!). Richard gets himself killed, the cops figure things out and bust the joint, and Wagner/Brenner hides in Doc’s secret basement, where we learn Doc’s been turning those corpses into Zombies!! The Professor gets his just desserts… but somehow Richard is de-zombified and reunited with Judy for a happy ending!

Bela tones down the bombast and plays the part of the double-life prof fairly straight. He’s damn good too, rising above the material and making the movie a memorable one (far as Monogram pics go, anyway!). He’s reunited with his DEVIL BAT costar Dave O’Brien as the cop Crawford, and though they don’t get much screen time together, it’s fun to see them briefly go at it again. DETOUR’s Tom Neal plays the psycho Frankie, pretty ‘B’ ingenue Wanda McKay is pretty Judy, and handsome ‘B’ lead John Archer the jerky Richard. Others in the cast of note are Lew Kelly as the doped-up ‘Doc’, Vince Barnett as the unfortunate hood who gets thrown off the roof by Bela, Bernard Gorcey in a funny cameo as a haberdasher, and silent stars J. Farrell MacDonald and Wheeler Oakman as (respectively) a cop and a crook.

Sure, sometimes the dialog is downright dumb, the script relies too much on coincidence, and those cardboard sets were seen in countless Monogram epics (and it’s a wonder they didn’t collapse!). And yet… BOWERY AT MIDNIGHT is a fun little film, thanks in large part to the power of Bela Lugosi, who could (and often did) make a silk purse out of a sow’s ear. It’s the best of his ‘Monogram 9’, which isn’t saying much, but think about this… movie buffs are still watching Bela’s low-budget schlock, seventy-plus years after the fact. There’s a reason for that, and his name is Bela Lugosi.

11 Replies to “Diamond Among the Coal: Bela Lugosi in BOWERY AT MIDNIGHT (Monogram 1942)”