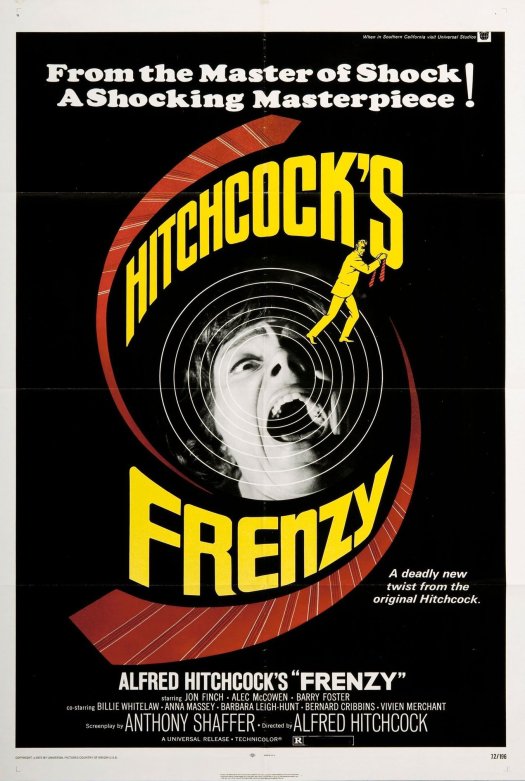 Alfred Hitchcock’s  previous two films, TORN CURTAIN (1966) and TOPAZ (1969) weren’t well received by critics, who claimed The Master of Suspense was too old-fashioned and had lost his touch. One wag even suggested that, after fifty years in films, it was time to put Hitch out to pasture! But Hitchcock wasn’t quite ready for a life of tea and crumpets in the garden, and came back with 1972’s FRENZY, complete with all the blatant sex, nudity, gore, and profanity of other early 70’s auteurs, proving he could not only keep up with the times, but surpass them by giving us the blackest of horror comedies.

Hitchcock had returned to his native England before to make a few films, but always with actors who had box office appeal in America (Ingrid Bergman and Joseph Cotten in UNDER CAPRICORN, Marlene Dietrich and Jane Wyman in STAGE FRIGHT). This time around, he uses an All-British cast of superb actors to tell his grisly little tale of a psycho sex killer on the loose in London, and an innocent man accused of the crimes. Anthony Shaffer (SLEUTH, THE WICKER MAN) adapted Arthur LeBern’s novel GOODBYE PICCADILLY, FAREWELL LEICESTER SQUARE and added some macabre humor to the gruesome goings-on, which fit right in with Hitchcock’s playful style.

We begin with a woman’s nude body found floating in the Thames (and an early cameo for Hitch!), and learn she’s yet another victim of ‘The Necktie Killer’, a “criminal, sexual psychopath” that rapes and murders his prey. We then meet Dick Blaney, an ex-RAF pilot and unlovable loser who’s just been fired from his job as a barman. Dick’s a bitter, angry young man who seems to blame everybody else for his problems, including his ex-wife Brenda, now a successful “matrimonial agent”. Dick’s prone to drinking heavily and violent outbursts; despite all this, his girlfriend Babs remains loyal.

In contrast, Dick’s friend Bob Rusk is the charming, outgoing, and successful owner of a wholesale produce company. Bob’s the type of guy you’d like to left a few pints with down at the pub… so naturally, he turns out to be the Necktie Killer that’s been terrorizing London! When Bob brutally rapes and strangles Dick’s ex Brenda in her office, Dick is spotted in the area by her secretary. Finding her boss’s dead body, she tells Scotland Yard that Dick was in the office just the other day, arguing and carrying on, pointing the finger of suspicion on him, and from there, circumstances go rapidly beyond Dick’s control… 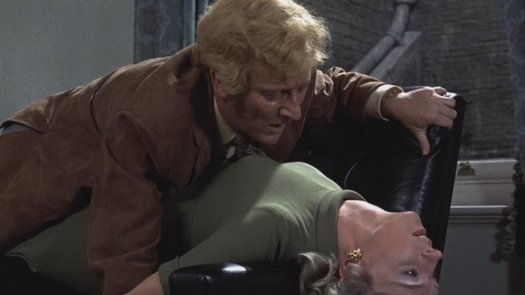 Jon Finch (Dick) was no stranger to horror, having previously been in Hammer’s THE VAMPIRE LOVERS and HORROR OF FRANKENSTEIN. Even though Dick’s a shit, you can’t help but feel sorry for him, and that’s due in large part to Finch’s acting. Barry Foster (Bob) is charming on the outside, but creepy as hell when he’s in a “frenzied” state. Hitchcock had seen Foster in the 1968 horror TWISTED NERVE, and cast him for the part after Michael Caine turned it down (I know, hard to believe Caine turning something down, right!). The solid supporting cast includes Anna Massey as the doomed Babs, Barbara Leigh-Hunt as the doomed Brenda (just doesn’t pay to get involved with Dick!), Alec McCowan as Inspector Oxford and Vivien Merchant as his wife, and Bernard Cribbins, Jean Marsh (UPSTAIRS, DOWNSTAIRS), and Billie Whitelaw.

Those famous “Hitchcock Touches” are still around, including the magnificent overhead shot of the Thames River in the opening by DP Gilbert Taylor . There’s a long, slow tracking shot down a winding staircase onto the street, a Hitchcock trademark. The scenes between McCowan and Merchant, an amateur gourmet chef serving her hubby the vilest-looking food while they casually discuss the case, are gems, as is the “potato truck” scene where Rusk frantically looks for his tie-pin, grasped in Babs’s dead hand inside a sack of spuds. Alfred Hitchcock showed his critics he was far from being washed up, and while FRENZY may not rank as his greatest (there are just so many to choose!), it’s an effective, gripping thriller that’ll grab you by the necktie and not let go until the end – and what an ending it is,  a deliciously twisted shocker that I’m not going to spoil for you. You’ll have to watch and see for yourselves!

This post is part of The Third Annual Alfred Hitchcock Blogathon, hosted by Maddy Loves Her Classic Films. To read more entries on The Master of Suspense’s movies, just click on this link! Thanks for having me again, Maddy!