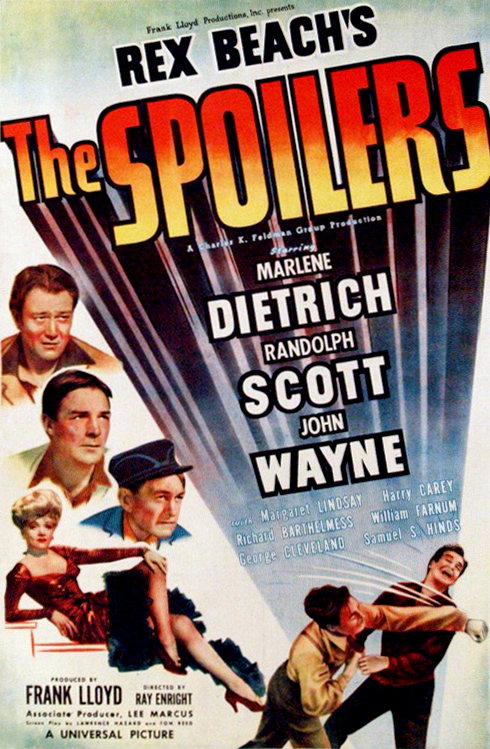 What’s this?? A “Northern” Western set in 1900 Alaska Gold Rush territory starring my two favorite cowboys, John Wayne and Randolph Scott ? With the ever-enticing Marlene Dietrich thrown in as a sexy saloon owner? Count me in! THE SPOILERS is a big, brawling, boisterous film loaded with romance, action, and, most importantly,  a sense of humor. It’s the kind of Hollywood entertainment epic that, as they say, “just don’t make ’em like that anymore”. I’ve never been quite sure who “they” are, but in regards to THE SPOILERS, they’re right – and more’s the pity!

Rex Beach’s popular 1906 novel had been filmed three times before (1914, 1923, 1930), and would be one more time after (in 1955), but with The Duke, Rugged Randy, and La Dietrich on board, this has got to be the best of the bunch. Even though audiences were more than familiar with the story, which would be used time and time again unofficially (that is, stolen!) in lesser Klondike films, THE SPOILERS was a big hit, raking in over a million dollars at the box office (a hefty sum at the time!).

Prospector’s claims are being jumped by unscrupulous officials, chief among them new Gold Commissioner Alexander McNamara (Scott). Big Roy Glennister (Wayne), co-owner of the Midas Mining Company, returns from Seattle, smitten with pretty young Helen Chester, niece of new law’n’order Judge Stillman, who’s secretly in cahoots with McNamara. Cherry Malotte (Marlene), operator of The Northern Saloon and Roy’s gal pal, is jealous of the attention her man’s giving Helen, and flirts with McNamara. The two crooked officials make an attempt to wrest The Midas from Roy and his partner, crusty old Al Dextry, through legal chicanery, resulting in Roy jailed on a trumped-up murder charge. Cherry discovers the truth and assists in freeing Roy before the crooks can set him up to be killed, and the entire thing winds up with a knock-down, drag-out, four-minute saloon brawl (yes, I timed it!) between Wayne and Scott (and their stunt doubles Eddie Parker, Allen Pomeroy, Gil Perkins, and Jack Parker, to give credit where credit is due!).

Duke only gets third billing behind Marlene and Scott, even though he’s really the star of the show, mainly because he was on loan from Republic Pictures, while Randolph was under a Universal contract, and Marlene was… well, Marlene! Wayne and Dietrich were in the midst of a torrid affair begun while shooting 1940’s SEVEN SINNERS together, and you can practically feel the heat between them rising from the screen, giving the sexual innuendos they throw at each other (courtesy of screenwriters Lawrence Hazard and Tom Reed) a little extra zip! When Duke tells Marlene (use your inner John Wayne voice here), “I imagine that dress is supposed to have a chilling effect. Well, if it is, it isn’t working – cause you’d look good to me, baby, in a burlap bag”, his eyes tell you he means it!

Randolph Scott turns his syrupy Southern charm to The Dark Side, and makes for an oily villain. Scott had played shady characters before, but none as the out-and-out bad guy of the piece, and wouldn’t again until his last film, 1962’s RIDE THE HIGH COUNTRY. Another actor usually on the right side of the law, Samuel S. Hinds , is the crooked judge. Harry Carey (Sr) plays Wayne’s partner Dextry, mentoring the younger man onscreen much as he did off it. Margaret Lindsay gets the thankless part of Helen – sorry, but she’s no match for Marlene! Former D.W. Griffith star Richard Barthelmess does good work as saloon card dealer The Bronco Kid, who carries a torch for his boss Cherry.

There are other interesting casting choices in THE SPOILERS. William Farnum , who starred in the 1914 original, is on hand as a lawyer on the side of the good guys. Hollywood’s perennial souse Jack Norton plays the town drunk, and gets to perform some heroics for a change! Robert W. Service, a real life poet who wrote about the Yukon Gold Rush days, has a brief bit as (what else?) a poet (you can read his most famous, “The Shooting of Dan McGrew”, by clicking on this link ). George Cleveland and Russell Simpson are a pair of grizzled old miners, and oh-so-many other Familiar Faces appear: Irving Bacon, Marietta Carey (as Cherry’s maid Idabelle), Willie Fung , weaselly Charles Halton, Bud Osbourne – happy hunting!

Director Ray Enright keeps the pace brisk and the comedy breezy, like when Idabelle runs into Roy wearing blackface – wait, I didn’t tell you The Duke appears in blackface? Don’t worry, it’s all part of the plot, as is when he comes out wearing one of Marlene’s feathery nightgowns. Wait, I didn’t tell you he appears in semi-drag, too? Well, if your appetite isn’t whetted enough by now to watch THE SPOILERS, then I guess there’s no hope for you. If it is, strap yourselves in, because you’re about to go on one hell of an entertaining ride!