Do you like movies with gloomy old mansions, secret passageways, clutching hands behind curtains, bloodcurdling screams, and the like? How about we throw in some Chicago gangsters and a hidden pirate treasure? Then you may like HOUSE OF SECRETS, a ‘B’ mystery originally sold to audiences as a horror thriller. It’s no classic, to be sure, but it is an enjoyable little low-budget film produced by tiny independent Chesterfield Pictures, who specialized in this sort of thing, and featuring a better than average cast of Familiar Faces. 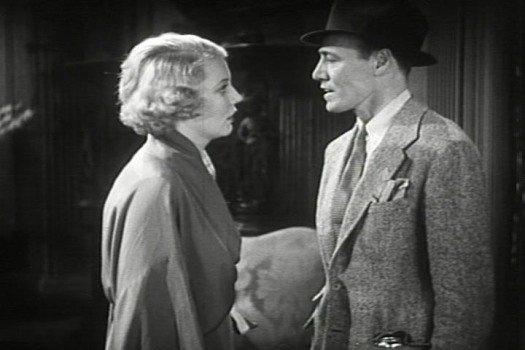 Aboard a ship bound for London, a young American woman is accosted by a cad who swears he saw her leaving a drug palace in Paris. Globetrotting but near penniless Barry Wilding defends her honor, but the mysterious blonde won’t reveal her name. Barry runs into his old friend Tom while in Jolly Olde England, a detective on the trail of a murderer. Meanwhile, someone slips a piece of paper under Barry’s door, summoning him to a barrister’s office.

The lawyer informs Barry he’s inherited his late uncle’s estate, which consists of $50,000 and a mansion called The Hawk’s Nest. When he arrives there, he finds people already living on the property, including that mysterious blonde! Her father insists he leave the premises, and the girl appears the next day at his hotel, telling him her name’s Julie Kenmore, and pleads to stay at The Hawk’s Nest for six months. Barry agrees, and she tells him he must keep away… fat chance of that happening! The smitten Barry keeps coming back, and gets enmeshed in sinister doings out of his control…

Leslie Fenton  (Barry) is good, but his acting career never really took off; he later had more success as  a director. Muriel Evans (Julie) is appealing, but she never quite made the leap to stardom, either. Sidney Blackmer (Tom) had a long career as a character actor, Noel Madison , featured in many a 30’s gangster picture, plays a crook called Three Fingers Dan, Morgan Wallace (Julie’s dad) is best known as the perverted jailer in SAFE IN HELL   and the man demanding his “kumquats” in W.C. Fields’ IT’S A GIFT , and Western sidekick Syd Saylor offers up some comic relief as one of the hoods.

Chesterfield Pictures was formed in 1925, and had a ten-year run making movies for the bottom half of double bills until being absorbed (along with some other indies) into Herbert J. Yates’ mega-indie Republic Pictures. Their films featured stars on their way up (Betty Grable, Myrna Loy) and their way down (Betty Compson, Erich Von Stroheim), and competent directors like Phil Rosen, Frank R. Strayer, Richard Thorpe, and John Ford’s brother Francis. HOUSE OF SECRETS was helmed by Chesterfield workhorse Roland D. Reed, who later became a producer of early TV (BEAULAH, ROCKY JONES – SPACE RANGER, MY LITTLE MARGIE). Like I said, the movie’s no classic: the production values are extremely low, the photography murky in spots, and it can be slow going during those dreaded exposition scenes. But all in all, it’s a likeable little ‘B’ that managed to hold my interest until the very end.