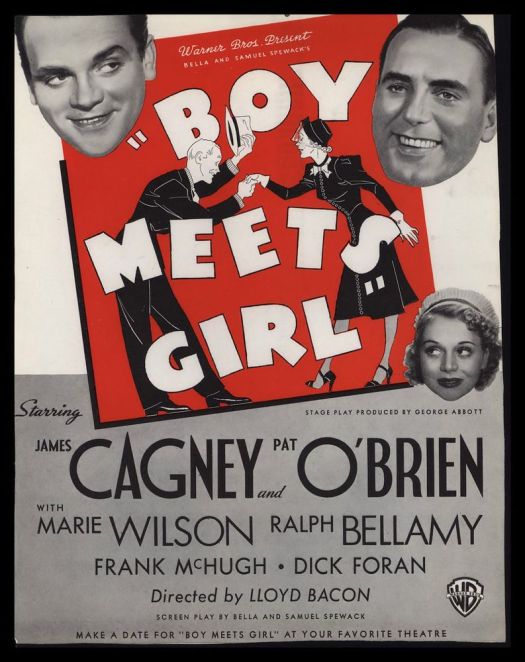 Tomorrow’s the day when everybody’s Irish, and America celebrates St. Patrick’s Day! The green beer will flow and copious amounts of Jameson will be consumed,  the corned beef and cabbage will be piled high, and “Danny Boy” will be sung by drunks in every pub across the land. Come Monday, offices everywhere will be unproductive, as all you amateur Irishmen will be nursing hangovers of Emerald Isle proportions. They say laughter is the best medicine, so my suggestion is to start your workday watching an underrated screwball comedy called BOY MEETS GIRL, starring James Cagney and Pat O’Brien, both members in good standing of “Hollywood’s Irish Mafia”! 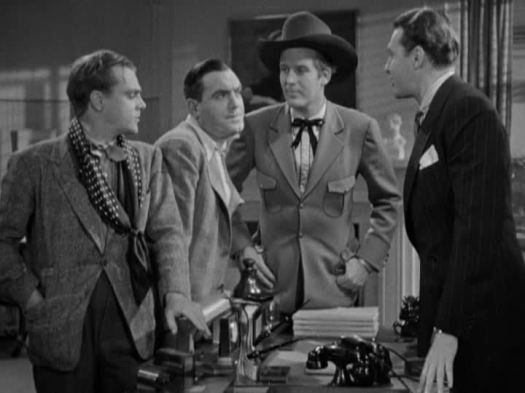 Jimmy and Pat play a pair of wacky screenwriters working for Royal Studios on a vehicle for fading cowboy star Dick Foran. Pretentious producer Ralph Bellamy has enough problems without these two jokers, as rumor has it Royal is about to be sold to a British conglomerate! While the boys verbally spar with Foran and agent Frank McHugh , commissary waitress Marie Wilson delivers food, and promptly faints. They all think she’s had an epileptic fit, but the truth is she’s pregnant, and about to give birth… right in Bellamy’s office!

The two nutty scribes get a brainstorm… they’ll costar Marie’s kid with Foran in his next picture! Cagney and O’Brien have Marie sign a contract giving them power of attorney, and little ‘Happy’ quickly becomes an eight-month-old superstar, to the chagrin of jealous Foran, who tries to woo Marie with his cowboy “charm”, but she’s fallen for extra Bruce Lester. The writers scheme to have someone go to a gala premiere posing as Happy’s dad, and central casting sends them Lester. The stunt backfires, and Jimmy and Pat are fired, as is baby Happy. Is this the end for Happy, or will there be a ‘Happy’ Ending? 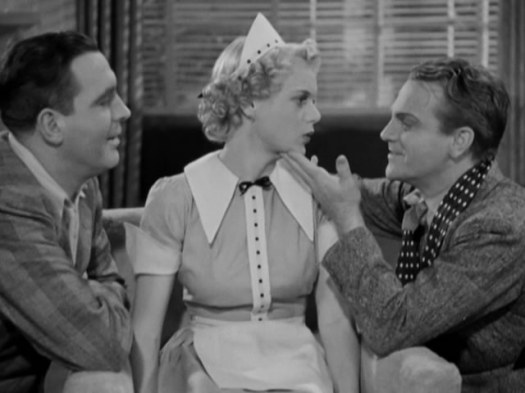 You already know the answer – this is Hollywood, there’s always a happy ending! BOY MEETS GIRL is fast and frenetic fun, with Cagney and O’Brien cutting loose from their usual dramatics and having a grand old time. The two (take a deep breath) talksofastattimesitshardtounderstandthem, and the pace is downright exhausting! Marie Wilson almost steals the show as the dizzy mom, warming up for her later role as Irma Peterson on MY FRIEND IRMA, whom she portrayed on radio, television, and a pair of movies that introduced the world to Dean Martin and Jerry Lewis. And Foran’s a revelation, spoofing his cowboy star image as the self-centered sagebrush idol.

Fellow ‘Irish Mafia’ members Bellamy and McHugh are also funny in their respective roles, as is Bruce Lester, who had good parts in IF I WERE KING, PRIDE AND PREJUDICE, and THE LETTER. Harry Seymour and Bert Hanlon play a pair of decidedly non-Irish songwriters, Penny Singleton shows up briefly as a manicurist, young Ronald Reagan is the flustered  radio announcer at the movie premiere, and Curt Bois, Carole Landis, Peggy Moran (Foran’s future THE MUMMY’S HAND costar), John Ridgley, and James Stephenson appear in bits.

Screenwriters Bella and Samuel Spewack adapted their hit Broadway play, peppering it with plenty of Hollywood in-jokes, and director Lloyd Bacon keeps things zipping along. Cagney and O’Brien’s characters are loosely based on Ben Hecht and Charles MacArthur, while Bellamy’s producer is modeled after Daryl F. Zanuck. There’s a hilarious faux trailer for Happy’s latest hit movie GOLDEN NUGGET, and the movie playing at the  premiere is an Errol Flynn epic called THE WHITE RAJAH… which was actually the title of a script Flynn wrote himself that Warners rejected as being unfilmable! 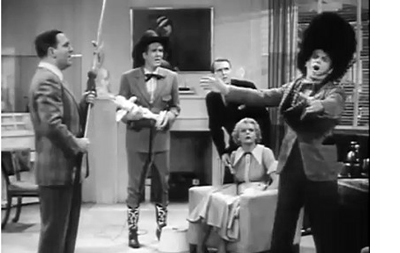 So hoist those glasses of Guinness high tomorrow, boyos! And before you  load up on black coffee and greasy food or decide to indulge in some “hair of the dog” Monday morning, watch BOY MEETS GIRL instead. It probably won’t  cure your hangover, but you’ll be too busy laughing to notice!