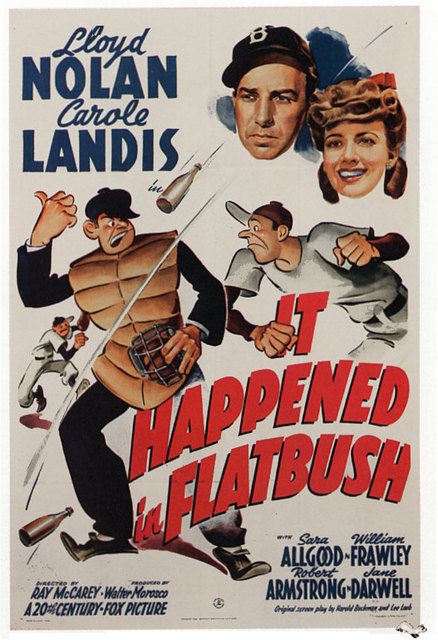 Major League Baseball’s Opening Day has finally arrived! It’s a tradition as American as Apple Pie, and so is IT HAPPENED IN FLATBUSH, a baseball movie about a lousy team in Brooklyn whose new manager takes them to the top of the heap. The team’s not explicitly called the Dodgers and the manager’s not named Leo Durocher, but their improbable 1941 pennant winning season is exactly what inspired this charmingly nostalgic little movie.

When Brooklyn’s manager quits the team, dowager team owner Mrs. McAvoy seeks out ex-player Frank Maguire, who seven years earlier was run out of town when an unfortunate error cost the team the pennant. She finds him running a club out in the sticks, and convinces him to come back to the Big Leagues. He does, bringing along his faithful bat boy/sidekick ‘Squint’, and just before the season’s about to begin, Mrs. McAvoy abruptly dies. Her family members, led by majority owning niece Kathryn Baker, know absolutely nothing about baseball and want to sell, but Frank woos and wins Kathryn over.

Ownership spends big money to bring in new players, and the Brooklyn nine go on an incredible hot streak. But when Frank stands Kathryn up on a date to accept a speaking engagement, their romance hits a bump. Further turmoil is caused when Frank starts his rookie phenom pitcher in a crucial game, and the rook gets shellacked. Poison pen sports columnist Danny Mitchell, who led the charge to run Frank out of town all those years ago, dips his venomous pen in ink once again, and things fall apart, with the players petitioning to have Frank removed. Will Frank and Kathryn get back together? Will Brooklyn rally and win the pennant? Will there be a happy ending? (I know, silly questions, right?!)

The criminally underrated Lloyd Nolan is convincing as baseball lifer Frank Maguire, and gives a passionate performance. Carole Landis also shines as socialite Kathryn, and the two have good screen chemistry. They made one other film together, the WWII drama MANILA CALLING, and it’s a shame they didn’t make more. Sara Allgood’s role of feisty Mrs. McAvoy is brief but memorable, Robert Armstrong plays the hissable columnist, William Frawley the sarcastic Brooklyn GM, Scotty Beckett the irrepressible ‘Squint’, Jane Darwell is Nolan’s Irish mum, and there’s more Familiar Faces than you can wave a bat at: James Burke, Gino Corrado, Mary Gordon, Matt McHugh, Jed Prouty, and many, many more.

Dodgers vs Reds at Ebbets Field: Umpire George Magerkurth takes a pummeling from overwrought Brooklyn Dodgers fan Frank Germano who objected to some of his calls. (Photo by Hank Olen/NY Daily News Archive via Getty Images)My favorite scene is based on a true-life incident that occurred during the Brooklyn Dodgers’ 1940 season, as Nolan goes out to argue with the umpire over a bad call, and a fan runs out of the stands, slugging the ump and causing a riot! Actual footage of the incident is spliced into the scene, and a courtroom coda features Nolan giving an impassioned, patriotic plea on the fan’s behalf (gotta get that WWII angle in the film somehow!). Director Ray McCarey handles the material well; like his more successful, Oscar-winning older brother Leo McCarey, Ray got his start at the Hal Roach fun factory, directing Our Gang and Laurel & Hardy shorts. He guided The Three Stooges in two of their best at Columbia, the Oscar-nominated MEN IN BLACK and the football spoof THREE LITTLE PIGSKINS (featuring a young Lucille Ball), and though his feature film career consists mainly of little ‘B’ films like IT HAPPENED IN FLATBUSH, his body of work deserves to be rediscovered.

So grab your peanuts and Cracker Jacks, the frosty beverage of your choice, and get ready, because baseball season has begun at last! Let’s root, root, root for the home team, and you know what’s coming next, right?…

4 Replies to “The Great American Pastime: IT HAPPENED IN FLATBUSH (20th Century-Fox 1942)”