Film noir buffs usually point to 1940’s STRANGER ON THE THIRD FLOOR as the first of the genre. Others cite 1941’s THE MALTESE FALCON as the film that launched the movement. But a case could certainly be made for William Wyler’s THE LETTER, released three months after STRANGER, but containing all the elements of what would be come to called film noir by future movie buffs. THE LETTER also features a bravura performance by Miss Bette Davis , who was born on this date in 1905, as one hell of a femme fatale.

The movie starts off with a bang (literally) as Bette’s character Leslie Crosbie emerges from her Malaysian plantation home pumping six slugs into Geoff Hammond under a moonlit night sky. The native workers are sent to fetch Leslie’s husband, rubber plantation supervisor Robert, from the fields. He brings along their attorney Howard Joyce, and it’s a good thing he does, as Leslie is booked on a murder charge and transported to Singapore to await trial.

Leslie’s story is that Hammond “tried to make love to me and I shot him” (in other words, a rape attempt), and her story never deviates, not even once, raising suspicion in the veteran barrister’s mind. That suspicion heightens when Joyce’s assistant Ong tells him he has knowledge of a letter proving Leslie’s statement is “not in every respect accurate”, written by Leslie herself. The incriminating letter in question is in the possession of Hammond’s Eurasian widow.

Leslie asks Joyce to take the money from Robert’s hard-earned savings and purchase said letter. He retrieves the letter in Singapore’s dark Chinese Quarter, and Leslie pleads with Joyce to suppress the evidence in order to vindicate her. Against his better judgement, he does so, and a not guilty verdict is found, but when the truth is finally revealed about Leslie’s relationship with Hammond, it proves devastating to all concerned…

The noir themes are all there – murder, crime, adultery, prejudice, and an overall sense of impending doom. Director Wyler was born in Alsace (now eastern France) in 1902, and certainly must have viewed the German Expressionistic films of the period as a youth. He came to America in 1921 at the behest of his mother’s cousin, Universal honcho Carl Laemmle, and worked his way up from “swing gang” member to director.

Though adept at virtually every film genre there is, many of his works have that dark touch of noir to them – DEAD END, WUTHERING HEIGHTS, DETECTIVE STORY, THE DESPERATE HOURS, and his later, underrated psychological horror THE COLLECTOR. The repeated shadowy stripe motif represents the prison these characters have all made for themselves, but the  standout scene for me was when Joyce visits the dark, mysterious Chinese section of town to purchase the letter, and that entrance by the Dragon Lady-looking Mrs. Hammond (Gale Sondergaard), a tense, gripping masterpiece of a moment (and is Willie Fung as the antique shop owner smoking an opium pipe there?). 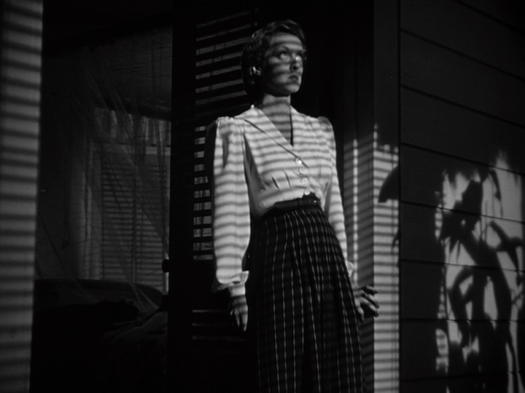 Wyler was Bette’s favorite director, appearing in three films for him, and receiving Oscar nominations for them all (winning her second for 1938’s JEZEBEL). She dominates every scene she’s in, from her blazing entrance to the fatal final moment, and gives an Oscar worthy performance, though she lost to Ginger Rogers for KITTY FOYLE (there was some tough competition that year – besides Ginger, Bette was also up against Katherine Hepburn for THE PHILADELPHIA STORY, Joan Fontaine for REBECCA , and Martha Scott for OUR TOWN). Bette’s superb supporting cast includes Herbert Marshall as the cuckolded husband, James Stephenson in his Oscar nominated  performance as lawyer Joyce, (Victor) Sen Yung as the go-between Ong, and of course the aforementioned Sondergaard as the wronged Mrs. Hammond. 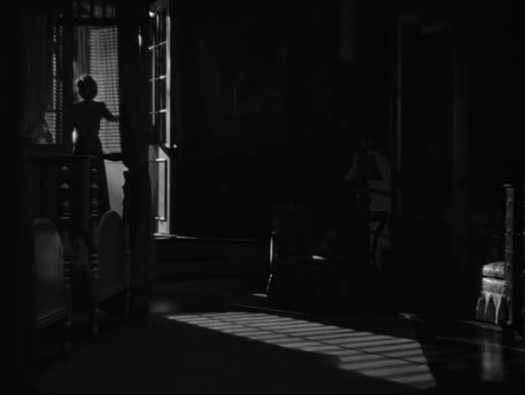 Though Davis was elated to be reteamed with Wyler, she must have been rapturous to learn the source material was a play by Somerset Maugham, whose story OF HUMAN BONDAGE put her on the Hollywood map back in 1934. Once on that map, Bette never left, and her remarkable film career spanned an incredible 58 years, with more classics than clunkers (although there were a few). And by the way, the line “Petah, Petah, give me the lettah, Petah”, done to death by Bette Davis impersonators forever, never appears in THE LETTER. There’s not even in “Petah” to be found in the movie! What you will find is a grim tale of forbidden love gone wrong, made by one of Hollywood’s masters and starring one of the brightest superstars in Hollywood history.