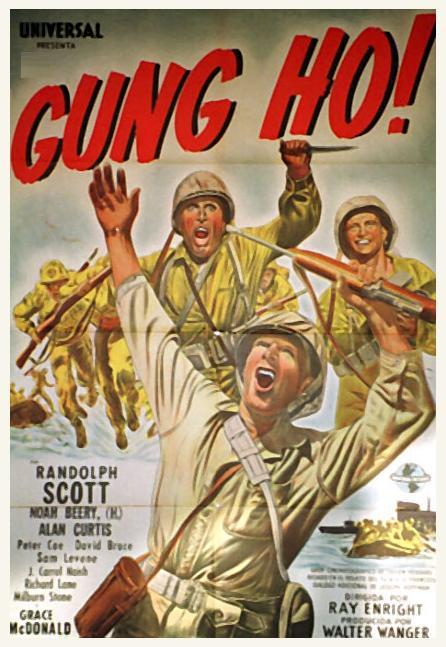 Duke Wayne wasn’t the only movie cowboy who fought WWII in Hollywood. Randolph Scott battled fascism in quite a few war dramas, and one of his best is 1943’s GUNG HO! (currently streaming on The Film Detective ). The rock-solid Mr. Scott plays tough-as-nails Col. Thorwald, an expert in guerilla warfare thanks to his experience with the Chinese army, who whips a diverse crew of Marines into fighting shape to launch the first American ground offensive against the Japanese on Makin Island.

Scott and his second-in-command, the versatile character actor J. Carrol Naish (playing a Marine of Greek descent this time around), gather up a motley crew of misfits and reprobates ala THE DIRTY DOZEN:  there’s battling stepbrothers Noah Beery Jr. and David Bruce (who’re also rivals for the affections of pretty Grace McDonald in a subplot), hillbilly farmboy Rod Cameron, murderous minister Alan Curtis , “no good kid” Harold Landon (from Brooklyn, of course!), hustler Sam Levene , and most notably a young Robert Mitchum as a scrappy ex-boxer with the moniker ‘Pig Iron’. A shirtless Bob made the bobbysoxers swoon, and he was soon cast in a series of ‘B’ Westerns at RKO, then scored big two years later in another war flick, THE STORY OF G.I. JOE , leading to superstardom and screen immortality.

There’s plenty of blazing combat action, and the violence is quite brutal for the era, but we were at war, and War is Hell. Director Ray Enright handles it all well, with plenty of help from some of Universal’s best: DP Milton Krasner, editor Milton Carruth, composer Frank Skinner, and special effects wizard John P. Fulton . Lucien Hubbard and Joseph Hoffman’s script was based on the first-hand account by Lt. W.S. LeFrancois, first published in The Saturday Evening Post. Besides those previously mentioned, other Familiar Faces to film fans include Irving Bacon (in a funny bit as a soda jerk), Peter Coe , Dudley Dickerson, Louis-Jean Heydt, Robert Kent, Richard Lane, Walter Sande, and Milburn Stone. Those of *ahem* a certain age will recognize the voice of newscaster Chet Huntley narrating the proceedings.

Modern day viewers may cringe at some of the blatant racist epitaphs hurled towards the Japanese (“I wanna kill Japs”, “I just don’t like Japs”), but once again I need to remind you of historical context. Pearl Harbor was still fresh in America’s collective mind, and retaliation was demanded. The real raid on Makin Island was the first strike, led by Lt. Col. Evans Carlson and his second-in-command James Roosevelt (FDR’s son). The 2nd Raider Battalion was transported by submarine to the Japanese stronghold, and the bloody two day battle resulted in the destruction of Japan’s garrison, with 46 verified enemy kills. The Americans weren’t spared either: 28 dead (including nine who were captured and later executed), 17 wounded, and 3 MIA. Today we honor those who sacrificed their lives on Makin Island and in other battles for the cause of freedom. Before you eat those hot dogs or bask on the beach, remember them in your thoughts and prayers.