Reincarnation and past lives were popular themes in the 1950’s, mainly because of the success of THE SEARCH FOR BRIDEY MURPHY, which spawned a host of imitators. One of these was THE BRIDE AND THE BEAST, a bizarre take on the theme written by the legendary (for all the wrong reasons!) Edward D. Wood, Jr. In this incarnation of the reincarnation subject, we find a pretty young bride who improbably discovers she was once a fierce jungle gorilla!

Big Game Hunter Lance Fuller and his new wife Charlotte Austin are honeymooning at his stately manor. She finds out he’s keeping a gorilla named Spanky in the basement to be shipped to a zoo, and gets a ‘sinister urge’ (sorry!) to see it. Charlotte goes ape over Spanky, and he obviously digs her, too. But worried Lance warns her to keep her paws off the big ape because he’s dangerous.

Later that night, Spanky escapes his cage and fondles our young bride, ripping off her nightie, so jealous Lance shoots the hairy horndog! Charlotte keeps having dreams about Africa, and can’t shake the feeling she’s lived before, so an eminent psychologist (and really, is there any other kind in these movies?) is called in to hypnotize her. Under hypnosis, Charlotte rambles on about one of Ed Wood’s favorite subjects, angora fur: “so soft like a kitten’s fur… it felt so good on me, as if it belonged there”. Ahem, okay…

The couple head to The Dark Continent so Lance can bag some big game, with their faithful houseboy/guide Taro (who speaks in a stilted Brooklyn accent!) in tow. Lance goes traipsing off among the stock footage of wild animals, while Charlotte discovers the animals fear her – because she was once Queen of the Gorillas! And by the way, do Great White Hunters usually change into their pajamas while sleeping in their jungle tents, or wear their sneakers when traversing the jungle veldt (asking for a friend)? Anyway, some Indian tigers have escaped from a cargo ship and are on the loose, attacking Charlotte before Lance kills them, and while she’s recuperating, she somehow (don’t ask me how!) summons a gorilla into camp, and the beast KO’s Lance and carries Charlotte off into the jungle where she belongs!

Yep, that’s definitely an Ed Wood story, all right! But Ed didn’t direct THE BRIDE AND THE BEAST – that honor went to producer Adrian Weiss, in his only time sitting in the director’s chair (he’d been working as a writer, editor, production manager, and assistant director since the 1930’s). Weiss isn’t bad, but I would’ve loved to have seen what Ed Wood could have done with a slightly larger budget than usual. Not much larger, mind you, but at least the sets don’t look like they’ll come crashing down on the actor’s heads at any given moment!!

Star Lance Fuller is perhaps best known for his turn as the big-foreheaded alien Brack in THIS ISLAND EARTH, played in CATTLE QUEEN OF MONTANA with Barbara Stanwyck and Ronald Reagan, costarred in Roger Corman’s APACHE WOMEN, and was once married to blonde bombshell Joi Lansing. Pretty Charlotte Austin should have had a bigger career, but besides small parts in DADDY LONG LEGS and HOW TO BE VERY VERY POPULAR, and a bigger one in Frankenstein 1970 , she went nowhere. A pair of Hollywood’s top gorilla-suited actors are featured here: Ray “Crash” Corrigan and Steve Calvert . 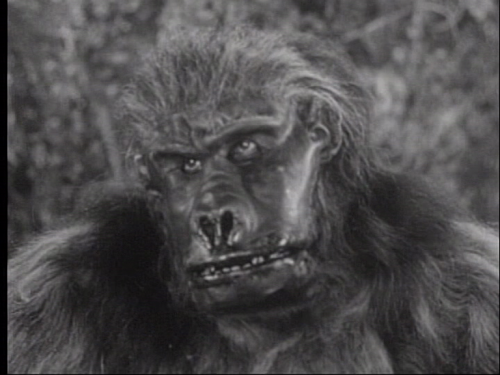 So while THE BRIDE AND THE BEAST may be silly, it’s perfect Saturday matinee fare, and kids of all ages will go ape over it, as will all you Ed Wood completists out there – and count me among them! I’d never seen it before, but now it’s available all this month on The Film Detective, and if you aren’t familiar with them yet, just follow this link… and tell ’em Cracked Rear Viewer sent you!

7 Replies to “Jungle Boogie: Ed Wood’s THE BRIDE AND THE BEAST (Allied Artists 1958)”