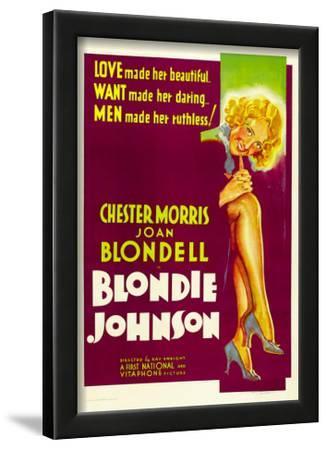 There are many contenders for the crown Queen of Pre-Code – Jean Harlow, Miriam Hopkins, Barbara Stanwyck, Mae West, and a slew of other dames – but there’s only one Joan Blondell! Rose Joan Blondell was “born in a trunk” (as they say) to vaudevillian parents on August 30, 1906, and made her stage debut at the tender age of four months. Little Joanie took to show biz like a duck to water, and worked her way up to Broadway, costarring with a young actor named James Cagney in 1930’s PENNY ARCADE; the pair went to Hollywood for the film version, retitled SINNERS’ HOLIDAY, their first of seven screen teamings.

Our Girl Joanie struck a chord with Depression Era audiences: she was a tough, wisecracking, fast-talking, been-around-the-block tomato whose tough-as-leather veneer cloaked a heart of gold. Joan and Glenda Farrell had ’em rolling in the aisles as a pair of Gold Digging Dames in nine movies, and she more than held her own with screen tough guys Cagney, Edward G. Robinson, and their ilk. In BLONDIE JOHNSON, Joan plays no mere gangster’s moll, but a full-fledged Queen of the Rackets in a fast-paced outing directed by Warner workhorse Ray Enright , opposite another movie tough guy, Chester Morris. 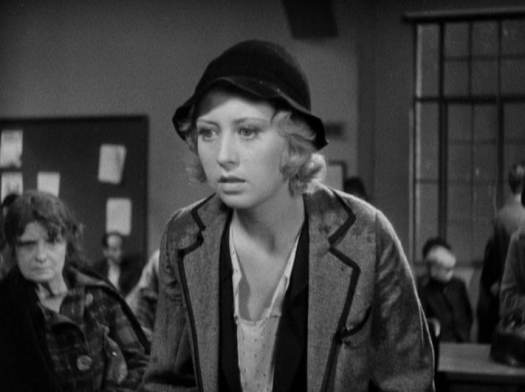 We meet Blondie at the Welfare and Relief Office looking for help. It’s the midst of the Depression, and she hasn’t worked in four months (“The boss wouldn’t let me alone”). Blondie and her sick mom are living in the back of a drug store, and when the old lady dies of pneumonia, Blondie vows not to go down to poverty: “I’m gonna get money and I’m gonna get plenty of it!”. She works up a sob-story racket with cabbie friend Red (Sterling Holloway), and her first victim is the somewhat dimwitted, gum chomping Danny (Morris), right hand man to racket boss Maxie (Arthur Vinton).

Danny gets wise, but Blondie comes up with a scheme to get fellow hood Louie (Allen Jenkins) off on charges – by pretending to be his pregnant fiance, playing on the jury’s sympathy! She then uses Danny to move up in rank, and when Maxie’s rubbed out in a rat-a-tat hail of machine gun fire, Blondie’s in charge. Danny tries to get Blondie out of the way so he can marry rich actress Gladys (Calire Dodd), but Blondie’s way too smart for him, and Danny finds himself outside looking in. Later, the boys think Danny’s turned squealer and decide to pay him a visit without Blondie’s okay…

Joan is dynamite as Blondie, and Depression audiences must’ve sympathized with her portrayal of a woman who, abused and abandoned by the system, strikes out on her own to take what she needs… and then some! Blondie’s all business, no time for cut-rate romances, and she concentrates on stealing everything in sight… including the movie! Joan and Chester have some pretty good chemistry here, with some crackling hard-boiled dialog by screenwriter Earl Baldwin (DOCTOR X, WILD BOYS OF THE ROAD, BROTHER ORCHID). The supporting cast is top-shelf, and besides those Familiar Faces I’ve already mentioned, you’ll spot Mae Busch (who’a a real hoot as a gangland gal), Joseph Cawthorn, Earle Foxe, Olin Howland, Eddie Kane, Tom Kennedy, Charles Lane, Sam McDaniel, and Toshia Mori (fresh off her success in THE BITTER TEA OF GENERAL YEN).

Joan Blondell’s a lot of fun to watch in BLONDIE JOHNSON, and she continued to be for another 46 years of screen and TV appearances. Always brassy, always sassy, and never bashful, Joan torched the screen in whatever era she acted in, but it’s her Pre-Code catalog we’ll forever cherish. Whenever this tough-talking dame comes into the picture, film lover’s know they’ll be getting their money’s worth!