Universal Pictures kicked off the horror trend of the early 30’s with DRACULA and FRANKENSTEIN , and soon every studio in Hollywood, both major and minor, jumped on the terror train. Paramount was the first to hop on board with an adaptation of Stevenson’s DR. JEKYLL & MR. HYDE , earning Fredric March an Oscar for his dual role. Soon there was DR. X (Warners), THE MOST DANGEROUS GAME (RKO), FREAKS and THE MASK OF FU MANCHU (both MGM), and THE MONSTER WALKS and WHITE ZOMBIE from the indies. Paramount released ISLAND OF LOST SOULS at the end of 1932, a film so shocking and perverse it was banned in Britain for over a quarter century, and still manages to frighten even the most jaded of horror fans today.

Based on the novel The Island of Dr. Moreau by H.G. Wells, the film begins with shipwrecked Edward Parker being rescued by The Covena, a cargo ship carrying a freight of wild animals to the uncharted island of Dr. Moreau, located in the South Pacific. Moreau is called “a scientific genius” by his associate aboard ship, Dr. Montgomery, but though ship’s Captain Davies labels him a “grave robbing ghoul” Parker gets into an altercation with the drunken captain, who strands him on the island. As Montgomery leads Parker through the jungle to Moreau’s home, the young man notices something strange about the island natives, something he can’t quite put his finger on.

It is now we meet Dr. Moreau: a white-suited, whip-cracking, portly figure who’s beard gives him a Satanic visage. The courteous Moreau invites Parker to spend the night, and leave with Montgomery in the morning, yet he has sinister ulterior motives. Moreau is a vivisectionist who has been experimenting with “organic evolution”, turning animals into half-human monstrosities in his ‘House of Pain’. The natives Parker encountered were the results of those mad experiments, but Moreau’s had more success with Lota, half-human/half-panther, and wants to find out how much human emotion she has by introducing her to the handsome Parker, hoping perhaps they’ll mate!

When Parker finds out about Moreau’s deviant research projects, he tries to escape with Lota (not yet realizing she, too, is half-human), but they’re stopped by the Manimals. Moreau rescues the pair, cracking his whip and forcing the beasts to recite The Law (“Not to spill blood”, “Not to eat meat”). After explaining his scientific discoveries to Parker, it’s discovered the schooner has sunk, leaving Parker no alternative but to stay longer. Lota has caught feelings for Parker, and they kiss, but to Parker’s horror, he feels large panther claws digging into his back! She’s reverting back to animal state, and Moreau returns her to his ‘House of Pain’. Meanwhile, Parker’s fiance Ruth has arrived with Captain Donahue, and Moreau’s plans to mate a human with his weird creations changes… 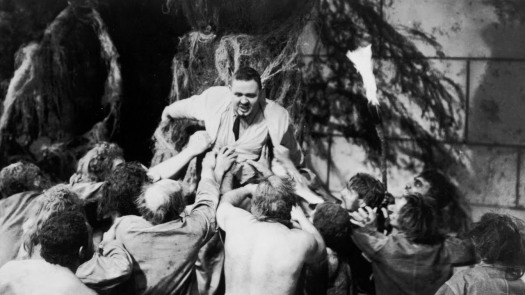 Shock follows shock in this gripping, gruesome film from director Erle C. Kenton, who began his career back in 1916. Kenton and his cinematographer Karl Struss use shadows and light to create an eerie ambiance, with that trademark Paramount early 30’s filmed-through-gauze style. Struss was well noted for shooting F.W. Murnau’s Expressionistic classic SUNRISE, and became one of the studio’s ace cinematographers. Kenton was strictly a ‘B’ director, and ISLAND OF LOST SOULS is probably his greatest film achievement. He later helmed Universal’s 40’s Monster Rallies (GHOST OF FRANKENSTEIN,  HOUSE OF FRANKENSTEIN , HOUSE OF DRACULA ) and Abbott & Costello comedies (PARDON MY SARONG, WHO DONE IT?, IT AIN’T HAY), as well as the 1948  exploitation drama BOB AND SALLY, which covered everything from abortion to alcoholism to VD in a little over an hour! 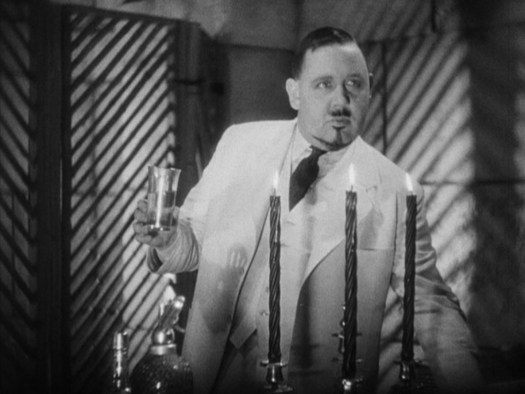 Charles Laughton  gives a bravura performance as Moreau, outwardly charming and cultivated yet harboring a deep rooted insanity. A lesser actor would’ve went over the top with a part as juicy as Moreau, but Laughton shows great restraint in bringing the mad doctor to life, even when uttering the tempting line, “Do you know what it means to feel like God?”. Laughton’s Dr. Moreau is up there in the pantheon of 1930’s horror performances, and though he’d give us more fine film roles (Henry VIII, Ruggles, Inspector Javert, Captian Bligh, Quasimodo) his Moreau remains my personal favorite.

Square jawed hero Richard Arlen has what’s probably his most unusual role of his career as Parker (except maybe his Cheshire Cat in ALICE IN WONDERLAND , but as usual he nails it. Bela Lugosi appears, almost unrecognizable except for that Hungarian voice, as the hairy-faced Sayer of the Law, leader of the Manimals. Leila Hyams isn’t given much to do as Ruth,but she’s always a welcome presence. Arthur Hohl (Montgomery), Stanely Fields (Davies), and Paul Hurst (Donahue) offer strong support.

Then there’s Lota the Panther Woman. She’s played by 19 year old Kathleen Burke, who won a talent contest in Chicago for the chance be in the film. Burke brings a savage beauty to the part, and is quite good for a novice in her first time out. Miss Burke altogether made 22 films, among them MURDERS IN THE ZOO (another horror effort, starring Lionel Atwill), LIVES OF A BENGAL LANCER (as a Russian seductress), THE LAST OUTPOST, and BOY OF THE STREETS, before retiring in 1938 and returning to Chicago. Kathleen Burke passed away in 1980.

Those half-human monstrosities were created by makeup wizard Wally Westmore and Charlie Gemora (who also appears early as a gorilla in a cage). Each and every Manimal is unique unto itself, which must have been painstaking work for the makeup department, but well worth the effort. The revolt of the Manimals against Moreau is one of the most chilling scenes in early horror history, and ISLAND OF DR. MOREAU is a bona fide horror classic that genre lovers do not want to miss.