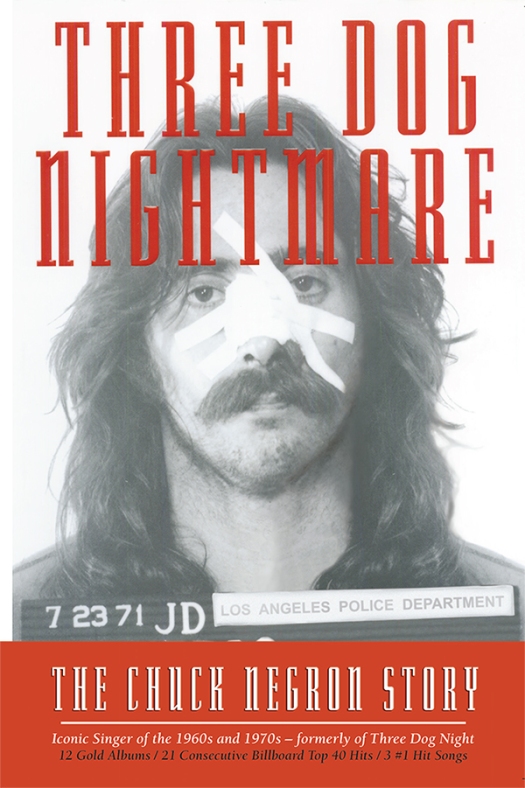 From 1969 to 1974, Three Dog Night was one of the biggest rock bands in the world, known for smash hits like “One”, “Eli’s Coming”, “Mama Told Me Not to Come”, “Shambala”, “Black & White”, and of course “Joy to the World”. Their squeaky-clean, family friendly image made them popular with both teens and adults, but behind that image lurked a deep, dark secret – co-lead singer Chuck Negron, the long-haired, mustachioed one, was an unrepentant heroin addict.

THREE DOG NIGHTMARE, first published in 1999 and revised in 2017, tells the harrowing tale of the horrors of drug addiction by the man who lived that nightmare for over twenty years. And ‘nightmare’ it truly was, as Chuck tells his tale of going from the pinnacle of the rock’n’roll universe to a Skid Row junkie, lying, cheating, and stealing his way through life leaving nothing but sorrow and devastation in his wake, callously hurting everyone who loved him (including his children) to get his next fix, and getting thrown out of the band he helped put on the charts by co-founders Danny Hutton and Cory Wells.

It’s an ugly story, and Chuck Negron himself would be the first to admit it isn’t a very likable portrait, but fortunately for him (and us) he lived to tell it, finally getting clean and sober in 1992 after over thirty attempts at detox. His story then turns into a redemption song as he tries to put back the broken pieces of his life together, remaining frozen out of Three Dog Night by Hutton and Wells, and he speaks frankly about the new addiction that gripped him in his first few years of recovery: anger, “a dubious luxury” for an addict, as AA founder Bill Wilson once coined it.

Chuck Negron finally made his peace with the world and with himself, and is now 27 years clean and sober. I’ve seen Chuck perform solo three times, including earlier this year on the ‘Happy Together’ tour (which I wrote about here at this link ). And as someone who is celebrating 16 years of personal recovery himself  today, September 7, I salute you, Chuck Negron, and I thank you for sharing your experience, strength, and hope with the world! If THREE DOG NIGHTMARE can help save just one life, the effort you put into it was well worth it.

You can purchase a copy of THREE DOG NIGHTMARE at Chuck Negron’s website ( http://www.chucknegron.com/ ) or through Amazon. Whether you’re a rock fan or a person in recovery, you won’t be disappointed. Now let’s listen to Chuck Negron and the original Three Dog Night sing their biggest hit, ‘Joy to the World” from a 1975 SOUNDSTAGE TV performance! Peace out, peeps!: