Most people these days think of Boston (and the Northeast as a whole) as a modern Athens, the standard bearer for progressive, liberal thinking. But it wasn’t always so. The City of Boston in the 1950’s and 60’s was a hotbed of racial tensions, with frequent rioting over such issues as forced busing and integration. While Jackie Robinson was the first black player to break the Major League Baseball color barrier in 1947, the Boston Red Sox (owned by avowed racist Tom Yawkey) didn’t add a player of color until 1959. That player’s name was Elijah “Pumpsie” Green.

Green was born October 27, 1933 in the small town of Boley, Oklahoma. As a youth, he excelled at sports, as did his brother Cornell, who wound up playing 13 seasons as a Defensive Back for the Dallas Cowboys. After playing college ball at Contra Costa, Pumpsie turned pro in 1954, and toiled in the minor leagues for five years before finally being called up by Boston. He made his Major League debut on July 21, 1959 as a pinch runner, and continued to play for the Sox, mostly as a second baseman, until being traded to the New York Mets for Felix Mantilla in 1963. Green played a few more seasons in the minors before hanging up his spikes in 1965. After his career ended, he worked as a high school baseball coach and truant officer in Berkeley, California, where he settled with his wife Marie. 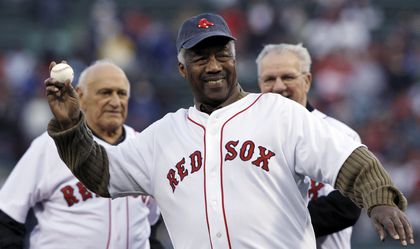 His career stats aren’t exactly Hall of Fame material – a lifetime .246 average with 13 home runs and 74 RBI in just 344 games – but as the first black player for the Red Sox, he broke the ground for future stars like George “Boomer” Scott, Jim Rice, David Ortiz, Mookie Betts, and so many others. Elijah “Pumpsie” Green died today at the ripe old age 85. He may never be a Hall of Famer, but his contribution to the game of baseball was important, and his name will live on. Job well done, Pumpsie. Rest in peace.