Philip Marlowe’s Hollywood history saw the shamus portrayed on the big screen by some very big names. Dick Powell, Humphrey Bogart, Robert Montgomery, George Montgomery, James Garner, Elliott Gould, and Robert Mitchum (twice) all played Raymond Chandler’s hard-boiled private eye at one point in their careers, with varying degrees of success. Los Angeles’ favorite detective also appeared on the small screen, and I decided to do some sleuthing and investigate the TV life of Philip Marlowe.

It was Robert Montgomery who first brought Marlowe into America’s living rooms on his anthology series ROBERT MONTGOMERY PRESENTS. But this time around, Zachary Scott played the gumshoe in a 1950 adaptation of THE BIG SLEEP. Marlowe fans would have a four year wait until he came back in another anthology, CLIMAX! hosted by William Lundigan. This time around, Dick Powell returned to the role in a 1954 telecast of THE LONG GOODBYE. There’s not a lot of info on these, and I couldn’t dig up any footage. The two programs, like many live 50’s TV shows, seem to have been lost to the sands of time.

Rugged Philip Carey starred in the 1959-60 primetime series PHILIP MARLOWE on ABC. These compact half hours feature tough dialogue and action, and while they’re not vintage Marlowe, they’re not bad. William Schallert costarred as Marlowe’s police frenemy, Lt. Manny Harris. The show only lasted one season, smoked in the ratings by the popular Red Skelton variety show. It’s available on YouTube, and here’s an episode titled “The Ugly Duckling”, with future MISSION:IMPOSSIBLE star Barbara Bain as the sexy femme fatale: 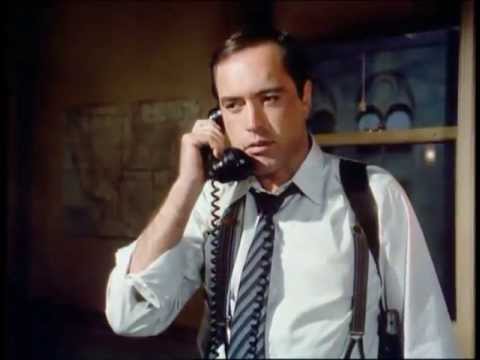 HBO brought back Chandler’s hero for two seasons in the early 80’s. PHILIP MARLOWE, PRIVATE EYE was a stylish noir series starring Powers Boothe (SOUTHERN COMFORT, RED DAWN) in mysteries based on Chandler’s original short stories. It was shown erratically, first airing in 1983, then in 1986 with a new batch of programs. It’s the best TV Marlowe I’ve seen, and Boothe is excellent as the hard luck Marlowe. It’s not in public domain, so I can’t reproduce an episode, but PHILIP MARLOWE, PRIVATE EYE is available on DVD (and many of them are on YouTube!) Definitely worth seeking out for all you Marlowe maniacs.

A PAIR OF WILD DEUCES

There were two interesting if not completely successful Marlowe productions on Showtime. The 1995 series FALLEN ANGELS featured Danny Glover as a black Marlowe in Chandler’s RED WIND. Despite the moody atmosphere and solid support from Kelly Lynch and Dan Hedaya, this attempt at a different Marlowe falls short of the mark.

Marlowe returned older but not wiser in 1998’s POODLE SPRINGS, based on an unfinished Chandler manuscript that was finished by Robert B. Parker of Spenser fame.  Parker’s PI was in the Marlowe mold, and he was the logical successor to the crown. The film starred James Caan as Marlowe, set in 1963, as he’s about to marry a rich younger woman. But Philip Marlowe can’t seem to stay out of trouble’s way. Though this one has it’s moments, it’s lesser Marlowe, despite a Tom Stoppard script and good support from Joe Don Baker, David Keith, and Nia Peeples. It’s worth a look for fans and completists.

WHERE HAVE YOU GONE, PHILIP MARLOWE?

It’s been eighteen years since we’ve seen any Marlowe action on TV. The iconic detective deserves to be resurrected by some enterprising producer, whether on broadcast, cable, or the newer subscription services. I’m sure we haven’t seen the last of Philip Marlowe on television. Somewhere in Hollywood, there’s a hard-boiled scribe with a headful of noir dreams hunched over his-or-her keyboard, banging out a script that’ll bring the Knight Errant of LA back to his days of glory. Until then, there’s a whole lot of film and television Marlowe’s out there waiting to be rediscovered. Philip Marlowe will rise again!