I’ve written about Bela Lugosi’s infamous ‘Monogram 9’ before, those ultra-cheap spectacles produced by the equally ultra-cheap Sam Katzman for low-budget Monogram Pictures. These films are all Grade Z schlock, redeemed only by Lugosi’s presence, giving his all no matter how ludicrous the scripts or cardboard the sets. BOWERY AT MIDNIGHT is a cut above; still schlock, but the pulpy premise is different from the rest, and Bela gives what’s probably his best performance out of the whole trashy bunch.

Lugosi plays kindly Karl Wagner, a benevolent soul who runs the Friendly Mission down on the Bowery. But wait – it’s all a front for recruiting down-on-their-luck criminals into Wagner’s gang of thieves. And when he’s done with them, he bumps them off and gives the corpses to ‘Doc’, a dope fiend ex-medico who uses the bodies for his own nefarious purposes!

But wait again! Wagner’s not really Wagner, he’s eminent psychology Professor Brenner, who specializes in deviant behavior! Wagner’s pretty nurse at the mission Julie Malvern has a rich Park Avenue boyfriend, Richard Dennison, a student of Brenner, who’s disdainful of Julie working with all those Bowery bums. “I want you to give up that silly job”, he scolds, “Saving humanity, it’s ridiculous!”, then later, “Go ahead and have all the fun you want, you and your social work”, as he petulantly walks out the door. Yep, Richard’s a real jerk!

Wagner/Brenner aligns himself with “dangerous killer” Frankie Mills, a young sociopath who has no qualms about doing Brenner/Wagner’s dirty work (though the split-personalited mastermind doesn’t mind murder himself, as when he tosses one of his henchmen off a rooftop to create a diversion!). Newly appointed police detective Peter Crawford is hot on Frankie’s trail, and that trail leads to the Friendly Mission, where Richard has gone undercover to spy on Judy (he thinks she’s banging Bela!!). Richard gets himself killed, the cops figure things out and bust the joint, and Wagner/Brenner hides in Doc’s secret basement, where we learn Doc’s been turning those corpses into Zombies!! The Professor gets his just desserts… but somehow Richard is de-zombified and reunited with Judy for a happy ending!

Bela tones down the bombast and plays the part of the double-life prof fairly straight. He’s damn good too, rising above the material and making the movie a memorable one (far as Monogram pics go, anyway!). He’s reunited with his DEVIL BAT costar Dave O’Brien as the cop Crawford, and though they don’t get much screen time together, it’s fun to see them briefly go at it again. DETOUR’s Tom Neal plays the psycho Frankie, pretty ‘B’ ingenue Wanda McKay is pretty Judy, and handsome ‘B’ lead John Archer the jerky Richard. Others in the cast of note are Lew Kelly as the doped-up ‘Doc’, Vince Barnett as the unfortunate hood who gets thrown off the roof by Bela, Bernard Gorcey in a funny cameo as a haberdasher, and silent stars J. Farrell MacDonald and Wheeler Oakman as (respectively) a cop and a crook.

Sure, sometimes the dialog is downright dumb, the script relies too much on coincidence, and those cardboard sets were seen in countless Monogram epics (and it’s a wonder they didn’t collapse!). And yet… BOWERY AT MIDNIGHT is a fun little film, thanks in large part to the power of Bela Lugosi, who could (and often did) make a silk purse out of a sow’s ear. It’s the best of his ‘Monogram 9’, which isn’t saying much, but think about this… movie buffs are still watching Bela’s low-budget schlock, seventy-plus years after the fact. There’s a reason for that, and his name is Bela Lugosi. 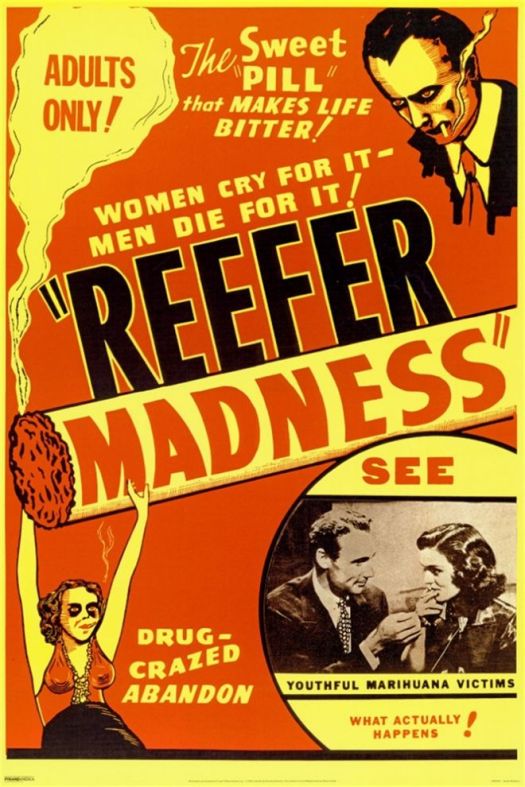 I’m writing this post while battling a nasty case of the flu, so it’s probably going to be a short one. That’s okay though, because really, what can I say about REEFER MADNESS? It’s terrible filmmaking, and dull as dishwater. There are plot holes so wide you could drive a semi through them. This little exploitation number would’ve been long forgotten after making the rounds on the grindhouse and roadshow circuits, until it was rediscovered by the stoner crowd in the 70’s and turned into an ironic midnight cult movie.

The movie itself finds stodgy Dr. Carroll lecturing the local School-Parent Group to help “stamp out this frightful assassin of youth” marijuana. He recounts what happened when some kids got hooked on the stuff. Seems this gang of drug pushers were out to corrupt American youth by turning them on at an apartment run by no-goods Mae and Jack. Sweet Mary’s brother Jimmy and her beau Bill get caught up in the sleazy goings-on at Mae’s place. Jimmy makes a run to cop more weed with Jack, but he’s so stoned he runs over a pedestrian. Bill gets involved with Blanche and ends up deflowering her while they’re both high. Mary goes looking for Bill, and is almost raped by wild-eyed stoner Ralph. Bill comes into the room and begins to throttle Ralph when Jack bursts in with a gun. There’s a scuffle, and Jack ends up shooting Mary. They convince Bill he did it, and he goes on trial. Meanwhile, Ralph freaks out about the whole thing, cracks up and beats Jack to death with a poker. The cops raid the place and Blanche spills the beans on the whole sordid situation. Bill is freed, Blanche commits suicide by jumping out a window, and Ralph is sent to a home for the criminally insane, yet another victim of the marijuana epidemic.

Director Louis Gasnier was once famous for the pioneering 1914 serial THE PERILS OF PAULINE, but had fallen on hard times, and this was his last film. The cast isn’t well-known, but does feature Dave O’Brien as the hophead Ralph, whose career I covered in my post on THE DEVIL BAT . His maniacal laughter and deranged crack-up scene are the only good things about the film. Dorothy Short (Mary) married O’Brien shortly after making the movie, and was featured in another pothead exploiter, ASSASSIN OF YOUTH. Thelma White (Mae) appeared in B-films and shorts with Edgar Kennedy and Leon Errol. Lillian Miles’ (Blanche) brief career was notable only for the 1934 Astaire/Rogers vehicle THE GAY DIVORCEE. Carleton Young (Jack) had a long film career, though; his best known are THE DAY THE EARTH STOOD STILL, FROM HERE TO ETERNITY, 20,000 LEAGUES UNDER THE SEA, and THE MAN WHO SHOT LIBERTY VALANCE. Oh, and the actor who plays the judge at Bill’s trial is Edward LeSaint. As I was watching, I thought to myself, “I’ve seen this guy somewhere before”, and I was right. He was the judge in the Three Stooges short DISORDER IN THE COURT. And since my post’s so short, why don’t we just watch Moe, Larry, and Curly in one of their best comedies, and forget about REEFER MADNESS. Enjoy!

Horror icon Bela Lugosi had some superb acting roles. Count Dracula. Murder Legendre. The broken-necked Ygor. And….Dr, Paul Caruthers in THE DEVIL BAT? What, you ask? Have I gone as looney as some of Bela’s mad scientists? I know, THE DEVIL BAT is pure hokum, with a lousy script and a ludicrous premise. But that’s my point: the only reason to watch this bottom-of-the-barrel nonsense is Lugosi’s performance. The actor,  despite all the ridiculous goings-on, gives it his all and makes the picture work.

The town of Heathville is rocked by a string of murders committed by a (yes) giant bat! Intrepid reporters Johnny Layton and shutterbug One-Shot McGuire are sent by editor Joe McGinty to investigate. The prominent Heath and Morton families have been targeted. Kindly Dr. Caruthers harbors a long-time grudge against them for making them rich at his own expense. So he creates a “devil bat”, using radiation to enlarge bats and trains them to attack. He’s invented a “shaving lotion” using a “strange Oriental fragrance” found only in Tibet that triggers the fiend to kill. The reporters get fired for rigging a phony picture of the bat (clearly marked “Made in Japan”), but stick around and solve the not-so-mysterious mystery. Caruthers is killed by his own creation, and Johnny and young Mary Heath live happily ever after. 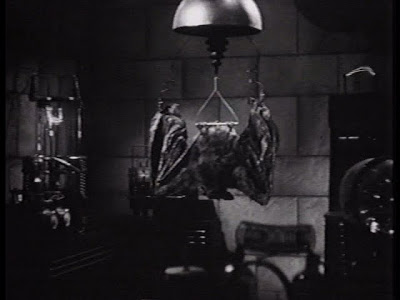 Lugosi is more restrained here than in his later Monogram vehicles, like THE APE MAN and VOODOO MAN. When he performs his soliloquy in the film’s opening scene, alone in his lab except for that goofy bat, he convinces the viewer he’s dead serious. Not easy to do when your acting partner is a rubber prop! Bela’s self-mocking voiceover, berating himself for “selling out” to the Heaths and Mortons, is well done, except for the pronouniation of “formula” as “formoola”. He gets all the best lines, too, gleefully telling victims to take the lotion and “rub it on the tender part of your neck. Soothing, isn’t it?” Listening to a radio broadcaster discredit the notion of a “devil bat”, he growls, “imbecile…bombastic ignoramus”. And of course, there’s the famous (or infamous) inflections of the words “Good-BYE” to his next victims. Bela Lugosi shows us why he was indeed a great actor. Even stuck with a lemon like THE DEVIL BAT, he manages to give us lemonade.

The rest of the cast is non-descript with a few exceptions. Dave O’Brien (Johnny) is best known as the deranged pothead in the exploitation classic REEFER MADNESS. O’Brien also portrayed CAPTAIN MIDINGHT in the Republic serial of the same name, and starred in a series of MGM Pete Smith comedy shorts. Speaking of shorts, Suzanne Kaaren (Mary) worked in three with the Three Stooges, including playing Gail Tempest in their DISORDER IN THE COURT. Miss Kaaren gained notoriety in the 1990’s when she refused to leave her rent-controlled apartment after the building was bought by one Donald J. Trump! She won the case in court (shades of Gail Tempest!) and continued living there until her death. The actor playing editor McGinty may not look familiar, but you’ll definitely recognize his voice. He’s Arthur Q.Bryan, who for decades voiced the arch-nemesis of that “wascally wabbit” Bugs Bunny, Elmer Fudd!

But it’s Lugosi’s show all the way, and he doesn’t disappoint. Getting no help from director Jean Yarborough (who had success as director of Abbott & Costello’s TV show), Bela Lugosi does wonders with an inane screenplay, lesser actors, and virtually no budget. Perhaps Bela thought doing a good job would lead to more prominent acting roles. Sadly, he spent the rest of his career toiling on Poverty Row, ending up in Ed Wood’s epics. THE DEVIL BAT is fun to watch for Bela fans, as he rises above the material once again to give another memorable performance.