I don’t think you’ll find THREE HOURS TO KILL among anyone’s Top Ten Films list, or Top Ten Westerns, or even Top Ten Dana Andrews Movies. What you will find, if you give this movie a chance, is a solid, adult themed Technicolor Western with just a hint of film noir, made by Hollywood pros in front and behind the cameras. And you can’t ask for much more than that. 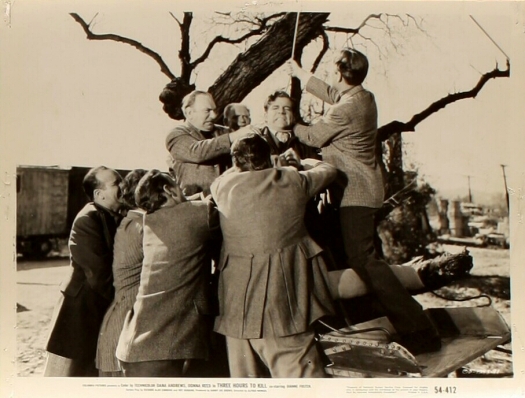 Jim Guthrie returns after a three year absence to the town that once tried to hang him. Jim relates the tale via flashback to old friend and current sheriff Ben East: a big night in town had everybody drinking and partying it up. Sexy hotel owner Chris Palmer comes on to Jim, but he only has eyes for pretty Laurie Mastin, bringing out the jealous side of banker Niles Hendricks. Laurie’s brother Carter disapproves of Jim, and a fight breaks out. The camera moves indoors as the partygoers hear two shots, then rush outside to see Jim standing over Carter, gun in hand. The alcohol-fueled crowd erupts into a lynch mob, and Jim barely escapes with his life, his rope-scarred neck a constant reminder of that fateful night.

Ben gives Jim til sundown, just three short hours away, to prove his innocence before either leaving town for good or being arrested. He soon learns many things have changed since he left. Laurie is now married to Niles and has a young son – and as it turns out, the kid is Jim’s! His probing makes him a marked man, and there are suspects galore, all with their own reasons for wanting Carter dead and Jim held responsible…

Dana Andrews  takes the role of Jim Guthrie and plays it like one of his many noir protagonists. He’s a hard man, and justice isn’t the only thing on his mind. Andrews is as obsessed and determined as his Mark McPherson in LAURA , and though his star had fallen somewhat (due to his alcoholism; Andrews eventually conquered his demons through AA), he delivers a sturdy performance. Donna Reed was a year removed from her Oscar win for FROM HERE TO ETERNITY, and the part of Laurie is a nice, juicy dramatic role for her. As always, Reed gives it her all, and the two work well together.

Producer Harry Joe Brown treats the film like one of his Randolph Scott Westerns – in fact, it probably would’ve made a good Scott vehicle! The screenplay by Richard Alan Simmons (SHIELD FOR MURDER) and Roy Huggins (future creator of TV’s THE FUGITIVE and THE ROCKFORD FILES) is tense and original. Veteran DP Charles Lawton (THE LADY FROM SHANGHAI) makes the Columbia backlot look sufficiently Western. And director Alfred Werker had been around since the silent era; working mainly in B’s, his better known films include HOUSE OF ROTHSCHILD, KIDNAPPED, THE ADVENTURES OF SHERLOCK HOLMES, REPEAT PERFORMANCE, and HE WALKED BY NIGHT. 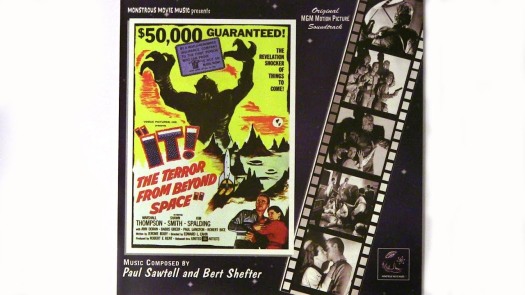 The name Paul Sawtell rarely shows up in discussions on great film composers, but if you’ve ever watched a classic-era movie, you’ve heard his work. Sawtell’s credits are legion: he worked on many Universal Horror and Sherlock Holmes films in the 40’s, moved on to RKO for some Tarzans, scored films noir like THE DEVIL THUMBS A RIDE, BORN TO KILL , T-MEN, RAW DEAL , and KANSAS CITY CONFIDENTIAL , low budget horror and sci-fi (SON OF DR. JEKYLL, THE BLACK SCORPION , IT! THE TERROR FROM BEYOND SPACE ), Irwin Allen’s THE LOST WORLD , VOYAGE TO THE BOTTOM OF THE SEA, and FIVE WEEKS IN A BALLOON, and even a couple of Russ Meyer sexploitationers (FASTER PUSSYCAT! KILL! KILL!, MOTORPSYCHO). Sawtell also composed tons of stock music cues that pop up in almost 500 films and TV shows. He’s one of Hollywood’s unsung heroes, and though he’s no Max Steiner, he deserves a shout-out – so here it is!!

THREE HOURS TO KILL is not a “classic” Western (we’re not talking John Ford here!), but the talent on both sides of the camera make it just a cut above average. It’s well worth watching, not only for Western buffs, but for fans of good, solid Hollywood filmmaking.

I watched GUN FURY expecting a surprise. What I got instead was a routine Western, not bad for its type, bolstered by a better-than-average cast, solid direction from veteran Raoul Walsh , and some lavish Technicolor location footage from Sedona, AZ. But I kept waiting and waiting for that “surprise” that never came. What am I talking about? Read on and find out, buckeroos!

Ben Warren, a peaceful Civil War vet, meets his intended bride Jennifer Ballard at the stagecoach station. The two lovebirds intend to travel to the next stop and get hitched. Also onboard the stage is mean desperado Frank Slayton, an “unreconstructed Southerner” feared across the territory, and his partner-in-crime Jess Burgess. Frank’s gang, disguised as Cavalry soldiers, lie in wait and rob the stage of it’s shipment of gold, stealing the loot killing everyone except Jennifer, who Frank has designs on and kidnaps.

But wait! Ben’s still alive, and he saddles up to search for his missing fiancé. Jess, who disapproves of Frank’s lecherous lust for Jennifer, is tied up to a fencepost by the gang and left for the buzzards. Along comes Ben, who frees Jess from his bondage, and the pair form an alliance to find Frank and his gang, Ben to rescue his true love, and Jess to settle the score with Frank…

Yup, it’s a chase Western, with the novelty of being a 3D release, which must’ve looked cool at the time, but falls flat when watching on the TV screen. The saving grace here is the impressive cast, with young Rock Hudson starring as the intense, earnest Ben, on a quest to save his ladylove. She’s played by Donna Reed , who makes for a pretty woman-in-peril (and would win the Oscar that same year for FROM HERE TO ETERNITY). Phil Carey gives a good performance as bad hombre Frank, and Leo Gordon does a fine job as Jess. Lee Marvin and Neville Brand play members of Frank’s gang, and Roberta Haynes tries hard as Frank’s Mexican squeeze Estella.

Director Walsh was responsible for some macho screen classics (WHAT PRICE GLORY, THE ROARING TWENTIES , HIGH SIERRA, WHITE HEAT ), but unfortunately GUN FURY isn’t one of them. Like I said, it’s okay for what it is, it’s just not up to Walsh’s usual high standards. The screenplay was co-written by novelist Irving Wallace, whose books THE CHAPMAN REPORT, THE MAN, and THE SEVEN MINUTES were made into films, and Roy Huggins, who later created such TV hits as MAVERICK, 77 SUNSET STRIP, THE FUGITIVE, and THE ROCKFORD FILES. The Sedonia scenery is gorgeous to look at in Technicolor, and Mischa Bakalieinikoff’s music is appropriately rousing.

I recorded GUN FURY off The Sony Channel a while back because under the “Cast and Crew” listing on my DVR was a name towards the bottom that made me want to see the film. It simply stated “James Cagney as The Villain”! Though I couldn’t find any other information, I figured the great Cagney might have done a cameo as a favor to his friend Walsh. So I sat and waited… and waited… and waited, right up until the very end. Cagney was nowhere to be found!! At least, I couldn’t find him! Why he was listed in the first place, I have no idea. So if you choose to watch GUN FURY, don’t expect any “surprise” appearance from Jimmy. Just make yourself some popcorn, sit back, and enjoy an average Western with an above-average cast.

Tomorrow’s the big night, as my New England Patriots go up against the tough defense of the Philadelphia Eagles in Super Bowl LII. Tom Brady and company will be going for Ring #6, and everyone here in Southern New England is super excited, looking forward to another victory celebration! I’ll be attending a huge party with plenty of food, big screen TV’s, raffles, squares, and like-minded fans, but before the festivities begin, let’s take a look at TROUBLE ALONG THE WAY, a football-themed film starring none other than Big John Wayne !

St. Anthony’s College is a struggling Catholic university run by sweet old Father Burke, who’s getting to be as decrepit as the school itself. The powers-that-be want to close his beloved St. Anthony’s, seeing how the school’s $170,000 in debt, but old Father Burke comes up with an idea. Citing Deuteronomy 32:15 (“The beloved grew fat and kicked”), the padre decides what St. Anthony’s needs is a winning football program, and sets about to hire a new coach.

This leads him to a pool hall, where he finds Steve Williams, a hard-drinking ex-coach, part-time bookie and ladies man banned from the sport for recruitment violations. Steve’s down on his luck, and his cheating ex-wife Ann is trying to gain custody of their daughter Carole out of pure spite. Pretty but no-nonsense child welfare officer Alice Singleton is sent to Steve’s humble hovel to investigate, and the free-spirited Steve finds himself at odds with the all-business Miss Singleton.

So Steve, needing to show gainful employment, takes Father Burke up on his offer, and he and Carole move into a room under the school’s bell tower. The elderly Burke pulls some strings with his old student, now Cardinal O’Hara, and gets St. Anthony’s scheduled against powerhouses Santa Carla, Holy Cross, Villanova, and Notre Dame. Realizing what a sorry excuse for a team he’s inherited (“You couldn’t beat Vassar at tiddlywinks!”), Steve is up to his old tricks, bringing in a bunch of ringers and wheeling and dealing his way to free equipment and a spot playing at the Polo Grounds. But resentful Ann is determined to take Steve down at any cost… 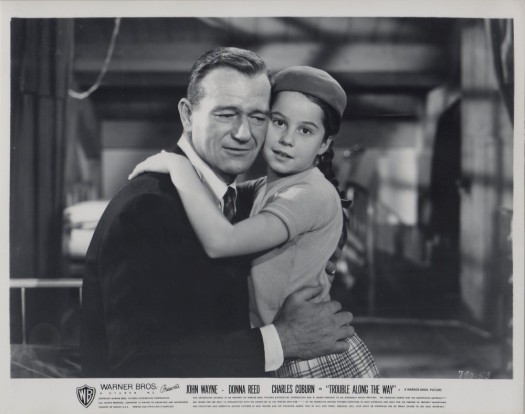 TROUBLE ALONG THE WAY is a gentle, sentimental tale with Wayne likeable as the not-so-honest but well-meaning coach. Duke knew a thing or two about football, having played for USC, and makes Steve a totally believable character. He’s a loving father to Sherry Jackson’s Carole, and the two have an undeniable chemistry (Wayne always seems to work well with kids). Jackson went on to costar in the Danny Thomas sitcom MAKE ROOM FOR DADDY, and a bunch of episodic TV and low-budget films (WILD ON THE BEACH, THE MIN-SKIRT MOB, THE MONITORS) followed.

Veteran Charles Coburn plays the warm Father Burke in his own inimitable style. Donna Reed is welfare officer Alice, and you know she’s gonna end up with Duke by film’s end. Noir dame Marie Windsor is the spiteful Ann, and the rest of the cast includes a young, crew-cutted Chuck Connors as one of Steve’s assistant coaches, Frank Ferguson, Dabbs Greer , Ned Glass, Lester Matthews , Olan Soule, and Tom Tully. Familiar Face spotters will want to keep a sharp eye out for James Dean as a spectator during the big game.

Michael Curtiz  directed from a script by Melville Shavelson and Jack Rose, with music by Max Steiner . The football scenes are well-staged, and everyone gives 110%, but despite the talents in front and behind the camera, TROUBLE ALONG THE WAY is a minor film that’s enjoyable but harmless. Those who like football and/or John Wayne will like this agreeable little entry. In fact, I know two critics who give the movie two big Thumbs Up, and they’re not Siskel & Ebert: 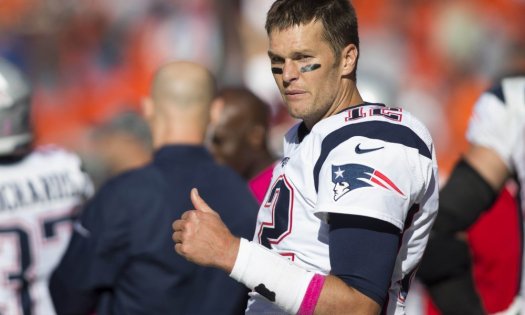 All together now: LET’S GO PATRIOTS!!