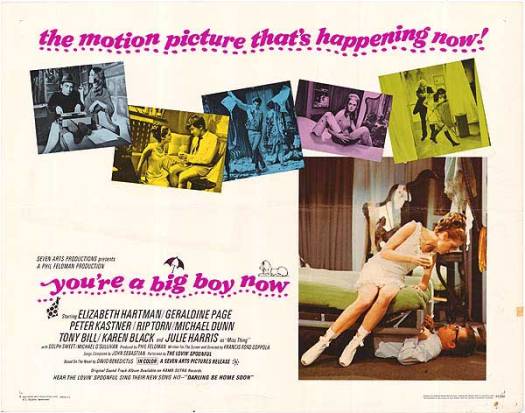 Francis Ford Coppola  was still a UCLA film student when he made YOU’RE A BIG BOY NOW, the 1966 coming of age comedy he used as his MFA thesis. The young Coppola was 27, and had gained experience working for Roger Corman ; indeed, Corman gave him his first break when he hired Coppola to write and direct the horror quickie DEMENTIA 13. But YOU’RE A BIG BOY NOW was his first major studio release, and put him on the map as a talent to keep an eye on. 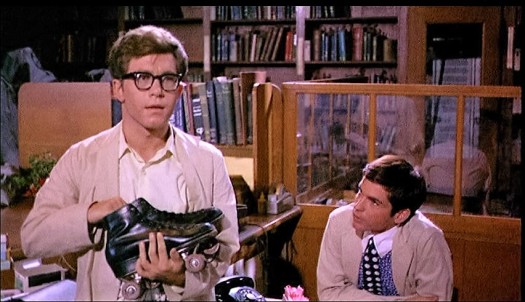 Bernard Chanticleer is a 19 year old nerd with a way-overprotective mother and disinterested, authoritarian father. He works for Dad at a New York City library, and is constantly goofing up on the job. Dad thinks it’s time for Bernard to spread his wings and move on his own, much to Mom’s displeasure. She finds him a room at a house owned by Miss Thing, who’s tenants include conservative Patrolman Graf. The house comes complete with Miss Thing’s late brother’s chicken, who’ll peck at any females coming to Bernard’s floor, making Mom extremely happy.

Co-worker Amy Partlett has a crush on Bernard, so man-of-the-world pal Raef tries to school Bernard in how to get in her pants. But Bernard only has eyes for Barbara Darling, a weirdo actress in an Off-Off-Off Broadway play. Barbara, who’s best friend is a dwarf writing her biography, reads Bernard’s gushing fan letter and decides to meet him. But little does he know his dreamgirl is a bipolar nightmare, having him move in, sexually teasing then degrading him to the point where he can’t get it up. Meanwhile, Amy’s frantic calls to the rooming house cause Miss Thing to pay a visit to Dad, winding up locked in a vault with his antique collection of erotica, and the craziness really escalates after Bernard steals Dad’s rare Gutterberg Bible and makes a mad dash through the streets of New York!

There’s no doubt this was made in the swingin’ 60’s, from the frenetic jumps cuts to the drug references (Raef slips Bernard some LSD) to the soundtrack by John Sebastian and The Lovin’ Spoonful, including the hit single “Darlin’ Be Home Soon”. We even get treated to shots of Bernard touring Times Square in it’s mid-60’s sleazy Grindhouse heyday. Editor Aram Avakian does an outstanding job putting together Copploa’s scenes, incorporating footage from the director’s DEMENTIA 13 and Corman’s THE PIT AND THE PENDULUM  for good measure.

The casting is an eclectic mix of newcomers and veterans. Canadian Peter Kastner plays Bernard as earnest yet endearingly goofy, conveying the youthful angst of a mama’s boy trying to break free. Karen Black makes her major film debut as Amy (she had a miniscule part in the 1960 exploitaioner THE PRIME TIME), and went on to a long career. Tony Bill (Raef) had been seen in COME BLOW YOUR HORN and SODLIER IN THE RAIN, later becoming a director (MY BODYGUARD, SIX WEEKS) and producer of note. Elizabeth Hartman (Barbara) had been Oscar nominated the previous year for her debut in A PATCH OF BLUE; at the time, she was the youngest (22) ever nominated for Best Actress. 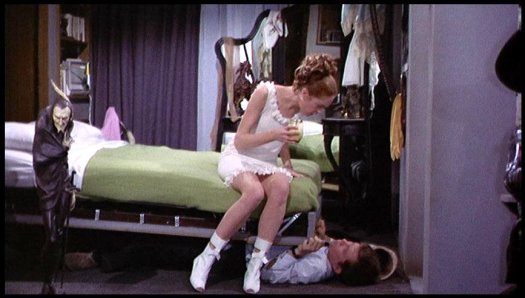 The vets include husband-and-wife team (at the time) Rip Torn and Geraldine Page as Bernard’s befuddled parents, Julie Harris as the prudish Miss Thing, Michael Dunn (THE WILD WILD WEST’s Dr. Miguelito Loveless) as Barbara’s confidant, and New York actor Dolph Sweet (later of the sitcom GIMME A BREAK) as the cop. YOU’RE A BIG BOY NOW is no GODFATHER or APOCALYPSE NOW, but Coppola fans will want to check out this early work, when the young director was just finding his voice and vision. 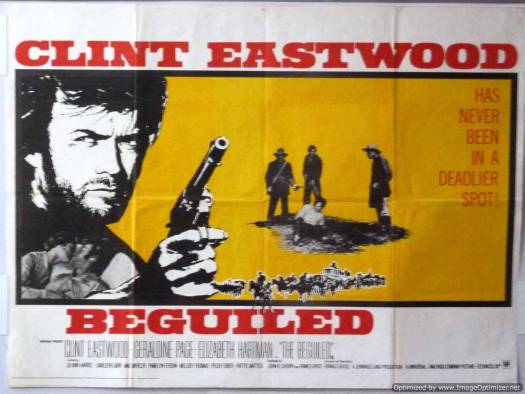 THE BEGUILED was the third of five collaborations between star Clint Eastwood and director Don Siegel. It’s definitely the most offbeat, a Gothic Western set during the Civil War. Clint plays John McBurney, a wounded, half-dead Yankee found in the woods by one of the girls from Miss Martha’s Seminary for Young Ladies. What unfolds from there is unlike anything the duo ever did before or after, a tale of sexual desire and vengeance that’s one of the most unusual entries in the Western canon.

Clint Eastwood has one of his most unsympathetic roles as McBurney. Although we feel bad about the condition he’s in, we soon realize what an amoral, manipulative scoundrel he is. Flashbacks reveal his lies about his role in the Union Army. Even as he suffers some major “misery” (hint, hint) at the hands of Miss Martha, Clint’s McBurney isn’t a likeable figure. This offbeat casting probably contributed to the film’s box office failure, as audiences were used to seeing Clint being a mythic hero rather than a flawed human being.

The ladies of THE BEGUILED all have their secrets. Miss Martha (Gerladine Page) was romantically involved with the school’s co-founder, who happened to be her brother. Edwina (Elizabeth Hartman) is a sexually repressed virgin, while Carol (JoAnn Harris) is completely uninhibited. Hallie (blues singer Mae Mercer), a slave working for the school, has been abused by white men. Doris (Darleen Carr) is a staunch supporter of the Confederacy who finds Miss Martha’s harboring of McBurney an act of treason. Then there’s young Amy (Pamelyn Ferdin), the 12-year-old woman-child who falls hard for the handsome “Mr. McB”, only to have her love turn to hate when he drunkenly kills her pet turtle, and she becomes the instrument of the women’s revenge.

Geraldine Page had a wonderful career on stage, screen ,and television, and is regarded as one of the greatest actresses of her generation. I especially enjoyed her work in HONDO, SWEET BIRD OF YOUTH, and the NIGHT GALLERY episode “The Sins of the Fathers”. Nominated for eight Oscars, Page finally won for THE TRIP TO BOUNTIFUL. Elizabeth Hartman is best remembered for A PATCH OF BLUE and WALKING TALL. Darlene Carr and JoAnn Harris were prolific TV actresses during the 70’s. Melody Thomas (Abigail) went on to a 37 year run on the soap THE YOUNG AND THE RESTLESS.

Young Pamelyn Ferdin plays Amy, the little girl who finds McBurney. The scene where 41-year-old Clint kisses 12-year-old Pamelyn to keep her quiet while the Confederate patrol passes borders on pedophilia, and made me kind of queasy. Ferdin was a child star of the 60’s-70’s who made the TV rounds (she was Felix’s daughter on THE ODD COUPLE), and voiced Lucy in three “Peanuts” specials and movies. She also known for her performance in another creepy 70’s tale, THE TOOLBOX MURDERS.

THE BEGUILED isn’t your typical Eastwood/Siegel outing, but it will hold your interest. The acting and direction are top-notch, and the atmospheric material will please fans of Westerns and horror, and is well worth viewing today. Clint and Don failed only at the box office, as fans didn’t want to watch Clint Eastwood in such an unsavory role.  They did better with their next collaboration, a little cop movie called DIRTY HARRY.  But that’s another story for another day…