Most of you know burly Harold Sakata for his role as the steel-hat-flinging Oddjob in GOLDFINGER , the third movie in the James Bond franchise. But Mr. Sakata did much more than that one iconic part. In fact, you could say that Harold Sakata wore many hats during his colorful career, and not just on the Silver Screen!

He wasn’t always known as Harold “Oddjob” Sakata, his given name being Toshiyuki Sakata. Born in Holualoa, Hawaii in 1920, Harold was raised in a large family – six brothers and four sisters! Believe it of not, as a teen he was a scrawny 113 pounds, until he took up weightlifting at age 18. Harold bulked right up, and after a stint in the Army during WWII, he became a top powerlifter, so good he made the U.S Weightlifting team at the 1948 Summer Olympic Games in London, where he won the silver medal in the light-heavyweight class by pressing 410 kg, which is more than 903 lbs! Harold also competed in bodybuilding contests, and once won the Mr. Hawaii title.

He began training to become a professional wrestler, and made his ring debut as a “good guy” in 1950. But with his 20″ neck, 50″ chest, and fearsome scowl, Harold reinvented himself as the dastardly, rule-breaking villain ‘Tosh Togo’, billed as the brother of another wrestling heel, The Great Togo. Together the pernicious pair travelled the world, winning numerous tag-team championships along the way. ‘Tosh’ also captured singles gold in Los Angeles, Texas, Puerto Rico, and his native Hawaii. During a grappling tour of Great Britain, film producers Harry Saltzman and Albert Broccoli spotted him on the telly, and thought the massive wrestler would make a great henchman in their latest James Bond epic, GOLDFINGER.

In my 2017 review, I called GOLDFINGER “the ultimate James Bond movie”, and Sakata plays a large part in making it so. He had no acting experience, but his career as a wrestling villain gave him more than enough training to play the right-hand man of Gert Frobe’s Auric Goldfinger – with no dialog, all he had to do was look menacing! It took Harold about five months to get that hat-flinging trick down pat before he finally mastered it. His “electrifying” battle with Sean Connery’s 007 is one of the series’ best, and if he had never made another movie after GOLDFINGER, his place in the James Bond Rogue’s Gallery would forever be assured.

But GOLDFINGER was just the beginning of Harold Sakata’s next career, and after roles in a trio of European movies (the German crime thriller 4 SCHLUSSER, the Spanish spy spoof BALERIC CAPER, and the French comedy SEVENTEENTH HEAVEN), he appeared in the all-star TV film THE POPPY IS ALSO A FLOWER, produced under the aegis of the United Nations, and featuring (among others) Stephen Boyd, Yul Brynner, Angie Dickinson , Rita Hayworth , Marcello Mastroianni, Gilbert Roland, Omar Sharif, and Eli Wallach in a tale about a team of international narcs out to stop the heroin pipeline in the Middle East. The movie was “based on” a story by none other than 007 creator Ian Fleming, and directed by Bond vet Terence Young.

Harold was next cast as crime boss Big Buddha in the sci-fi/spy flick DIMENSION 5, a low-budget effort starring Jeffrey Hunter and France Nuyen. He was no stranger to episodic TV either, appearing on GILLIGAN’S ISLAND in a spoof of THE MOST DANGEROUS GAME as the henchman of big-game hunter Rory Calhoun, who’s out to hunt down a man – namely Gilligan! Around this time he also showed up on variety shows like THE JERRY LEWIS SHOW and ROWAN & MARTIN’S LAUGH-IN. After appearing in the all-star bomb THE PHYNX , Sakata landed a regular role on SARGE, starring Oscar winner George Kennedy as a cop-turned-priest, with Harold as Sarge’s cook at the mission who just happens to be a martial arts expert. The series lasted but one season.

Yet Harold pressed on, landing a part in Florida filmmaker William Grefe’s 1974 horror movie IMPULSE, starring William Shatner as a serial killer of rich widows! He also played in another Grefe epic, 1976’s MAKO: THE JAWS OF DEATH, one of the first of the Spielberg rip-offs. He kept active on television too, guest starring on HAWAII 5-0, THE BLUE KNIGHT (with old pal Kennedy), QUINCY, POLICE WOMAN, and THE ROCKFORD FILES. He was also noted for starring in a series of TV commercials for Vicks Formula 44 Cough Syrup, dressed in his ‘Oddjob” get-up, as a man whose coughing fits cause destruction before he takes his dose:

Sakata parodied his TV ads on an episode of Johnny Carson’s TONIGHT SHOW, with hilarious results!:

The remainder of his film resume includes turkeys such as THE HAPPY HOOKER GOES TO WASHINGTON, DEATH DIMENSION ( an Al Adamson film featuring Jim ‘BLACK BELT JONES’ Kelly and ex-Bond George Lazenby !), GOIN’ COCONUTS (starring Donny & Marie Osmond!), and a recurring role on  the short-lived horror comedy sitcom HIGHCLIFFE MANOR. Harold Sakata died of liver cancer on July 29, 1982 in a Honolulu hospital, and though his film career wasn’t really very memorable, the man himself certainly was. He did indeed wear many hats during his colorful lifetime, from Olympic strongman to pro wrestler to iconic James Bond villain to TV pitchman, and Harold Sakata is still fondly remembered by his legions of fans – including Yours Truly! 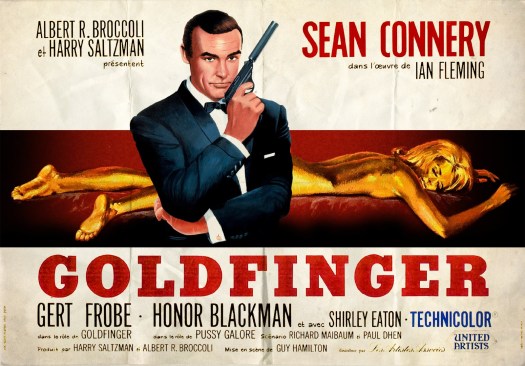 For my money, GOLDFINGER is the ultimate James Bond movie, serving as the blueprint for spy sagas to come. The action begins right off the rip as a scuba diving 007 infiltrates an oil refinery in an unnamed Latin American country, plants some plastique explosives, and changes into a tux as the whole shebang blows, then attends to some “unfinished business” with a beautiful Latina who sets him up to be killed by a bad guy, electrocuting his foe in a tub and wittily remarking “shocking, positively shocking” – all before the opening credits roll and Shirley Bassey belts out the immortal title tune by Anthony Newley and Leslie Bricusse! 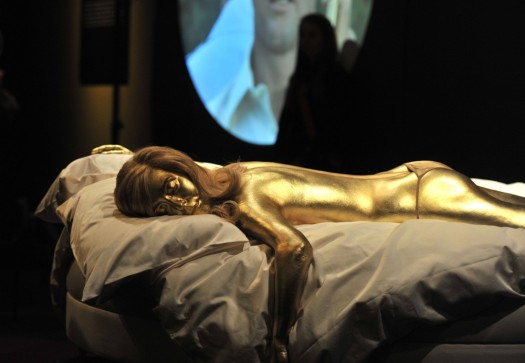 Our Man Bond is then off to Miami to meet with his CIA pal Felix Leiter. He’s put on the trail of one Auric Goldfinger, a legit gold bullion dealer suspected of illegal activities. The avaricious Goldfinger isn’t above running a card cheating scam, with sexy Jill Masterson stationed high above in a hotel window looking at the victim’s hand through binoculars. 007 breaks things up by seducing young Jill, who pays for her betrayal with her life – painted solid gold! Things have just become personal for Bond! But petty card cheating isn’t Goldfinger’s only sin. The rapacious businessman has a much more insidious scheme in mind, involving a hostile takeover of Ft. Knox, tainting the U.S. gold reserve with a nuclear device that will send the world into economic chaos and leave him the most powerful man on Earth!

Sean Connery fits the part of James Bond like that tux I mentioned earlier in his third turn as the suave secret agent. He’s placed in peril after peril yet still remains cool as a “shaken, not stirred” martini. The movie gives him some great gadgets to do his dirty work with, including a brand-new Aston Martin DB5 equipped with “modifications” like a smoke screen, oil slick, mounted machine guns, and an ejector seat that sure comes in handy! This was the first of the Bond films to utilize those wild gadgets, a trope that became a staple of later 007 epics. 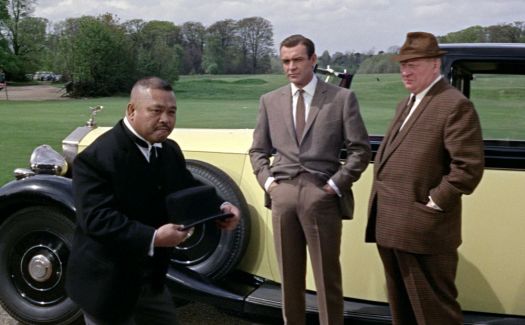 The villains here are among the most iconic in Bond history. German actor Gert Frobe is perfect as the vainglorious, gold obsessed Auric Goldfinger, whose delusions of grandeur are thwarted by 007. Frobe didn’t speak English very well, and had to be redubbed, but his imposing presence caught producer’s eyes and lead to him being cast in big budget blockbusters like THOSE MAGNIFICENT MEN IN THEIR FLYING MACHINES, IS PARIS BURING?, CHITTY CHITTY BANG BANG, and $ (DOLLARS). Harold Sakata, a professional wrestler under the ring moniker Tosh Togo, plays Goldfinger’s silent but deadly henchman Oddjob, whose steel-brimmed bowler hat launched a thousand spy-spoof parodies. Sakata, who also won a Silver Medal (sorry, no gold this time!) in weightlifting at the 1948 Olympics, went on to a long career in films and television, including a memorable ad campaign for Vicks Formula 44 cough syrup.

Then there’s Honor Blackman as the ribaldly named Pussy Galore! And the way Connery pronounces her name (“Poo-shay”) makes it sound even lewder! Honor was well-known to British TV audiences as the leather-clad partner of Patrick Macnee in THE AVENGERS (before Diana Rigg), and she makes an irresistible antagonist for Bond, switching sides after the memorable “roll in the hay” scene where she and Connery exchange judo flips. The deadly, plane piloting Pussy Galore ranks high on my list of all-time great Bond Girls! As for the other ladies here, Shirley Eaton shines (literally!) as the ill-fated Jill Masterson. Later in the film, Tania Mallet shows up as Jill’s revenge seeking sister, getting an Oddjob hat check for her troubles.

The regular Bond gang’s all here: Bernard Lee as M, Desmond Llewellyn as Q, and Lois Maxwell   as Miss Moneypenny. There are so many iconic moments in GOLDFINGER, including the laser beam scene (a variation on the old buzzsaw routine), the assault on Ft. Knox and lengthy battle with Oddjob, the crazy car chase, and of course the gold-painted beauty Jill. The movie introduced a lot of firsts to the Bond Universe, the pre-credits action, outlandish gadgets, and the initial briefing from M, not to mention having established stars sing the opening theme song, a tradition followed by pop greats like Tom Jones, Paul McCartney, Carly Simon, and Duran Duran. GOLDFINGER is the perfect place to start for anyone unfamiliar with James Bond movies (are there any still in existence?); it’s the quintessential 60’s spy flick and remains my personal favorite.

This is my contribution to the 007 Blogathon at http://maddylovesherclassicfilms.wordpress.com/2017/07/20/the-007-blogathon-begins/ 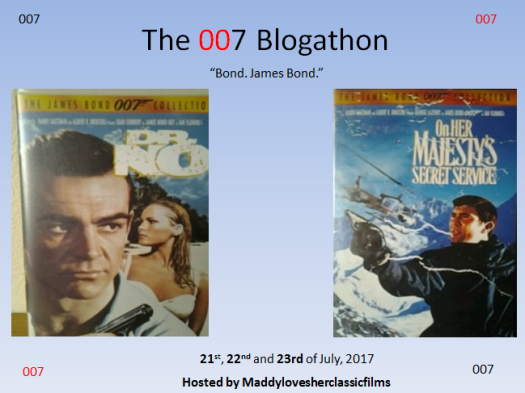