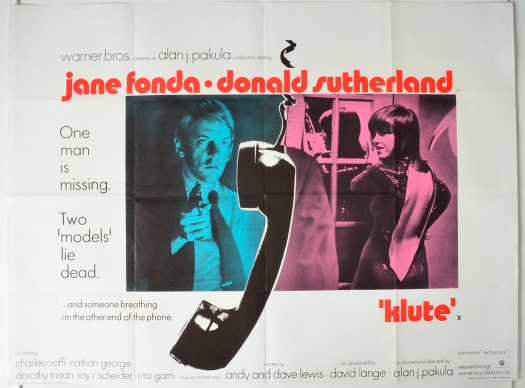 I was going to post on KLUTE last week, but between my Internet service going on the fritz and getting swept up in Oscar Fever, I never got around to it. Better late than never though, and KLUTE is definitely a film worth your time. It’s a neo-noir directed by that master of 70’s paranoia, Alan J. Pakula, who’s also responsible for THE PARALLAX VIEW, ALL THE PRESIDENT’S MEN, and SOPHIE’S CHOICE. KLUTE is both an intense thriller and character study, with an Oscar-winning performance by Jane Fonda.

PI John Klute is sent to New York City to investigate the disappearance of his friend, Tom Gruneman. Seems Gruneman has been sending obscene letters to Bree Daniels, a call girl he met there. Klute sets up shop in her apartment building, shadowing her and tapping her phone. When he finally goes to question her, Bree says she doesn’t remember Gruneman, but it’s possible he could be the guy who once beat the crap out of her. Bree takes Klute to meet her ex-boyfriend/pimp Frank, who leads them to a hooker named Arlyn Page, now a hopeless junkie. Klute thinks Arlyn may hold the key to the mystery, until she’s found dead in the river. Meanwhile, Bree has the strangest felling that Klute isn’t the only person who’s been watching her…. 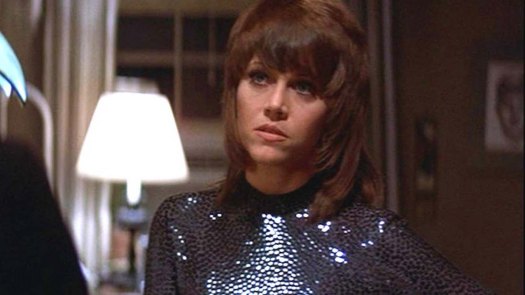 Jane Fonda won a well-deserved Oscar for her role as Bree. Tough on the outside, vulnerable on the inside, Bree’s a hot mess, only feeling empowered when she’s turning tricks, as she explains to her shrink. When she first meets Klute, she berates him (“And what’s your bag, Klute? What do you like? You like talking, a button freak?…Or maybe you like to have us wash your tinkle. Goddamned, hypocrite squares!”), but soon they sleep together, and she discovers she has feelings for him, making her extremely uncomfortable. It’s an edgy, honest performance, and Fonda nails it from beginning to end. 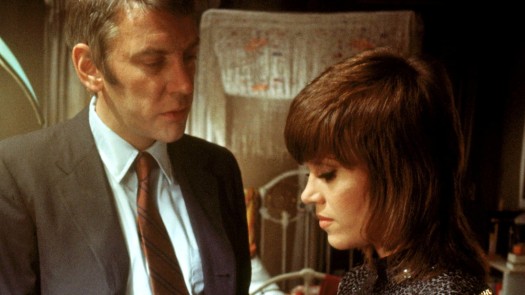 The title role is played by Donald Sutherland, and he’s Fonda’s equal here. Klute’s more introverted than Bree, and equally awkward in expressing his feelings. Sutherland underplays as John Klute, and shows why he’s one of the best actors of the era. The supporting cast is more than capable, with Roy Scheider as Bree’s slimy former pimp particularly noteworthy. Charles Cioffi contributes a creepy piece of villainy, constrained yet obviously unhinged. The criminally underrated Dorothy Tristan has a brief but memorable turn as the pathetic Arlyn. Jean Stapleton (the beloved Edith of ALL IN THE FAMILY) and Shirley Stoler (THE HONEYMOON KILLERS, SEVEN BEAUTIES) are recognizable in small parts, but if you blink you’ll miss Sylvester Stallone, Warhol superstar Candy Darling, and porn icon Harry Reems in the disco scene.

The great Gordon Willis does his usual superb job as Cinematographer, as he did with THE GODFATHER movies and his work with Woody Allen. Carl Lerner’s editing and Chris Newman’s sound add to the film’s paranoid mood. KLUTE doesn’t often get in the discussion of the classic movies of the 70’s, but it can stand right there with the best of them. The entire cast and crew combine to give KLUTE an existential sense of dread, a feeling that resonates as deeply as ever in today’s modern world.