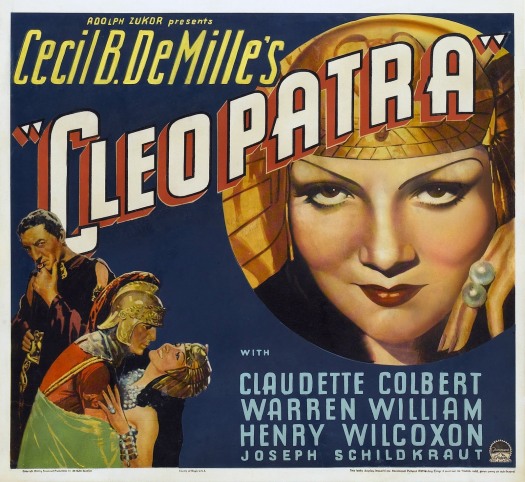 When I hear the words ‘Hollywood Epic’, the name Cecil B. DeMille immediately springs to mind. From his first film, 1914’s THE SQUAW MAN to his last, 1956’s THE TEN COMMANDMENTS, DeMille was synonymous with big, sprawling productions. The producer/director, who’s credited with almost singlehandedly inventing the language of film, made a smooth transition from silents to talkies, and his 1934 CLEOPATRA is a lavish Pre-Code spectacular featuring sex, violence, and a commanding performance by Claudette Colbert as the Queen of the Nile.

While the film’s opulent sets (by Roland Anderson and Hans Dreier) and gorgeous B&W cinematography (by Victor Milner) are stunning, all eyes will be on the beautiful, half-naked Colbert. She gives a bravura performance as Cleopatra, the ambitious, scheming Egyptian queen. She’s sensuous and seductive, wrapping both Caesar and Marc Antony around her little finger, and devious in her political machinations. If I were compare her to Elizabeth Taylor in the 1963 Joseph L. Mankeiwicz version, I’d have to give the edge to Claudette; Liz may be more voluptuous, but Claudette’s definitely a more playful, tantalizing Cleo. And as for that famous milk bath scene, well… 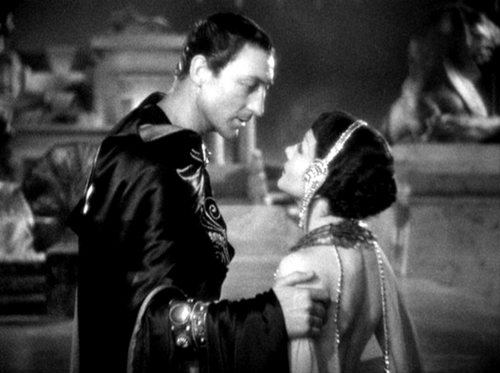 Cleo’s two lovers are both well cast, with smooth Warren William making a sturdy Julius Caesar. When her hopes to rule Rome alongside Caesar are dashed on the Ides of March, Cleo sets her sights on warrior Marc Antony, played with boyish enthusiasm by Henry Wilcoxon. She seduces him with wine, food, and her undeniable charms, gifting Antony with “clams from the sea” (in which a net is hauled up filled with writhing mermaids bearing shells filled with jewels), then celebrating with the bizarre tableau of dancing cat-women being whipped by a burly soldier! Who can resist a pitch like that!

Cecil B. DeMille certainly knew how to hold an audience’s interest. Whether it’s in the battle scenes containing much carnage (and, truth be told, much stock footage), or in all the half-naked women, the film is a visual delight, even when Claudette’s not on the screen. Nobody captured the decadence of ancient times quite like DeMille, and CLEOPATRA’s got decadence to spare, coming right before Will Hayes began his puritanical reign of terror with the Production Code. It was nominated for five Oscars (Best Picture, Assistant Director, Sound Recording, Editing), winning for Milner’s cinematography. Conspicuous by it’s absence on that list is Claudette Colbert’s performance, but I don’t think she minded; she won that same year for the screwball classic IT HAPPENED ONE NIGHT.

The 1934 CLEOPATRA is half the length of the ’63 Liz & Dick opus, and is a whole lot more fun. Cecil B. DeMille doesn’t get much attention these days, but he was unquestionably one of Hollywood’s most important figures, and this film is a great example of Pre-Code excess. I was as mesmerized by Claudette Colbert’s star turn as I was by DeMille’s epically delicious debauchery. I think you will be, too.

Swashbuckling matinee idol Tyrone Power was cast against type as a self-centered con artist who gets his comeuppance in  1947’s offbeat noir NIGHTMARE ALLEY. Power and director Edmund Goulding teamed the previous year for the hit THE RAZOR’S EDGE, and the star desperately wanted his next movie to be based on the dark novel by William Lindsay Gresham. Studio chief Darryl F. Zanuck didn’t like the idea, but since Power was 20th Century-Fox’s biggest star, he agreed to greenlight the film. Turned out Zanuck’s instincts were right: audiences rejected the handsome Power in the role of a heel, and although he received good reviews for his performance, NIGHTMARE ALLEY bombed at the box office. Today it’s regarded as one of the genre’s best, its unique backdrop and theme setting it apart from other noirs of the era.

Stan Carlisle (Power), the type of guy who could talk a cat off a fish wagon (as my grandmother used to say) loves everything about the carny life. He’s particularly fascinated by ‘The Geek’, who bites the heads off chickens and drinks their blood. Stan  works as the barker for Mlle. Zeena’s mindreading act. Zeena and husband  Pete used to work the big time until she did him wrong and Pete hit the bottle hard. Stan’s got a thing going on with Zeena, and also has the hots for Molly, who does an electric-woman act. Strongman Bruno sees through the slick-talking Stan, and is protective of the young girl.

Zeena and Pete had a secret code they used to use in their act, but Pete’s too drunk now to be able to pull it off. She’s been weaning Pete off the booze slowly so she can send him for ‘the cure’. Stan sees Pete with a bad case of the shakes, and gives him a bottle of moonshine. But he’s mixed up the bottles, and gives the old lush wood alcohol, causing Pete’s death. Stan uses the opportunity to get Zeena to teach him the code, assisted by Molly. Stan finally seduces Molly, and when the carny folks find out, they force the two to get married. But now that he has both Molly and the code, he leaves the carny for the bright lights of Chicago and bigger and better things.

The couple begin appearing at a swanky nightclub as mentalist ‘The Great Stanton’, using the code to wow audiences and  become toasts of the town. Psychologist Lilith Ritter catches the act and tries to trip him up, but Stan sees through her ruse  and turns the tables. Lilith is as big a phony as Stan, recording her patient’s sessions without their knowledge. Stan and Lilith use that knowledge to their advantage when Stan reinvents himself as a spiritual medium, bilking rich folks who long to hear from their dear departed dead ones. They set their sights on wealthy Ezra Grindle, coercing Molly into playing his dead love. Molly refuses to go along with the charade at first, telling Stan, “You’re going against God…just laughing your head off at these chumps”. Stan talks her into it, but Molly, upon seeing the elderly Grindle on his knees praying at the sight of her, blows Stan’s cover and runs. Stan knocks Grindle down and, back at their hotel, tells Molly to meet him at the train station. 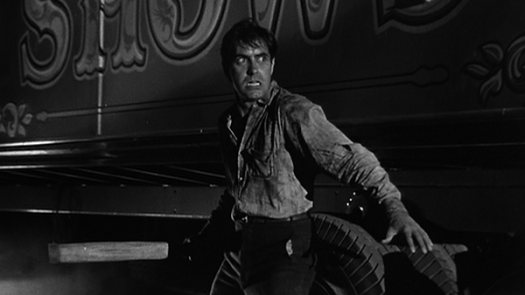 Stan goes to Lilith to get his $150,000 and flee town. But the devious psychologist rips him off (giving him a suitcase with bundles of ones), and the master con discovers he’s been conned himself. Returning to Lilith’s abode through the window, she stalls for time while the maid calls the cops. When Lilith threatens to tell the police he’s an unstable patient with wild delusions, Stan realizes he’s beat, and has to take it on the lam. He tells Molly to go back to the carny, while he hits the booze and lives in fleabitten hotels and hobo jungles. Destitute and desperate, Stan becomes a shell of his former self. Stumbling on a carny, he tries to get work, but the boss says there’s no openings for magicians or fortune tellers. There is one position available however, and alcohol soaked Stan becomes what he dreads…the carnival Geek! (“Mister, I was made for it!”‘)

This being Hollywood, the ending finds Molly at the same carny, and there’s hope for Stan. The book version is apparently much darker, with Stan resigned to his lowly fate. The Geek looms large throughout the film, as we hear his wailing and see him only in longshot, making The Geek all the more enigmatic. Edmund Goulding and DP Lee Garmes create a dark carnival indeed, and the movie reminded me a lot of Tod Browning’s FREAKS in its depiction of carny life. Goulding doesn’t get much recognition as a filmmaker, though he’s responsible for gems like LOVE (1927), GRAND HOTEL (1932), THE DAWN PATROL (1938), and DARK VICTORY (1939), as well as the aforementioned RAZOR’S EDGE. Screenwriter Jules Furthman began in the silent era, and some of his best contributions to cinema were the scripts for two Marlene Dietrich vehicles (SHANGHAI EXPRESS and BLONDE VENUS, both 1932), MUTINY ON THE BOUNTY (1935), Howard Hughes’s then-controversial THE OUTLAW (1943), and the Bogie & Bacall starrers TO HAVE AND HAVE NOT (1944) and THE BIG SLEEP (1946). His last was the John Wayne/Howard Hawks Western RIO BRAVO (1959).

Tyrone Power shows he’s more than just a pretty face as Stanton Carlisle. Whether he’s telling tales of his early life at an orphanage or pouring on the charm to his latest female conquest, we’re never sure if Stan’s telling the truth or not. Power took a big risk in taking this role, and shows great range as an actor. Coleen Gray never quite made the leap from ingénue to major star, but she’s good in the sympathetic role of Molly. Her credits include KISS OF DEATH, RED RIVER, KANSAS CITY CONFIDENTIAL (which is on my review list), Stanley Kubrick’s THE KILLING, and the underrated horror film THE LEECH WOMAN. Joan Blondell (Zeena) needs no introduction to movie fans, having been a star at Warners since the early 30’s. Blondell was one of the screen’s finest character actresses. Helen Walker (Lilith) had a promising career going when a car accident, in which a serviceman was killed, led to her being accused of drunk driving. Her films after that were few and far between. Ian Keith (Pete) is one of those actors you know but can’t quite name, usually in villainous supporting roles. Mike Mazurki (Bruno) however is well known for his long film career. The ex-wrestler played in everything from noirs (MURDER MY SWEET, NIGHT AND THE CITY) to comedies (SOME LIKE IT HOT, It’s A Mad Mad Mad Mad World), to episodes of THE MUNSTERS, GILLIGAN’S ISLAND, and THE BEVERLY HILLBILLIES, to Rod Stewart’s 1984 video “Infatuation”. NIGHTMARE ALLEY gives us a gritty look at the fringes of showbiz, where grifters and carny cons ply their trade, looking to make a quick buck off the rubes. It’s unlike any other noir, there’s no private eyes or femme fatales here, and it’s well worth your time.

Now, just for the hell of it, here’s Rod Stweart’s 1984 dance hit “Infatuation”, featuring Mike Mazurki, the beautiful Kay Lenz, and Jeff Beck on guitar, from the days when MTV actually played MUSIC!: