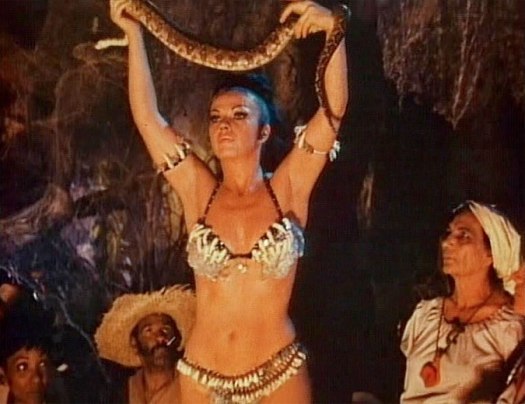 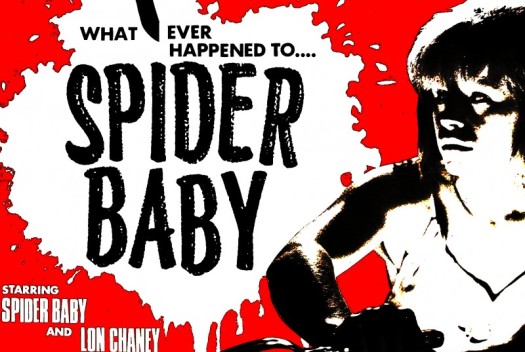 We learn in the beginning that the descendants of Ebeneezer Merrye are dying out due to the dreaded  “Merrye Syndrome”- a rare affliction causing it’s victims to regress to a sub-human, cannibalistic state. The always welcome Mantan Moreland is seen delivering a package to the creepy old Merrye house. Mantan does some of his tried-and-true “scaredy cat” schtick while looking around the deserted joint. He sticks his head in a window….and then the window slams shut, as young Virginia Merrye (Jill Banner) pops in, brandishing a net and knives. “I got you”, she gleefully yells, then procedes to hack and slash the hapless messenger to death. It’s a jolt, as the viewer expects Mantan to see a ghost or something and do his “feets don’t fail me now” routine. The violence immediately grabs the viewer’s attention, letting us know this isn’t your garden-variety horror spoof. 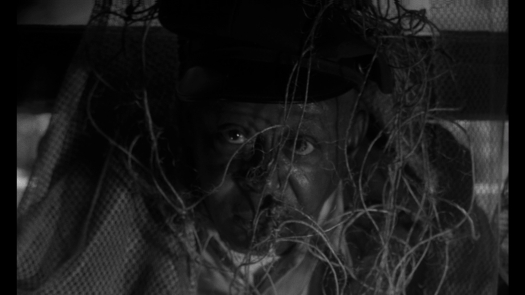 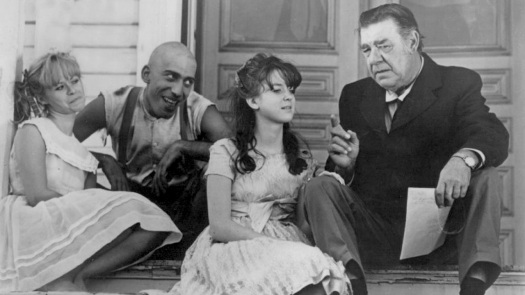 Emily Howe (sexy Carol Ohmart) and her brother Peter (Quinn Redeker) are Merrye cousins, and greedy Emily is looking to take control of the Merrye fortune. Peter waits in the car while bitchy Emily goes to the house. When she comes face-to-face with Ralph, she hightails it back to her brother! Bruno has picked up Schlocker and his secretary Ann (Mary Mitchel), but they’re delayed by the Highway Department “blasting” their way to a new road. Now everyone gets to meet the children, and Bruno explains about Merrye Syndrome. “It’s a regression of the brain”, he solemnly intones, “The unfortunate result of inbreeding”.

Schlocker tells Bruno the plan is to spend the night, then put these “retarded” Merryes in an instituation. Bruno objects, but is outnumbered. The kids concoct a dinner of bugs, weeds, a dead cat, and possibly poisonous mushrooms. All the guests pass save Peter, who’s pretty oblivious to the bizarre goings-on. Dinner conversation turns to horror films, as Ann and Peter discuss their favorites. “Dracula, Frankenstein..I love The Mummy. Step, scrape, step, scrape”. Chaney as Bruno is hilarious as someone mentions the Wolf Man. Looking out the window, he echoes his Larry Talbot character, warning, “There’s a full moon tonight”. 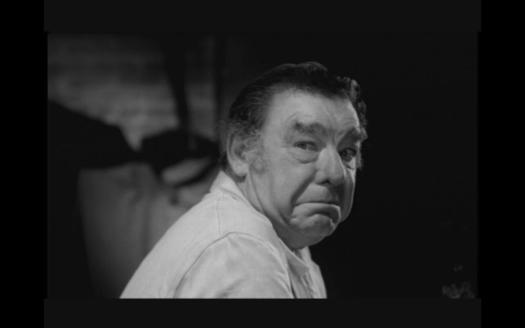 Peter and Ann head to a local motel since there aren’t enough beds available. Emily and her lawyer stay, thinking the whole thing is a hoax. Later that evening, Emily strips down to some sexy lingerie and dances alone in her room, unaware that Ralph is spying through the window. Schlocker takes a look around the house and finds a secret passageway to the basement. Things take a definite turn for the worst, as the children commit murder and mayhem. Peter and Ann return, and are placed in danger. They’re allowed to go free as Bruno has scored some dynamite from the construction site, promising the kids they’ll be together “forever and ever”. Bruno’s final solution blows the Merrye mansion and its occupants to smithereens, and the curse of the “Merrye Syndrome” is gone forever. Or is it??

Lon Chaney Jr. gives a poignant performance as Bruno. He’s gentle and kind to the demented children, loyal til the end. Chaney’s funny in the role, too, proving to his critics he wasn’t just a one-note actor. This was his last good film, as the remainder of his career consisted of B Westerns and Grade-Z crap. While Lon was on his way down, director Jack Hill was on his way up. A former UCLA film student, Hill became friends with fellow student Francis Ford Coppola, who introduced him to Roger Corman. Hill directed parts of The Terror  for Corman, then debuted with SPIDER BABY. After shooting four Mexican horror movies with Boris Karloff, Hill ushered in the “Women-in-Prison” genre with THE BIG DOLL HOUSE. His 70s Blaxploitation films with Pam Grier, COFFY and Foxy Brown are classics of the era. 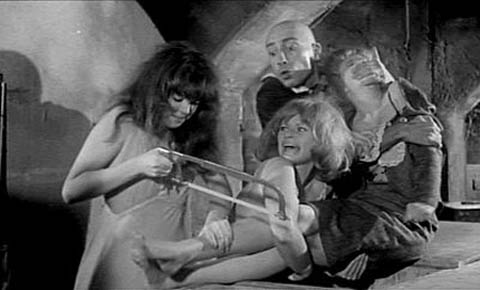 SPIDER BABY is that rare low-budget gem where everything works to perfection. The kids are genuinely scary in their roles, and Hill gets a moving performance from the declining Chaney. The rest of the cast shines as well. It’s unlike any horror comedy before or since, and should be on everybody’s Halloween watch list. 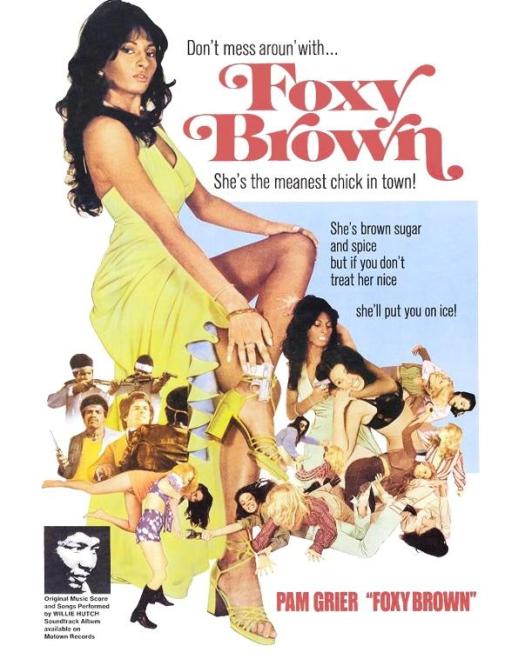 Foxy Brown is one bad-ass chick, and FOXY BROWN is one bad-ass movie! Action queen Pam Grier plays Foxy, who’s out to get the bad guys that killed her boyfriend Mike (Terry Carter), an undercover narc. Mike has had plastic surgery to disguise himself from the mob, but Foxy’s weasely brother Linc (Antonio Fargas, Huggy Bear of TV’s STARSKY & HUTCH) owes the villians twenty grand for a coke deal, so he drops a dime on Mike. The mob guns Mike down and Foxy is out for revenge! 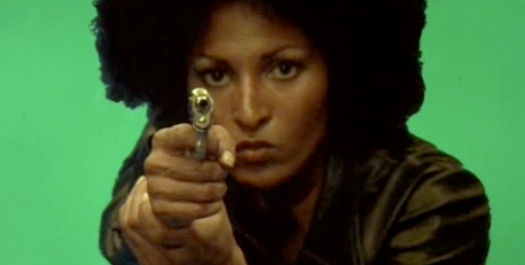 The gang is run by Miss Katherine and her man, Steve Elias. Foxy, as ‘Misty Cotton’, infiltrates their set-up. The dastardly duo run a ‘modeling agency’ as a front, using hookers to ‘persuade’ judges, politicians, and other authorities for protection for their dope racket. Foxy goes on an assignment with another hooker named Claudia (Juanita Brown) to seduce a judge, but the pair end up humiliating him instead! Foxy and  Claudia end up getting in cinema’s first lesbian barroom brawl (that I know of, anyway) and captured by the bad guys. Foxy is then doped up and sent to ‘The Ranch’, run by a couple of horndog redneck drug dealers, who rape and torture her. She escapes of course, being bad-ass and all, then finds out Elias and his crew have killed Linc and his coked out girlfriend. Foxy allies herself with the “Anti-Slavery Committee”, a group of righteous brothers battling dope pushers, and they take down Miss Katherine and her gang in a bloody, action packed climax. 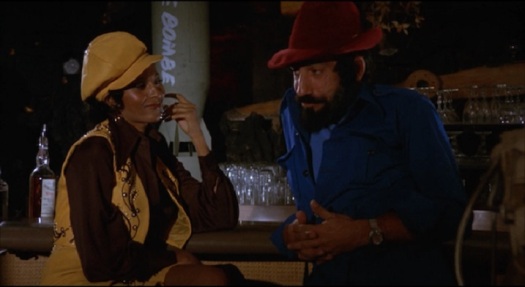 This was Grier’s fourth film with writer/director Jack Hill. The two pioneered the “women-in-prison” genre with THE BIG DOLL HOUSE and THE BIG BIRD CAGE, then scored big with the blaxploitationer COFFY. FOXY BROWN firmly established Grier as the top female action star, and she’s dynamite as always. Miss Katherine is played by Kathryn Loder, who was also a villainess in THE BIG DOLL HOUSE. Peter Brown (Elias) is mainly known for TV Westerns (THE LAWMAN and LAREDO), and his appearances on soap operas. The great Sid Haig has a cameo as a dope smuggling pilot, and ex-wrestler H.B. Haggerty is a hoot as one of the rednecks. Motown producer/arranger/songwriter Willie Hutch provides the funky soundtrack. 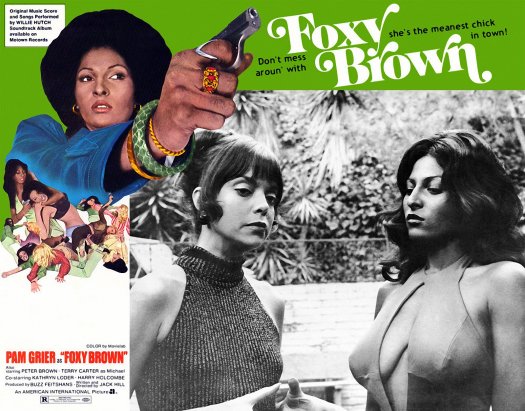 FOXY BROWN is loaded with 70s slang, outrageous fashions, and plenty of sex and violence. Like any good exploitation flick, there’s lots of gratuitous nudity, too. Blaxploitation fans won’t be disappointed, because FOXY BROWN is one of the genre’s best. Like the poster says, “Don’t mess aroun’ with…FOXY BROWN!”