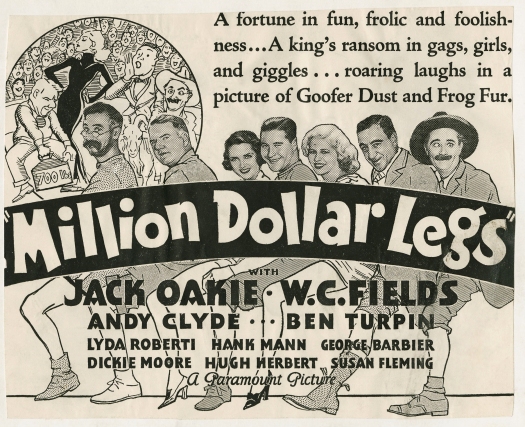 Hail, hail Klopstokia! MILLION DOLLAR LEGS is  total  movie anarchy, a throwback to the halcyon days of Mack Sennett. It’s a comedy cornucopia filled with sight gags and verbal nonsense, led by legendary W.C. Fields as president of the mythical country of Klopstokia, about to default on its loans until itinerant brush salesman Jack Oakie comes up with a plan to enter the hale and hearty Klopstokians in the 1932 Olympics and win the huge cash prize being put up by his employer!

Klopstokia is noted for “Goats & Nuts”, their chief exports, imports, and inhabitants! All political disputes are settled by arm wrestling, and President Fields is the strongest of all, though he’s constantly being challenged by his Secretary of the Treasury Hugh Herbert. Presidential daughter Angela (Susan Fleming, future wife of Harpo Marx) and brush salesman Migg Tweeny (Oakie) “meet cute” and immediately fall in love. When asking for her hand, Angela tells her dad she calls Migg “Sweetheart”, which the Prez mistakes for Migg’s real moniker! (Migg: “Listen, my name’s Tweeny” Prez: “You’ll always be ‘Sweetheart’ to me” Migg: “I know, I know, but there’s talk already…) 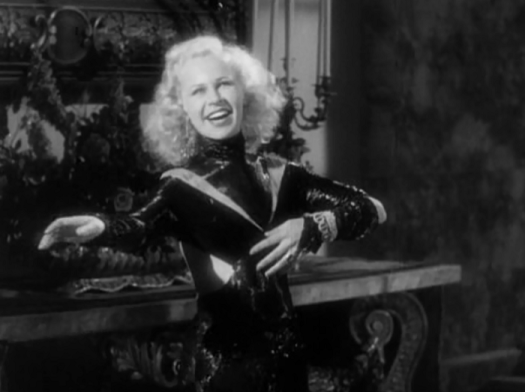 Secretary Herbert and his traitorous cabinet (including Keystone veterans Irving Bacon, Vernon Dent, and Billy Gilbert , who performs his comical sneeze routine) plot to put Klopstokia’s athletic team out of commission by hiring super-spy Mata Machree, “A Woman No Man Can Resist”! She’s played by luscious Lyda Roberti, parodying Garbo (who starred in 1931’s MATA HARI) and sings the risqué “When I Get Hot in Klopstokia”. You haven’t lived until you’ve seen lithe Lyda slink and wiggle her way to a man’s… err, heart.

You all know what a sucker I am for punny wordplay, and MILLION DOLLAR LEGS is loaded with it, thanks to screenwriters Henry Myers and future Oscar winner Joseph L. Mankiewicz . Here’s a couple of examples:

Angela: “In Klopstokia, we have another way of saying that”

Then there’s this: Angela: “All the girls in this country are named Angela, and all the men are named George”

Fields is a riot, as always, whether having troubles with his top hat, juggling clubs to stay in shape, or performing as a one-man band. Cross-eyed silent comedian Ben Turpin keeps popping up (for no reason!) as a cloak-and-dagger spy, Andy Clyde as Fields’ Major-Domo could give The Flash a run for his money, and little Dickie Moore steals whatever scenes he’s in as Angela’s brother Willie – apparently the only male in Klopstokia not named George!! All this absurdity is expertly handled by director Edward F. “Eddie” Cline, who went back to Mack Sennett’s Keystone Kops, and worked with nearly every great comic in history, from Chaplin and Keaton, to Wheeler & Woolsey and Olsen & Johnson, to the Ritz Brothers and the Andrews Sisters!

MILLION DOLLAR LEGS is sheer nonsense, and I mean that in the best way possible. Predating the Marx Brothers’ DUCK SOUP by a year, the film shares its anarchic spirit, and the two together would make a great double feature when you need to just cut loose and laugh. And we all need that in this day and age!! 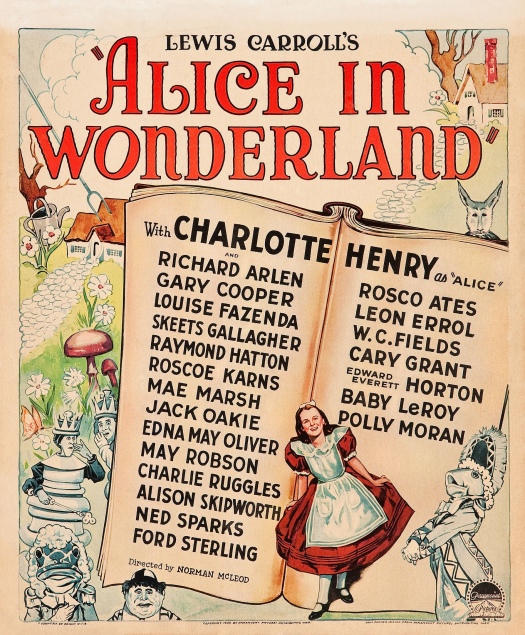 Lewis Carroll’s 1865 children’s classic ALICE IN WONDERLAND was turned into an all-star spectacular by Paramount in 1933. But the stars were mostly unrecognizable under heavy makeup and costumes, turning audiences off and causing the film to bomb at the box office. Seen today, the 1933 ALICE is a trippy visual delight for early movie buffs, thanks in large part to the art direction of William Cameron Menzies.

Menzies’ designs are truly out there, giving ALICE the surrealistic quality of the books themselves. He actually storyboarded his ideas right into the physical script, earning a co-writer credit along with Joseph L. Mankiewicz . Menzies was the cinematic wizard whose art direction brought the magical 1924 THE THIEF OF BAGDAD to life. He was co-director and special effects designer for 1932’s CHANDU THE MAGICIAN, and the title of Production Designer was invented for him on the classic GONE WITH THE WIND. Menzies also directed a few films; especially of note are the science fiction entries THINGS TO COME and INVADERS FROM MARS. 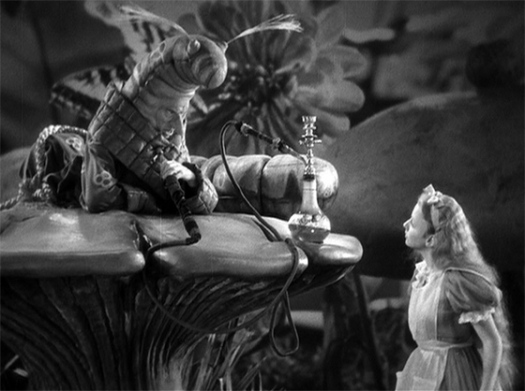 You all know the story: young Alice is snowed in and bored, daydreaming away the time. She falls asleep, and dreamily takes a trip through the looking glass, where everything is backwards, and the chess board comes to life. Alice goes outside and follows the White Rabbit (Skeets Gallagher) down the hole, where she encounters a strange world inhabited by Caterpillar (Ned Sparks), Frog (Sterling Holloway ), The Duchess (Alison Skipworth) and her baby (Billy Barty), The Cheshire Cat (Richard Arlen), The March Hare (Charlie Ruggles ), The Mad Hatter (Edward Everett Horton), The Doormouse (Jackie Searl), The King and Queen of Hearts (Alec B. Francis, May Robson), Gryphon (William Austin), The Mock Turtle (Cary Grant), The Red Queen (Edna May Oliver), The White Queen (Louise Fazenda), Tweedledee and Tweedledum (Roscoe Karns, Jack Oakie), Humpty Dumpty (W.C. Fields ), and The White Knight (Gary Cooper ) on her madcap journey through Wonderland. 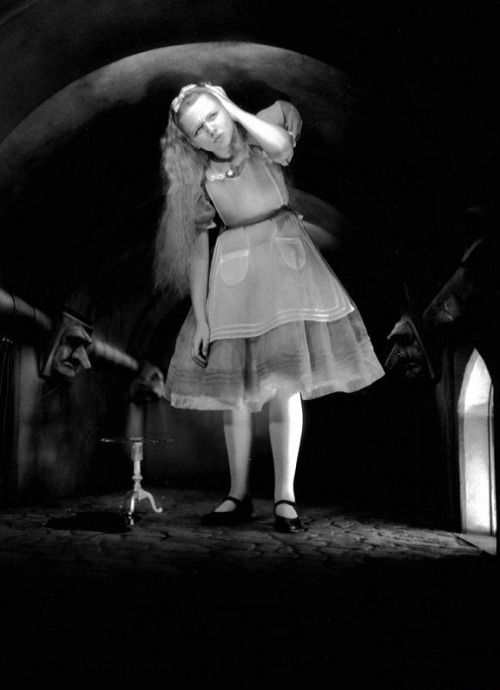 Nineteen year old Charlotte Henry stars as  twelve year old Alice, and she’s perfect in the part. In fact, she was too perfect, as she became so closely identified with Alice it was tough for her to get other roles. After costarring as Bo-Peep in Laurel & Hardy’s BABES IN TOYLAND (retitled MARCH OF THE WOODEN SOLDIERS), Henry appeared in CHARLIE CHAN AT THE OPERA (with Boris Karloff) and the Frank Buck serial JUNGLE MENACE before retiring from film at the age of 28. 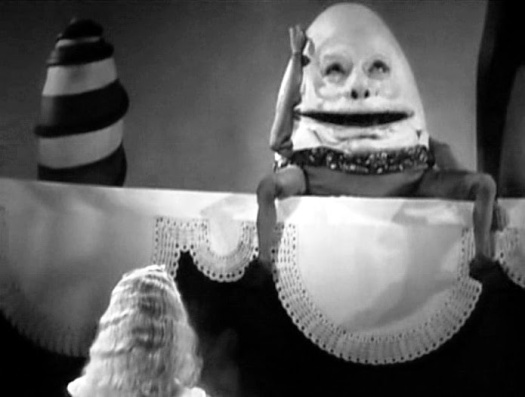 Film fanatics will be able to recognize many of the stars by their distinct voices. Grant, Cooper, and Fields (who’s my personal favorite) are easy, but true movie afficianados won’t have trouble finding Oakie, Ruggles, Horton, Holloway, or Oliver. Leon Errol , Roscoe Ates , Baby LeRoy, and Mae Marsh also take part in this hallucinogenic fantasy directed by Norman Z. McLeod. The director was a comedy specialist, working with greats like Fields (IT’S A GIFT, IF I HAD A MILLION), The Marx Brothers (MONKEY BUSINESS , HORSE FEATHERS), Bob Hope (THE ROAD TO RIO, THE PALEFACE), and Danny Kaye (THE KID FROM BROOKLYN, THE SECRET LIFE OF WALTER MITTY), and helming the classic ghost comedy TOPPER.

Besides the Fields and Cooper segments, one part of the film I really enjoyed was when Tweedledee and Tweedledum relate the story of The Walrus and The Carpenter to Alice. Here the movie veers off into animation by Hugh Harman and Rudoph Ising, a pair of Disney veterans who’d later inaugurate Warner’s Looney Tunes and Merrie Melodies cartoons. It’s a cute little vignette done by the animation pioneers, who later created such characters as Bosko and Barney Bear. ALICE IN WONDERLAND probably won’t appeal to those who’re enamored of CGI, but it was way ahead of its time, and is historically worth a look. After all, it isn’t every day you get a chances to see Cary Grant as The Mock Turtle or W.C. Fields as Humpty Dumpty, now is it?