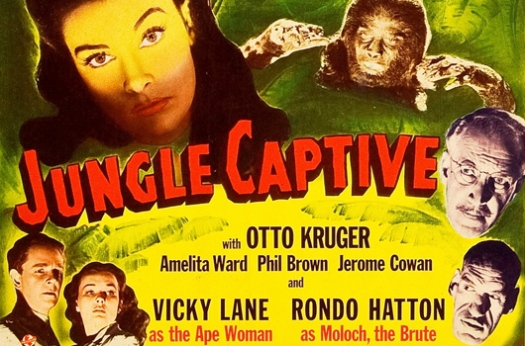 The third and final entry in Universal’s Paula Dupree/The Ape Woman series, JUNGLE CAPTIVE was released in 1945. I’m happy to report it’s a slight upgrade on JUNGLE WOMAN – by no means a classic horror movie, but certainly more enjoyable than that wretched sequel to CAPTIVE WILD WOMAN . The budget is lower-than-low, but the performances and script are far better, and it makes a good finale to the Ape Woman saga.

Hulking brute man Moloch, henchman of biochemist Mr. Stendahl (who’s not a doctor, by the way), strangles a morgue attendant and steals the body of the Ape Woman from it’s slab (where we left it in the last film). Inspector Harrigan is called in on the case, and a lab smock found near the abandoned crashed-and-burned meat wagon leads him to Stendahl’s lab, where he encounters pretty assistant Ann and her fiancé Don working (actually, they’re necking when he barges in!. Don becomes a suspect, even more so when Ann doesn’t return home one night. In reality, Stendahl has kidnapped her and brought her to his country estate, planning on reviving the monster by using her blood!

The mad non-doctor succeeds, but Paula is in a semi-catatonic state, so he has Moloch (who feels pity for Ann) kill Dr. Fletcher (remember him from JUNGLE WOMAN?) and steal the diaries of Dr. Walters (remember him from CAPTIVE WILD WOMAN? Yep, we got some continuity going on!). Paula’s “brain is gone”, so Stendahl figures it’s time for a brain transplant… sorry, Ann! When Paula escapes through a window, Moloch rushes to the city to find Stendahl, instead finding Don, who notices his frat pin on Moloch’s lapel, and follows the brute to Stendahl’s place, where things really get ugly…

Acquanetta is gone, replaced here by Vicky Lane, who does well as the snarling beast behind Jack Pierce’s makeup. There’s not much information out there on Miss Lane (1926-1983), except that she made six films (mostly uncredited), was married to volatile actor Tom Neal (DETOUR ) from 1944-49, then to noted jazz musician Pete Candoli from 1953-58, with whom she recorded some jazz singles and an LP, including this sexy number:

As Joe E. Brown said in SOME LIKE IT HOT, “Zowie”! Otto Kruger plays the arrogant not-a-doctor Stendahl, Jerome Cowan is good as the intrepid Harrigan, and Amelita Ward (Leo Gorcey’s spouse) and Phil Brown (STAR WARS’ Uncle Owen) are Ann and Don. Then there’s Rondo Hatton, Universal’s latest horror sensation, playing a variation of his “Creeper” character as the murderous Moloch. I’ll have much more to say about the unfortunate Mr. Hatton on Sunday, I promise, so stay tuned… 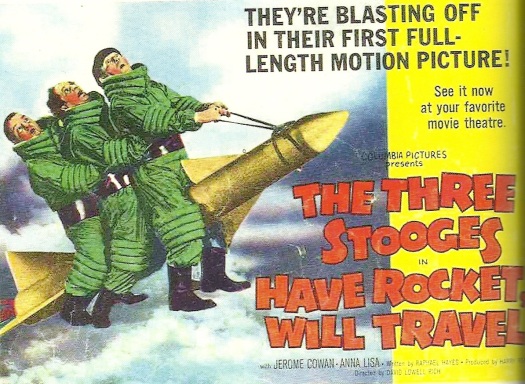 My DirecTV receiver decided to fry itself the other day. A new one won’t be shipped for another five days – no TCM, no DVR’d movies, no Red Sox, no nothin’! What’s a film blogger to do? Since my DVD player isn’t working either, I thought I’d reach into my collection of VHS tapes and see what I could come up with for viewing. Hmm, let’s see… wait a sec, what’s this? An unopened copy of HAVE ROCKET, WILL TRAVEL, the Three Stooges  comeback starring feature! Good Lord, I haven’t seen this movie in years! The Stooges it is!

A little background first: after making shorts for Columbia since 1934, the studio dumped the trio when their contract ended in 1957. Television had killed the short subject market, and the boys were thrown out on their collective keisters. Ironically, it was television that revived their career when the Stooges shorts were released to TV a year later, and a whole new generation fell in love with their physical slapstick brand of humor. Moe Howard and Larry Fine recruited burlesque comic Joe DeRita (who had his own series of Columbia shorts in the 40’s) to replace Joe Besser. DeRita was a better fit than Besser anyway, and his resemblance to Curly Howard (always the most popular Stooge) led to him being dubbed Curly Joe. The reconfigured Stooges toured successfully, and Columbia came crawling back to star them in a feature film titled HAVE ROCKET, WILL TRAVEL.

HAVE ROCKET, WILL TRAVEL isn’t vintage Stooges, but it’s not half bad, either. The Stooges are bumbling janitors at the “National Space Foundation” who are accidentally locked in a rocket ship and blast-off for Venus, encountering a giant fire-breathing tarantula, a talking unicorn, and a robot super-computer who shrinks them to mouse-size and makes android clones of them. They return to Earth as heroes, are given a ticker-tape parade and a gala celebration, a distinguished affair that devolves into a slap-happy donnybrook. The whole thing gives them an excuse to trot some of their old schtick like the “plumbing” gag, the “chased through multiple doors” gag, and the “couch-spring-stuck-in-the-rear-end” gag. They even get to exercise their tonsils, breaking into song about halfway through, a ditty called… what else, “Have Rocket, Will Travel”! 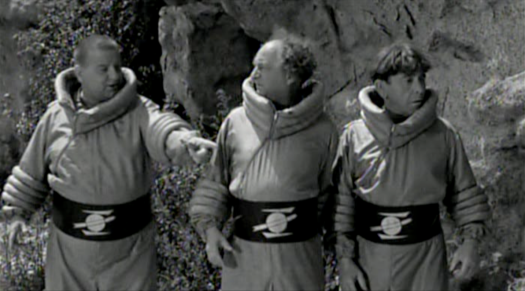 The Stooges are a bit more kinder and gentler here, older but definitely not wiser. The familiar eye pokes, hair-pulling, and face slapping are still around, as are the familiar sound effects, and Moe still hurls insults at his partners (at one point calling Curly Joe “ya baby hippopotamus”). Robert Colbert (later of TV’s THE TIME TUNNEL) and Anna-Lisa provide the romance, while veteran character actor Jerome Cowan takes his lumps as the Stooges’ foil, head of the space foundation. HAVE ROCKET, WILL TRAVEL was aimed directly at their new juvenile audience and is ultra low-budget, with cheezy special effects and cardboard sets, but fans of the boys will enjoy revisiting their antics. I know I sure did!