Rugged Robert Mitchum is pretty much the whole show in MAN WITH THE GUN, a film by first  time director (and Orson Welles protege) Richard Wilson. It seems a strange choice at this juncture of Mitchum’s career. He was just coming off four big films in a row (RIVER OF NO RETURN, TRACK OF THE CAT, NOT AS A STRANGER, NIGHT OF THE HUNTER ), then makes a low budget Western that harkens back to his days making ‘B’ Zane Grey Westerns at RKO. But that was Mitchum; always the maverick who did things his way.

The film itself isn’t bad: Mitchum plays a notorious gunslinger, a “town tamer” hired by Sheridan City to clean things up from the clutches of boss ‘Dade Holman’ (who isn’t seen til the end, but whose influence is everywhere). There’s a subplot with his ex-wife Jan Sterling, now running the dance hall girls at The Palace, and the whereabouts of their five year old daughter. Another subplot involves Karen Sharpe, daughter of town council leader Emile Meyer, catching feelings for Mitchum, to the chagrin of her young, headstrong fiance  John Lupton. But don’t let the soap opera elements fool you: MAN WITH THE GUN is an exercise in violence, with Mitchum a killing machine who has no problem mowing down bad guys. Wilson and N.B. Stone Jr’s script dips briefly into the psychological reasons Mitchum’s character does what he does, making him more than just a one-dimensional gun-for-hire. 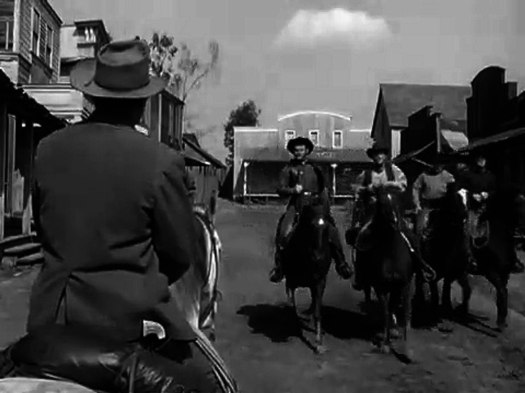 Wilson had helped stage plays for Welles’ Mercury Theater of the Air, and worked as Welles’ assistant on CITIZEN KANE and THE MAGNIFICENT AMBERSONS, and associate producer on LADY FROM SHANGHAI and MACBETH. He completed the documentary IT’S ALL TRUE: BASED ON AN UNFINISHED FILM BY ORSON WELLES shortly before his death in 1991, and appears posthumously in THE OTHER SIDE OF THE WIND . While he’s no Welles, Wilson manages to create some moody, almost film noir-ish scenes with the help of ace cinematographer Lee Garmes (the burning down of The Palace in particular is well staged). His directorial filmography is skimpy, but includes some interesting vehicles, like THE BIG BOODLE (starring a dissipated Errol Flynn), AL CAPONE (with Rod Steiger as Scarface), the well-regarded noir PAY OR DIE, and the AIP sex romp THREE IN THE ATTIC.

MAN WITH THE GUN also benefits from a supporting cast of Familiar Faces, including veteran Henry Hull as the ineffective town marshal, Ted de Corsia as the Palace’s manager (complete with bad French accent!), Leo Gordon and Claude Akins as heavies, young Angie Dickinson as a saloon girl, and Jay Adler, Barbara Lawrence (as a dizzy blonde), Burt Mustin, Maidie Norman, Maudie Prickett, Stafford Repp, Buddy Roosevelt, Amzie Strickland, and James Westerfield (who sets up the film’s finale). The film’s no classic, but will satisfy fans of both Westerns in general, and Robert Mitchum in particular. I fall into both categories, so of course I liked it; the rest of you will have to watch and judge for yourselves!