REBECCA is unquestionably a cinematic masterpiece. I remember watching it for the first time in a high school film class, enthralled as much by its technical aspects as the story itself. This was Alfred Hitchcock’s  first American film, though with a decidedly British flavor, and his only to win the Best Picture Oscar. There’s a lot of film noir shadings to this adaptation of Daphne DuMaurier’s  Gothic novel, as well as that distinctive Hitchcock Touch.

“Last night I dreamt I went to Manderley again”, begins Joan Fontaine’s narration, as the camera pans down a dark road overgrown with brush and weeds, fog rolling in all around, as we come up on the once majestic castle called Manderley, now lying in ruins. This first shot was all done with miniatures, another wonderful example of Hitchcock’s innovative use of the camera, looking and feeling totally believable (take that, CGI!). Flashbacks bring us to when Fontaine’s character, who’s never given a proper name in the film except “The Second Mrs. de Winter”, comes across her future husband Maxim de Winter standing at the precipice of a cliff, contemplating suicide.

Maxim of course is played by the great Laurence Olivier , as tragic a romantic Gothic hero as you’ll ever find (and I include his role as Heathcliff in the previous years WUTHERING HEIGHTS in that statement). His wife, Rebecca, has recently died in a horrible boating accident, and the brooding de Winter is in Monte Carlo trying to forget. Maxim takes a shine to the young girl, a “paid companion” to snooty Mrs. Van Hopper (Florence Bates) and, after a whirlwind courtship, asks the girl to marry him. She accepts, and the couple return to England and de Winter’s lavish estate Manderley.

The servants are all welcoming to Maxim’s new bride… all but one, that is. That would be Mrs. Danvers, head housekeeper, played to icy perfection by Judith Anderson . The ghoulish Mrs. Danvers gives the second Mrs. de Winter (and us) the creeps, as she slavishly devotes herself to Rebecca’s memory, lovingly caressing the dead woman’s clothing, keeping all her monogrammed possessions on display, and sabotaging the new bride’s costume ball. Anderson is disturbingly sinister as Mrs. Danvers, a role so iconic it’s been parodied time and again in movies and television skits, notably in 1946’s THE TIME OF THEIR LIVES, when Lou Costello says to similarly creepy housekeeper Gale Sondergaard, “Didn’t I see you in REBECCA?”.

Things take a wrong turn for Maxim when Rebecca’s body is found in a capsized boat, though he’d earlier identified his late wife’s body elsewhere. This is when the truth about Rebecca finally comes out in a scene inside a seashore cabin, Maxim among Rebecca’s old things, as he tells his new wife the real story behind Rebecca’s death (there’ll be no spoilers, just watch the movie!). Olivier is brilliant in this scene, as are Hitchcock and his cinematographer George Barnes, who won an Oscar for his work.

George Sanders is on hand as Rebecca’s “cousin” Jack Favell, a cad and a bounder who plays an integral part in the plot. Sanders always excelled in this type of role, and his Favell is one of his most memorable scoundrels. The supporting cast features such British Familiar Faces as Nigel Bruce , Leo G. Carroll , Gladys Cooper, Melville Cooper, Lumsden Hare, Reginald Denny , Forrester Harvey, and C. Aubrey Smith. Franz Waxman’s haunting score is among his very best, and that’s saying a lot. Waxman was the man behind the baton for classic scores like BRIDE OF FRANKENSTEIN, SUSPICION, HUMORESQUE, and SUNSET BOULEVARD, to name just a few. 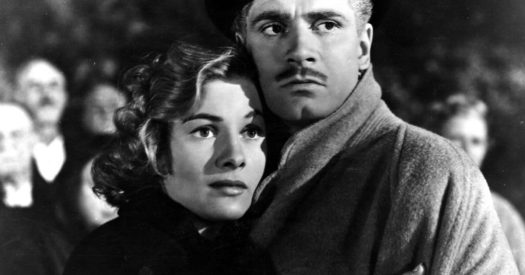 Producer David O. Selznick and director Hitchcock had totally different approaches to filmmaking, and frequently clashed during REBECCA’s production. Hitchcock had a rocky relationship with Selznick, and in all the time he spent under contract to the producer, Selznick only used him for this, SPELLBOUND, and THE PARADINE CASE. All of the director’s other 40’s output was made on loan out until his contract expired in 1947. While the other two collaborations have their flaws, REBECCA is perfection in all respects, a film classic that has stood the test of time and essential viewing for movie lovers. You don’t come across films of this caliber very often, so if you have never seen REBECCA, I urge you to do so soon as possible. You will not be disappointed.

Sherlock Holmes has long been a favorite literary character of mine. As a youth, I devoured the Sir Arthur Conan Doyle stories, marveling at the sleuth’s powers of observation and deduction. I reveled in the classic Universal film series starring Basil Rathbone and Nigel Bruce as Holmes and Watson, and still enjoy them today. I read Nicholas Meyer’s 1974 novel “The Seven-Per-Cent Solution” as a teen, where a coked-out Holmes is lured by Watson to Vienna to have the famed Sigmund Freud cure the detective of his addiction, getting enmeshed in mystery along the way. I’d never viewed the film version until recently, and while Meyer’s screenplay isn’t completely faithful to his book, THE SEVEN-PER-CENT SOLUTION is one of those rare instances where the movie is better than the novel.

This is due in large part to a pitch-perfect cast, led by Nicol Williamson’s superb performance as Sherlock. We see Holmes at his worst, shooting coke like a maniac, jittery and on edge, babbling with wild-eyed intensity about “my nemesis, my evil genius”, the criminal mastermind Professor Moriarty. He’s paranoid and delusional, and Williamson brilliantly captures a man in the throes of cocaine-induced mania (trust me on this). Slowly but surely, with the help of the equally brilliant Freud, Holmes regains his sanity, and his deductive reasoning returns strong as ever. Williamson’s Holmes recalls the great Rathbone’s interpretation of the sleuth; indeed, the film as a whole will remind you of those 40’s films, albeit with a much, much larger budget.

Besides the acting, this film is visually beautiful, with a lavish production design by Ken Adam, art direction by Robert Lamont, and Oscar nominated costuming by Alan Barrett, all stunningly filmed by cinematographer Oswald Morris, whose credits include MOBY DICK, HEAVEN KNOWS MR. ALLISON, THE GUNS OF NAVARONE, LOLITA, and OLIVER!. Producer/director Herbert Ross’s background as a former choreographer comes in handy, gracefully guiding the players through their paces. Ross never really got the acclaim other directors of his era did, despite a solid track record of hit comedies (THE OWL AND THE PUSSYCAT, THE SUNSHINE BOYS, THE GOODBYE GIRL), musicals (FUNNY LADY, FOOTLOOSE), and dramas (THE TURNING POINT, STEEL MAGNOLIAS). 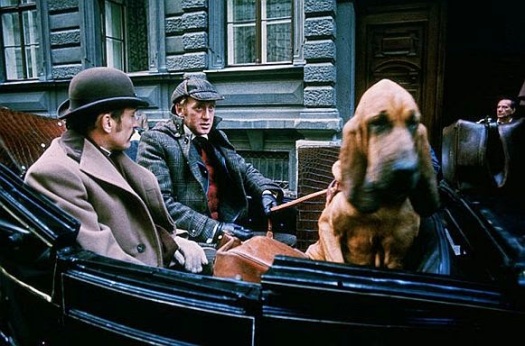 There are references to the Doyle stories peppered throughout the film for Sherlockphiles, and the climactic train chase, complete with a fencing duel atop a speeding locomotive, is loads of fun. Anyone who enjoys the current BBC version starring Benedict Cumberbatch or the CBS adaptation ELEMENTARY will have a grand old time viewing THE SEVEN-PER-CENT SOLUTION.